About midnight the storms that were supposed to go around us hit and hit hard. The lightening was so often that it looked like a weird SciFi daylight film.

Charlie had a conniption fit. The nonstop thunder unnerved the poor fella. I got up and comforted him as best I could. Rich got up and Charlie decided he was his savior.

We watched the storm as best we could and at times we couldn't see past the porch either from the rain or a fog. Or was it both? We had winds. 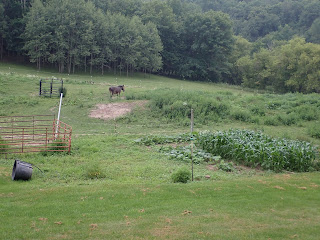 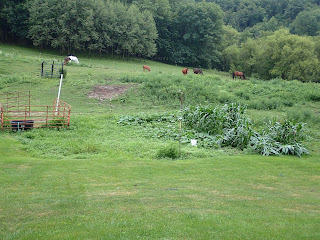 So the damage around our place was mostly to the trees. I'd moved Lil Richard and Sven out of one of the little paddocks I have for them to the Shed Pens. Sven can get into his little indoor area through a large 'goat'/doggy type door. And Lil Richard can maneuver around to get out of inclement weather.
[He is the only equine that will behave inside a stall in the winter..the mules try to tear the indoor pen apart]
Seems the dead ash trees to the northeast threw their branches at Lil Richard. He showed me the tiny mess when I checked on him. Sven was still sleeping. 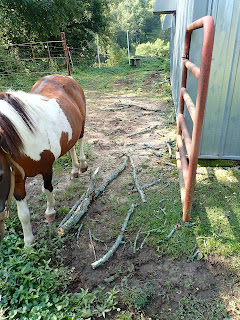 The pen that I moved them out of had a new tree top in it. 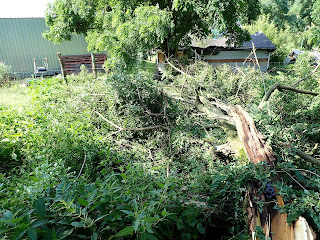 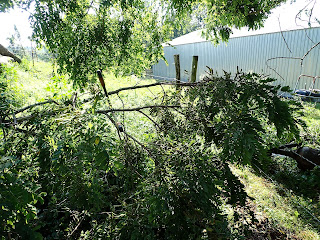 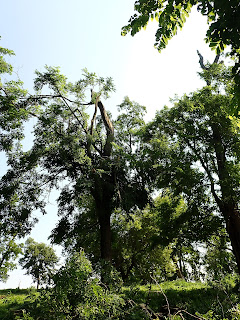 This was Thor's old pen and the tree to the right was the one that was struck by lightening a few years ago.
I spent an hour or so just picking up branches and debri to toss over the fence to the mules and even to Sven. They all eat the leaves, so they do a pretty good clean up. I just have to pick up the branches later and toss them on my fall burn pile. 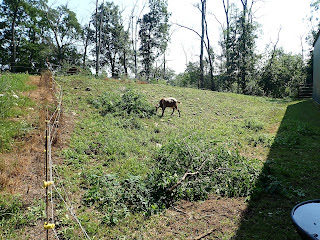 There was actually more than anyone could eat so I dragged them off the hot wire and just left them be. 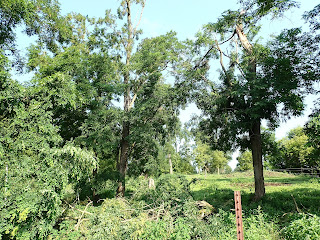 I grabbed a hand saw, a machete, and the heavy duty loppers. Off to the woods I went to check on the rest of the fence. One nice thing about this rope hot wire is that it is a cinch to fix. It generally doesn't break, but will sag and just needs tightening. I usually have to replace the plastic insulators that will break before the wire.
This box elder and another locust split and fell in the forest pasture. I'll let the mules eat the leaves off of them if they want to and then this fall hand saw it up. No chain saw for me and I know my neighbor would help, but he has had a stressful year at his work. I won't ask for help.
It will be good for me to have a late fall project. 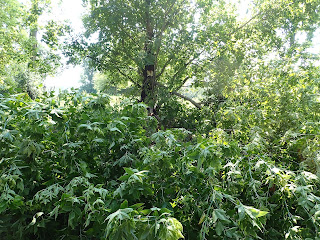 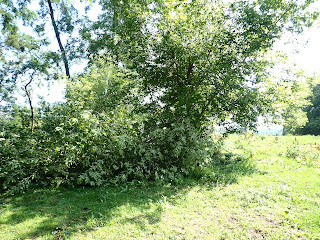 I went all the way around the whole fence and chopped weeds off from some places and stopped to eat black berries! It started to get 'close' and I could feel myself heating up. Long sleeves, long pants, boots, and gloves... phew...
I found cool fungi and wondered what these were. I will try to ID them at a later time. 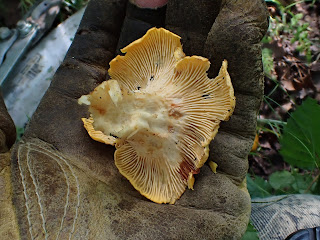 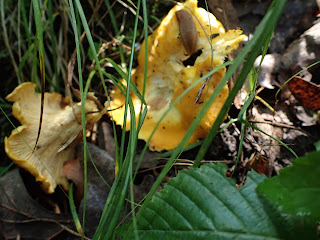 Ohhhh! And next to the top of a split oak, I found this on a log. I can't wait to get back to the woods and explore instead of checking fences!
Who doesn't love the brilliant colors of slime mold! 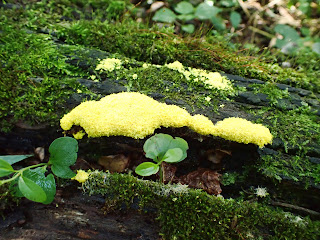 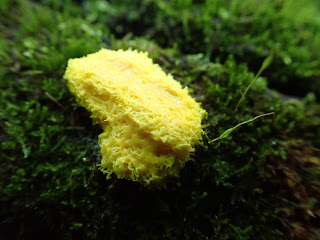 I got back to the house just in time to have lunch. I got an alert on my phone regarding Air Quality. They were not kidding. Cell Phone photo of what we first thought was fog. I went back out and man...IT smelled like burning plastic and wood. 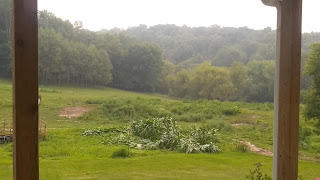 And...
It did get much worse.
This was at 2pm when I went out for a few moments to pick some Queen Anne's Lace and Fleabane for a wild white bouquet. 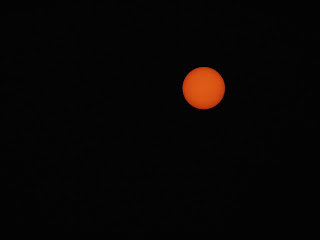 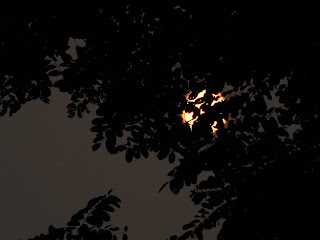 That air was bad and I stayed in until late evening.
I worked on a project of dying Queen Anne's Lace and trying to figure out how to dry them for this winter.

The haze and smoke let up a bit before sunset so I spent a little time watching the birds. 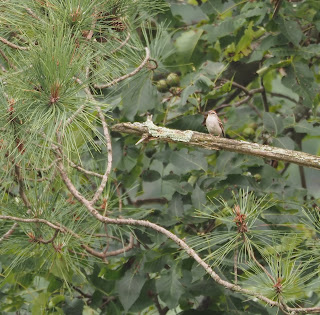 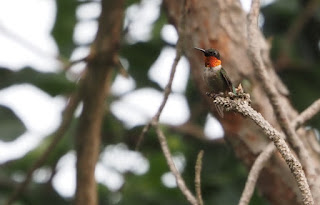 This morning there was nothing but an orange haze that turned into a grey overcast sky with another Air Quality Alert.
I'm bummed.
This weekend it looks like I will spend my hours mowing. According to the NOAA we are to experience times of heavy smoke.
So I'll mow and stop and do something crafty? The garden is toast so I will let it be, the squash and cukes can grow without much more help from me.
My flower garden took a huge hit too. The rain decimated most of my petunias and the winds flattened my 4 o'clocks. Once it dries out [2.5 inches of rain] I'll see what I can do to revive it.
Pfft.
Onward.