So I just wandered the other day. Well, I didn't wander OFF. But I just took random deer trails through the forest with no destination in mind. I would walk a bit and then stand still. 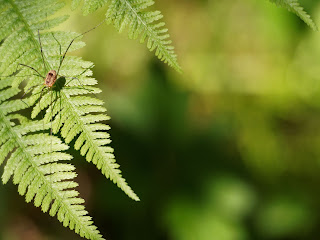 I wonder if a daddy long legs is considered wildlife.
I stood above the creek and just listened for a while. The water was barely moving from the west side of the fence. It pooled below me and then disappeared into the grass and jewel weed that grew in the creek bed.
The afternoon sunlight filtered through the green leaves and I just stood there thinking how beautiful the light and various shades of green were. So calming.
I think I may even put this photo on a large mounted board. I usually print a favorite shot each year and put it up. I think during the cold winter months, this photo may just bring me back to that very peaceful 'green' spot. 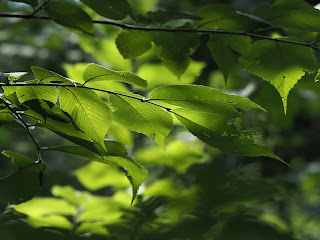 In an unexpected place in the back pasture I found a Monarch caterpillar. 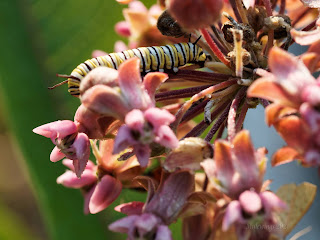 There were the hideously ugly looking brown prickly looking caterpillars too. They were interesting. I'd seen them over the years but had never bothered to figure out what there were.
Until this year.
[Milkweed Tussock Moth Caterpillars] 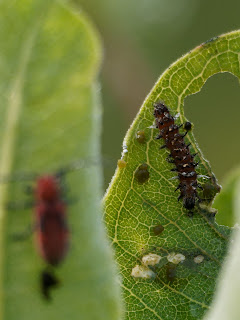 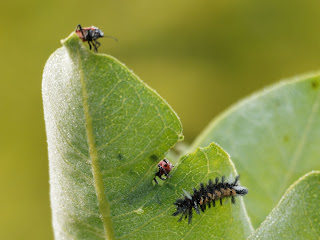 The reddish insect is an asparagus beetle. It probably has a long scientific name, but I like it fine as the red insect with black polka dots.
Monday morning found me out wandering the pastures again. The morning light was really quite bizarre.
I'm pretty sure these types of photos are flooding the social media because of the wildfires and the smoke in the air.
[I don't think the air quality is good for Rich to be outside doing work right now. So maybe the broken lawn mower is a good thing. I spoke with Mark and he'll pick it up and fix it along with a nice overall maintenance job on it.]
My thought was the sunrise seemed sort of like a Hollywood scene from some sort of Armageddon type movie. 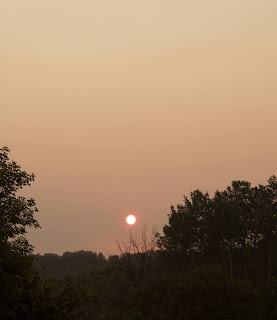 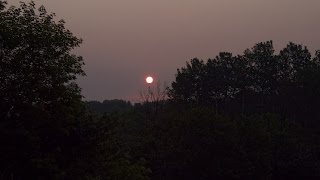 It just felt creepy as all get out. 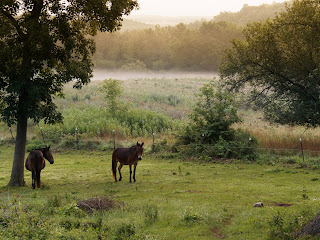 Most of the day was odd too. The sky wasn't blue, but more of a pale washed out color.
I went out to move the pony and put the goat in his pen after supper. The clouds had left and there was this orange washed out odd color to the sky again. 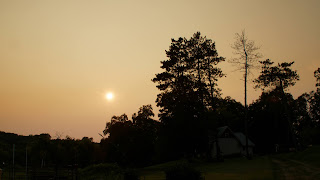 Skies like this give me an uneasy feeling.
On a happy note....I chased a Monarch yesterday for a while. It was so shy!
It played hide n' go seek! 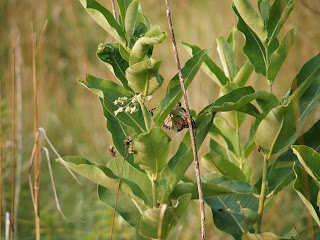