This is just going to be about things I've seen over the past week including things of beauty, things that make me curious and things I photographed just because.

Wednesday's storm front. I was on the way to CrossFit when I saw that I was driving into the heart of a huge cell. The closer I got to town, the meaner it looked. According to the weather service it was to go northeast of us.
I don't like storms, I don't like to be in storms.
I've been in two tornadoes and one really exceptional storm in 2007. 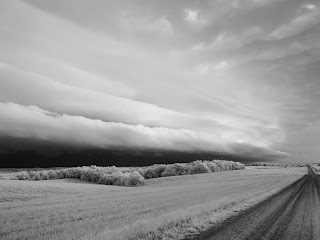 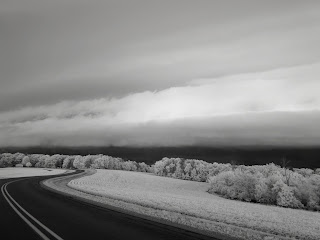 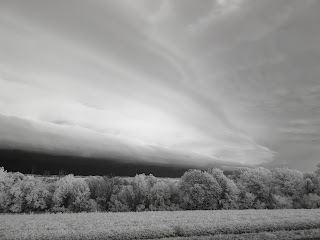 I pulled over to the side of the road and grabbed my camera. I only had my IR camera with the 850nm filter. It really only captures stark black and white and really highlights details in clouds. We had some winds when the front came through along with rain but thankfully no damage.
Other areas had hail and up to 3 inches of hard quick rain.
Shot of the neighbor's cattle pasture at dawn. Yes, the cow in the middle of the photo is pooping. 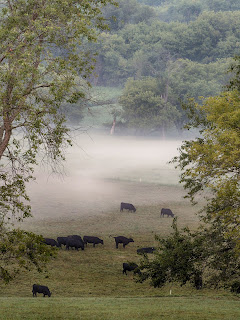 Dogwood. I found some! 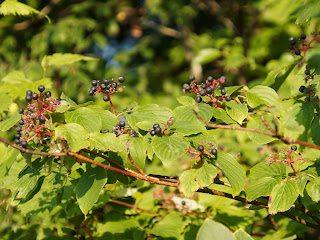 Wild Grapes! They look plentiful and I wonder about making grape jelly.
That would take a LOT! 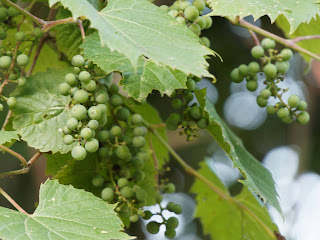 Sumac. It looks like it wants to start turning colors! Heat and drought stress? 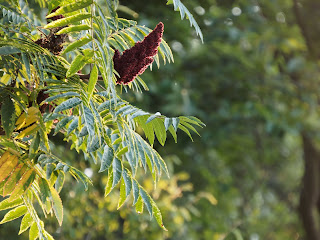 Elderberry flowers. Most are done flowering now and the berries are turning dark. This one had a tiny bee on it. 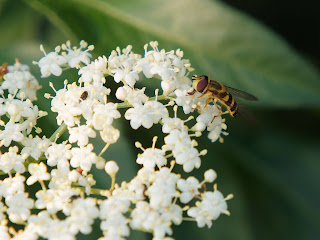 Queen Anne's Lace in the meadow across the fence to the east of us. 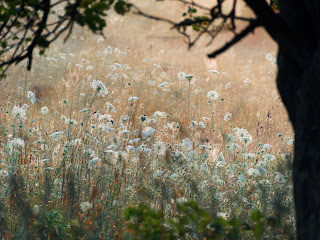 Ohhhh!
Chicken of the Woods? I saw it, I didn't pick it because it was too beautiful. However I would like to have an expert by my side to try something like this. 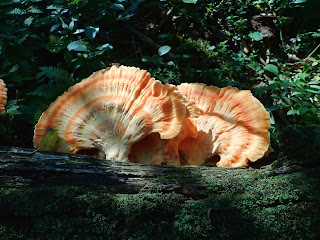 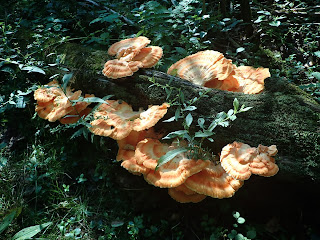 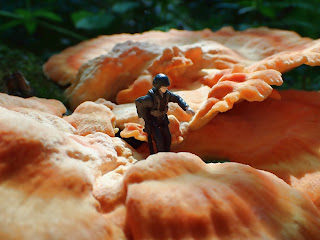 Apparently my soldiers will keep an eye on it. It was too bloody hot and stormy to continue wandering around the woods with the heat and 'thick' air. But I will get back to it!
Indian Pipes! Generally they grow near an old oak's roots especially those oaks that have 'health' issues. Interesting to note that so many life forms are so intertwined with the forest like that. I mean I knew it, but I didn't KNOW it. Moving right along.
Last thing.
The storm Wednesday night. Uffdah. The winds were pretty nasty so it looks like today is my day to go see if trees fell on the fence. Our corn was flattened and I found branches this morning down by the stock tank which is over 100 ft from the trees in one direction. Branches were down in another direction too and some found way out east of the house. No damage to buildings but small branches on top of the shed too! Interesting. You may be able to guess what I will write about later!