Wednesday.... I just looked at all the weather alerts that I was getting. 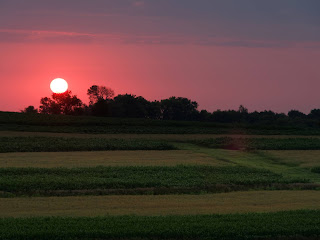 A red sunrise can mean that a high pressure system has already passed. It may indicate that a storm system may be moving to the east. A morning sky that is deep fiery red can indicate that there is high water content in the atmosphere [or heavy smoke?]. Rain could be on its way.

Well, rain was on its way along with the possibility of straight line winds, heavy downpours, hail, and other great stuff like lightening. On my way home from CrossFit I parked and took a shot with the IR camera of the first wave of storms.
Infrared is pretty cool for showing cloud textures. 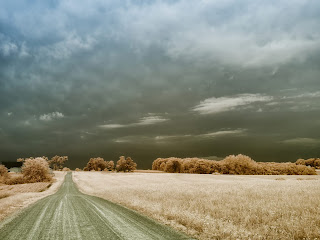 The Turkeys and Turk...lettes were headed for the woods. 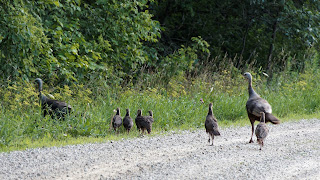 The mules moved down into the wooded area for a bit. 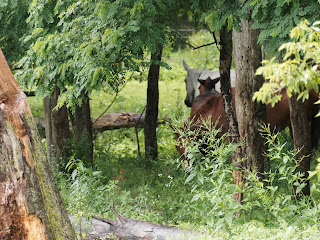 And when the winds passed, they moved out to the pasture and went about their business. I can tell what is coming by how the mules act. If something nasty is on its way they literally run for shelter.
They were rather unconcerned with the heavy rainfall and fog that rolled through. 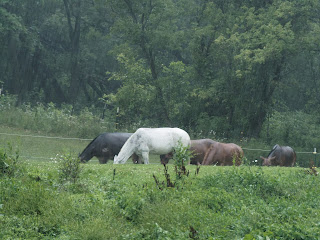 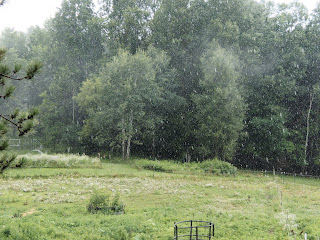 The rains came hard and then let up and came hard off and on for hours. The thunder and lightening continued to boom and shake the house.
Poor Charlie required a lap to sit in while he quaked.
Alerts went out as the County police and workers closed highway 56 in multiple places where water was coming over the road and tree 'parts' littered the highway.
Just another stormy day in Vernon County.
Charlie and I will head out to check the forest fences the creek after it gets a bit brighter out.
With this rain the fungi ought to burst forth in the woods too!
Time to look for slugs and bugs!
Posted by Val Ewing at 6:50 AM
Labels: another day, clouds, infrared camera, rain, red sky, storm, sunrise, Thunder