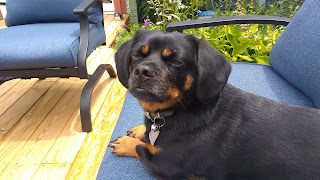 The idea was this. I get in the car in the morning and head south to southeast with an eventual destination of Kenosha/Racine county.

I got to Spring Green and saw an interesting road and went south. It meandered all over the place. It twisted and turned and led me past beautiful homes tucked in the hillsides. I saw mostly crop farms and almost no dairy. I came to an intersection of county roads. Road Closed, it said, BRIDGE OUT! Okay.
The tiny road to the left looked interesting and I followed it.

I couldn't find a safe place to pull over and take photos. But that was not my intent anyway. I just wanted to go, play music and drive the backroads without a time frame imposed on me.

Eventually I ended up at Mt. Horeb and saw a sign for a county park. I followed the signs and we stopped. My idea had been to find a drive thru and grab something to eat. Instead, Charlie had some dog cookies and I had water to drink.

We walked along the hiking trails and observed some Canada Geese.

As we got back to where I had parked, a family pulled up and got out of their vehicle. The kids said something to the Grandpa and he told them to 'Ask if they could see the puppy.'

This was the first of many Charlie/kid/people/ petting encounters on our trip.

We ended our road trip at my son's house. His dog Teslin saw Charlie and turned around and went upstairs to bed. Teslin is somewhere in the 16 to 17 year old range. She wanted nothing to do with a bouncy young dog.

My son took me for a drive and we ended up at Kenosha Public Brewery. I don't know if I'll get this all right, but there is a unique master plan to revitalize downtown Kenosha. And I have to say, it is working.

Now don't freak out. If you google Kenosha, WI, you will find all sorts of things about the riots, the shooting of Jacob Blake and the murders by Kyle Rittenhouse. I'm only going to say this. The town did not burn down. Yes some buildings were destroyed and people from outside of Kenosha caused a lot of problems.

I do have a long range plan to move back to Kenosha.

BUT it is a scary place! [I've been told all about it from folks who don't know this city] Yes, that is why [thanks for saying this Ed] Jockey International put there headquarters there. 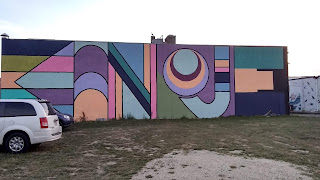 Okay. The building in the above photo is the original spelling of Kenosha. Kinoja or as this painted building says Kinoje.

This photo is in an alley way as we walked between buildings to go to another pub. 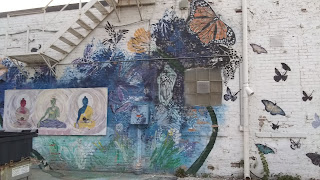 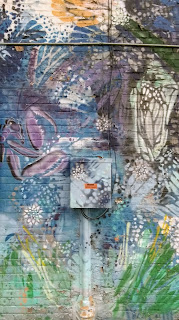 Enough said about K-Town. It really is a rich and diverse place. There is always something going on.

I made it to Eddie's house just fine.

The scenery and atmosphere was completely different than the farm. I could walk around with Eddie downtown and see the sites.

And for the first time in nearly 500 days, I felt unencumbered.

I had checked in with Rich and he was fine, the neighbor girl had called down to see how he was and she brought him some homemade airfryer french-fries.

Posted by Val Ewing at 5:38 AM
Labels: adventure, away from home, backroads, Eddies, K-town, out and about, random driving, visit