First there was the fun. While driving back from town after CrossFit I took a county road that had been closed for almost 5 years while FEMA told our township that they would only pay for them to put the little bridge back to the way it was. Um. Yeah, the bridge that failed in the 2016 flash flooding that didn't make the news.

See the structure in the middle? Twisted and torn with the road washed out on each side. This was not the historic flood of 2018 which traveled down a different watershed path. 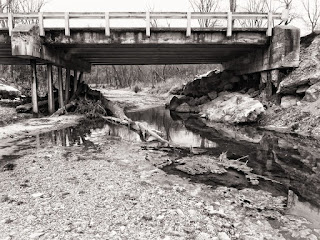 Annnnnywaaaaay. The Road was now open after 5 years of being closed. I thought I'd enjoy a drive up from the valley to the ridge.

The bridge was rebuilt without the support structure in the middle of the stream. Eventually all of the little bridges over Black Bottom should be done this way as all 4 of them have structural damage. But our township is poor and they just patch things up for now.

As I drove Up from the valley, I recalled why I didn't take this road up. The road is very nice, very curvy and very pretty. But the left turn at the top of the ridge is a blind ... very blind turn.

I did stop and park to take these shots back down the road as they reminded me of that famous highway in Door County that everyone wants to travel to and take photos of.

Which begs the question. Why do so many people want to take the same shots of the same scenery? Why not find something new? 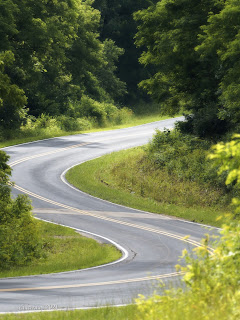 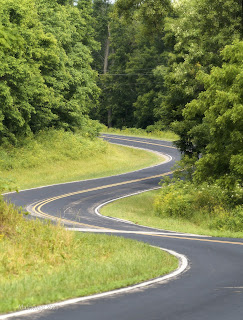 Since I almost never ever take a road shot, I thought this turned out pretty cool. Not Door County, just a back road in the steep hills of our county.

I woke up to Dense Fog the next morning. Fog so bad you cannot see the pasture in front of the house. There was a Dense Fog Warning on my phone/weather app.

Imagine my delight to wake up to a near white out and know that I did not have to travel to work 30 miles away this time in it.

I considered driving up the river road to explore but decided that since I could not see the 'Ru, it probably wasn't a good idea. So Charlie and I decided to take a walk.

I put the IRChrome filter on the modified camera. 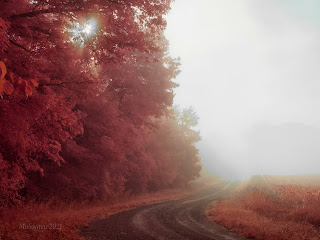 The intent was to get some coolo fog IR shots and some spider web photos. 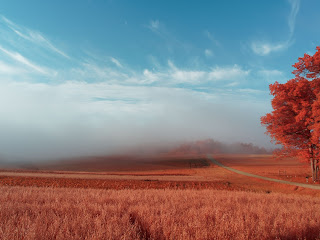 So I put the macro lens on the other camera and explored. 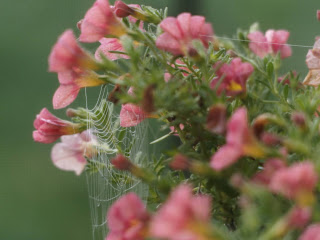 There is something unique and wonderful about seeing those gossamer threads that insects create. I try each year to also 'shoot' my neighbor's oat field when it is wet with dew. I have to get up there with that zoom lens and see how creative I can get. 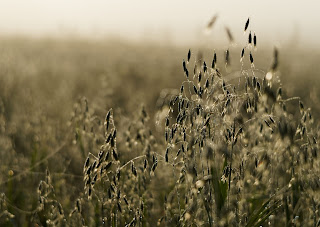 So.
Now it was time for bed. I'd worked out at CF, mowed yard, hacked and wacked weeds, and it was time for rest.
So of course I began thinking about the stars and the next new moon and the next full moon. So in my mind I began to plot how, when, where, I would try shooting it.
My mind would not SHUT up, so eventually I got dressed and hiked out to the ridge. 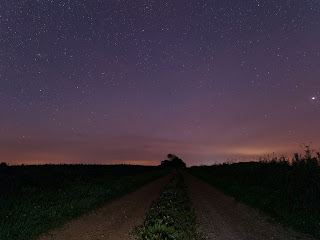 This is where I sometimes come for sunrises. I lit up the foreground with my cell phone as an experiment.
Nothing exciting here. Too much light and the moon would rise in a bit.
Could I try the classic self portrait of me staring up into the Milky Way with my headlamp? Um.
Imagine me sitting on a gravel road in the middle of nowhere just thinking and staring into the sky. The first few tries were epic fails. My light was not bright enough, too bright, or whatever. So I kept at it.
I looked like I was doing some sort of Pagan Ritual in one of the shots. I have to keep this in mind for Halloween. 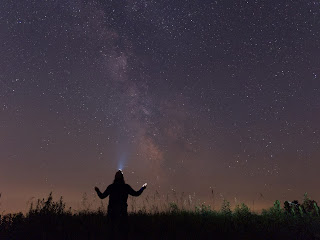 Eventually I got something I could live with.
Did I get the light right? Did the increase in humidity help? 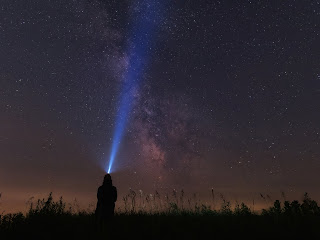 I don't know, but I loved it. [Yes...here I am trying the shot that so many others have created...the fun in it was figuring it out and the challenge will be to make it interesting and different than all the other photos like this.]
Then the orange/red partial moon started to rise and I wished for my zoom. Instead I just decided to be happy and listen to the coyotes and the night creatures while I shared my insomnia with them.
Posted by Val Ewing at 1:00 AM
Labels: backroads, curves, dark, Double JJ, fog exposures, infrared camera, insomnia, IRChrome, light, milky way, night shots, stars