It was so refreshing to get off the farm and do something fun after weeks of being stuck at home because of cold wicked weather. Bill and I headed out to the Wintergreen trail. Named for the pines that line the last portion of the trail on the bluff that was to be part of the Kickapoo Dam. It smells wonderfully fresh!

Charlie joined us and was our Scout. He seems to know he should follow the trail and to not get too far ahead of us. I'm guessing that all of my work and 'training' has paid off. [I use training loosely. I think Charlie has trained me.]

And yes he wears his beeper/vibrate collar on these hikes. When he piled out of the 'Ru he literally squealed and wiggled while he ran up to Bill. Bill patted him a bit and then it was all business. 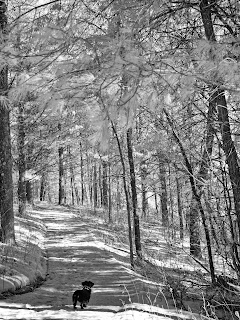 I took my newly converted Oly camera which is set up for all light spectrums. The conversion is called Full Spectrum, which allows me to add a filter for normal light and then different IR spectrums. I only brought the 665nm filter and the 25mm lens.
On a 3/4 camera that is the same as a 50mm prime. I like to challenge myself sometimes with limiting how I can shoot. This can make my more creative or be a huge exercise in frustration.
I'm so lucky to have a good pal hiker that puts up with me.
Shadows through a pine on the overlook bluff. Below is the river which was frozen over but melting. The ice was pitted, something we used to call Rotten Ice.
It is never a good idea to try and walk on river ice. 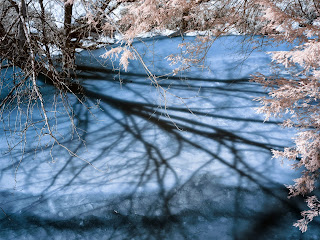 Bill, waiting patiently while I look around at the bluff. 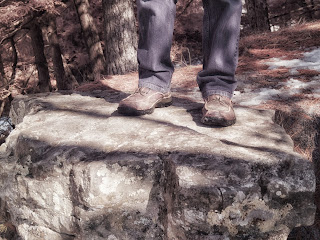 Bill wanted to see the Ice Falls and we headed there. I should have had my YakTraks with but I'd forgotten them.
Never the less, I slipped, slid, and made my way down the old equine trail to the bottom of the dry run.
This area never disappoints. I try to get there at least a few times during the winter to see where the water drips and freezes making the most beautiful Ice Falls I've ever seen.
2018
this was the end of March
Charlie was 8 weeks old and was
being held by friend of mine from Kenosha 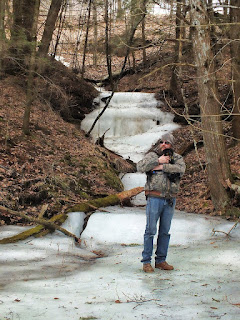 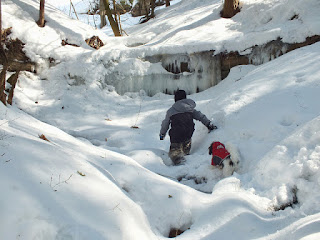 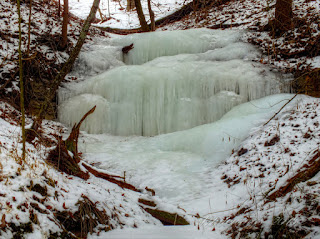 and then this year....
seen in Infrared 665nm spectrum 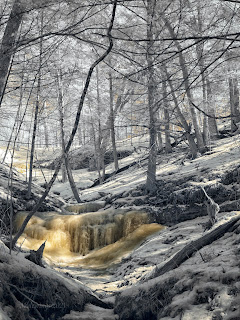 and without the 665nm filter 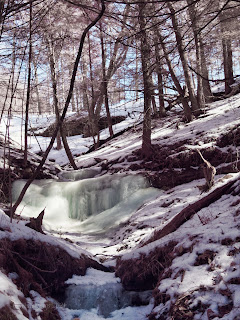 With the internal filter removed, the colors are a bit different. AND the exposure is a LOT different. Apparently more light can get to the sensor which would make this difference. This is what makes this modification better for some astrophotography...I think.
Near the end of the trail...
I never can get over the beauty of this section. 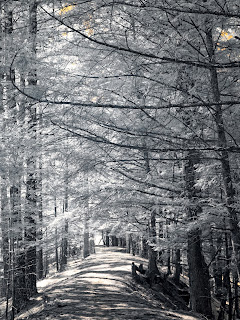 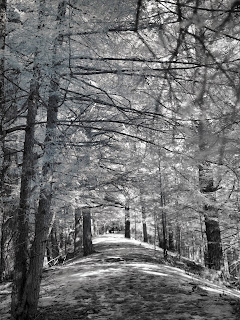 It generally leaves me breathless. When I come here alone, I generally spend quite a while on a log that acts as a perfect bench. 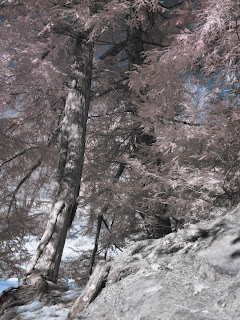 I can breath and just be silent if I wish to.
We made out way back to the buildings and walked down to the bench where we could just sit and look down on the river.
Mother Nature is a marvel. 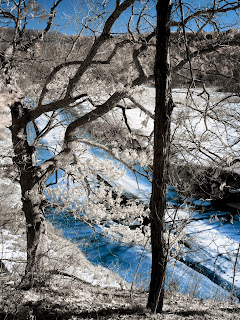