Well, that includes me right?

When I grew up I wanted to be that kid in the book My Side of the Mountain by Jean Craighead George. I read the book and I was going to run off far away. I would escape through my bedroom window at night and go live in....

I didn't have a mountain to live by. And even if I stole a loaf of bread I'd still have to go home because bread would only keep alive for a bit. But maybe if I got a huge coat and ran off, I could take 2 loaves of bread and walk to my Grandparents' house to live. At 8 years old I wasn't very good at planning so I just stayed home and awaited my chance to go spend the summer at the tiny cottage away from the Suburbs that I disliked so much.

My sister tried running away once and that didn't work well for her either. She ran away to the back side of the garage but didn't stay there. She said it was icky with spiders and 'stuff'.

I'm not saying that I had a bad childhood, I just thought that living in a tree or cave on my own would be nicer. No mom to yell at me and no sister to have to tolerate. My brother was an okay guy he had his own room which I always thought was terribly cool.

I can say that we had the coolest family trips. We all went. One of the most memorable ones was the trip out west and back. A road trip in a car that we slept in, ate out of. Not all of the time, there were motels and swimming pools. But I fondly recall trying to go to sleep in the front seat of that old '65 station wagon and staring in wonder at the stars above us through the windshield. 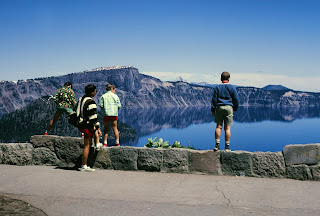 My father who is rarely ever in the photos as he was always taking them: 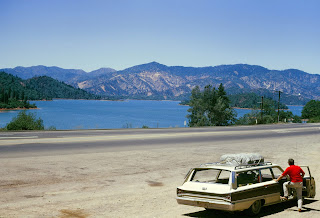 Arches National Monument. We camped out. My brother slept on the roof of the station wagon...I think. 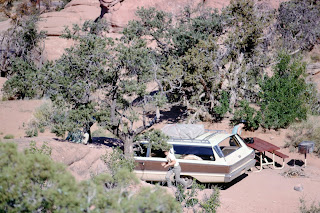 The coolest part of the trip for me was not Disney Land or California. It was landing in Shaniko, Oregon.
We ate a wonderful breakfast at a cool restaurant and outside we met THE Sheriff of Shaniko.
I mean we really thought he was the sheriff and the law. I mean look at all the badges he had!
[I'm the one the flowered jacket.] 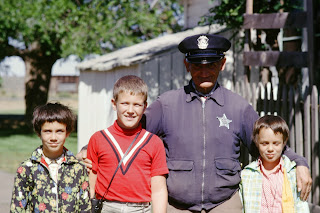 To say that I was thrilled was an understatement. 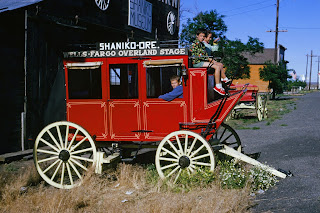 My father had a knack for finding out of the way places. And this place was a treasure.
Funny.
I looked it up and it is considered a ghost town. Below is the museum we had our photo taken in front of. 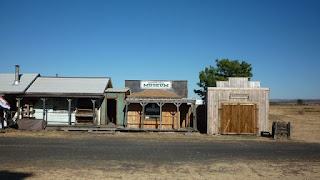 So we did see the mountains and I revised my idea of living on the side of a mountain.
The mountains didn't look that friendly. In fact, they looked very scary. 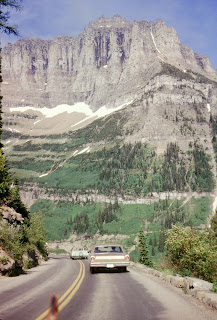 I can't find a photo of the Grand Tetons, but I recall my Dad proudly announcing that we were approaching them.
My brother looked up from what he was reading and asked Dad if he knew what Grand Tetons meant in French.
Dad did not.
My brother replied: Big Boobs
Amazing how my parents stayed on the road and did not crash the car. I guess I'll never think of the Grand Tetons in any other way.
It was a fascinating trip so full of adventure and surprises. Three weeks of travelling.
I loved our family vacations. 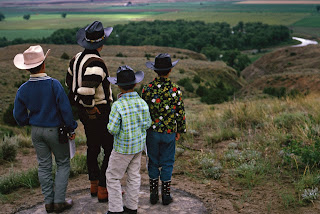 As for the Wild Thing?
Well, I could always pretend. 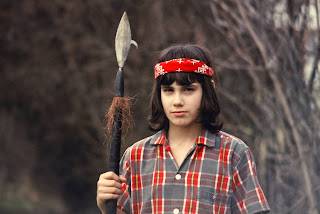 Posted by Val Ewing at 12:30 AM
Labels: 1965, crater lake, family time, shaniko oregon, the cross country trip, travel, trips, when I was a kid