Well Sunday morning started out rainy and muggly. That's Val Speak for Rainy and Humid.
That means it still felt like August and not like October at all.

So I decided to do some projects indoors instead of all the stuff I wanted to do outside. Fall does that to me.
I attacked some cobwebs, washed all the floors after sucking up Charlie hair [how can such a tiny dog leave so much hair behind???].

Then I finished one of my pressed leaves projects. I set the leaves into a large frame with some colored paper. 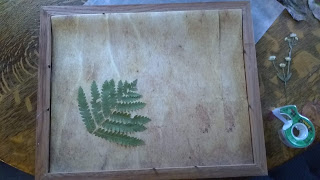 I don't have a photo of the finished part, but I'll get that soon. While the rain poured down outside, I went on to some other busy hand work so I wouldn't spend time messing around on my laptop. 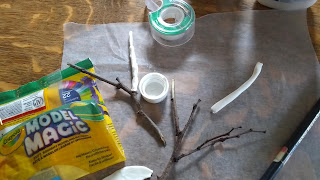 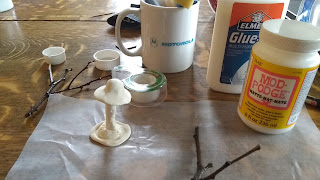 When I do get these items finished, I will take some shots of them. I'm making 'stuff'. I have an idea but it is just hiding in the 'creative' section of my brain.

The rain let up and it looked like it would be a nice afternoon, so I took Master Charlie for a stroll.
Uffdah! The new house on the ridge has added to the dog issue. The one dog that I sprayed pepper gel on the ground between us did NOT come out but walked slowly behind us.

The new house has two dogs. They came bounding across the field. I recognized the Blue Tick Aussie Cattle Dog. I'm not going into that story, but now I know who is moving into the new house. The owners of the two places that have bothersome dogs are all brothers from the same family. In the past 15 years three boys and their wives have made their dad's inherited cropland places to build their homes.

I had picked up Charlie. The Aussie and an old mutt walked around me. I just waited. I guess they decided I was not interesting. I walked on and let Charlie back down to walk on his own.

We walked on. Charlie had no interest in the other three dogs that were now sniffing butts and walking stiff legged around each other. Three dogs running together is not a good combination.

As we went further down the road I could hear the owners start to call their dogs.

I was not going to let dogs ruin our walk. 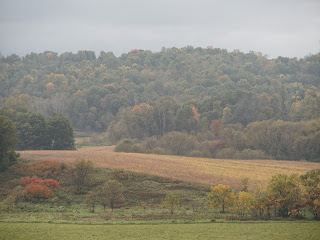 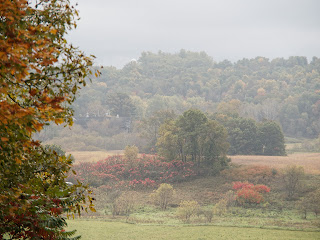 A light mist began to fall and in a way, I think it made this scene much prettier. It subdued the colors in a way, yet they still stood out.

My son got home from his long vacation to Vermont and the East Coast.

I have the urge to go see it myself. I went as far as to look up different ways of traveling to the area without driving.

Lastly, I set up the new laptop. Wow.

I did some quick graphic art work with Mandelbulb 3D and was amazed. 90 seconds to render the two following quick pieces. 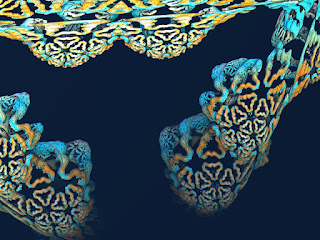 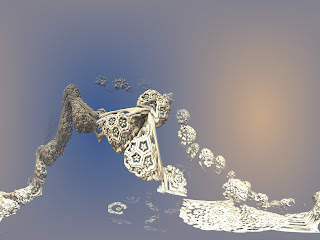 I didn't have time to dig deep into any formulas or lighting, but just messed around and had some fun.
Impressive speed over the aged laptop. These renders would have taken about 15 minutes a piece and not 90 seconds.

Looks like I can go back to messing with fractals!

All in all, a very quiet Sunday.

Today's chores are waiting. I have to also move the mules to their winter pasture and set things up before the cold weather hits.

Have a wonderful day.