My Subaru is 3 years old and not a lot of miles on it. Yet as we all know. Things can go wrong.

I gathered my list of items I had to get: Salt blocks, Tank Heater, Milk, Bread, Fruit, and so forth. On the way UP the drive the 'Ru acted like it was slippery which is strange with the new grippy tires.

I stopped to get the mail and as I walked around the front end it looked like exhaust curling up from under the hood. Huh. I grabbed the mail and put it in drive and pulled away. It felt like the 'Ru had the parking brake on, it spun its wheels and eased forward and then spun again.

Next came a wafting burning smell. I looked up at my Starlink blue button and decided this was a time to use it. According to what it is supposed to do, if I am needed help a real human will call me through my car??? and send help or roadside assistance. I mean I paid for it because I haul my hubby around to appointments and to have that comfort is a good thing.

I got through but had to turn off the ignition, the smoke was worse and I told that to the lady. The system shut down after a few seconds. So I turned the ignition on again and when Starlink talked to me I told them I would have to shut off the car as it was smoking.

"Give me your phone number so I can call you back. Shut off the vehicle and GET out. Are you in a safe place?"

I stepped out when she called me back and popped the hood. Indeed smoke was coming up from underneath and it was a nasty smell but as the car cooled, it stopped.

Where I backed up there was some nasty smelling green fluid dissipating in the rain. More. Hum.

She said she was searching for a tow vehicle. Was I okay, did I need Fire and Rescue? Yes to okay, no to Fire and Rescue. And the Starlink part? She knew exactly where I was. She said my car was at: and she gave my neighbor's address. Say what we will about new fangled crap on cars, but had I been stuck in some other remote place ... this would have comforted me. If I was a person in panic mode, I may not have been able to tell her my location.

I called the Dealership to tell them that my car was going to be towed in. I admit, I was flustered. I worked nearly 10 years in Security and we HAD to always have a back up vehicle. I did not now.

I got My Man Seth. Recall Seth? He and I did the round and round on the tire issue but all was resolved. I told him that my Subaru was going to be towed in. He suggested I get a ride to the dealership and get a loaner.

He was professional and kind.

I also spoke with the Subaru Roadside Assistance. They arranged for the tow. The tow should be there in 2 hrs. So I called my neighbor for a cuppa coffee and visited with her a bit.

All this occurred at 10AM. I started getting texts that 'they' were still trying to find a tow vehicle. Um. Shit. Whattt?

At noon I went back to the 'Ru and decided to just chill out. Seth told me to leave the key in the console and don't worry about it. Nah. Leave my newer car on the road with a known thief just up the road? Not happening. Besides I was blocking the mail boxes and boy would that piss OFF the mail carrier.

I called hubby and told him what was going on and he was fine with me sitting on the ridge waiting for the tow.

I started pacing in the light rain. Up and down the gravel road. So I stopped and looked at trees. I may as well occupy my mind. 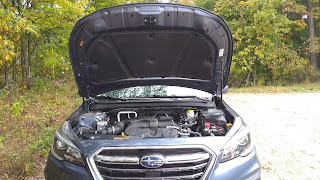 What was this bush I wonder? So I took a photo with my Smarty Phone and asked Google Lens to help me figure it out. Nah, Google Lens gave me a possible match of some shrub that grown in a 7 climate region. We are a 4.

So I wandered about my vehicle and the road staring at trees and shrubs in the mist. I saw the the ironwood tree also has catkins that stay on all winter. 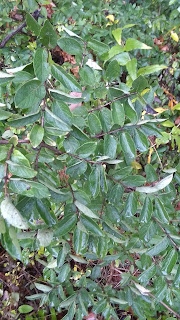 Well, that was a flop. So in between heavy rains I walked back and forth. I sort of felt like Pooh Bear. Tut tut, looks like rain.

At 2pm I called the Roadside Service and went through Hell's Menu to find a real person because the update said that my tow truck should have arrived. The real person was apologetic and said that the truck would arrive in 120 minutes to 150 minutes from...now....

At this point I could have gotten all nasty and snippy. I decided that there is enough of that in this world. The driver was coming from a long distance in crappy weather to help me. Delays? Those are something that is real in all aspects of our lives right now. 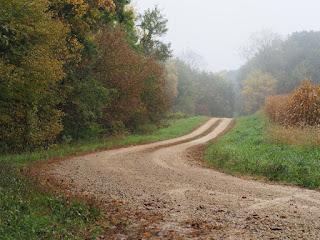 The postal lady pulled up. I apologized for my car being in the way and explained it was dead. She offered to jump start it or lend me her cell phone or help me in some way. How kind of her. I took the mail and put them in the boxes. She wished me a better day and went on.

I will never grip about that mail lady. She is not the one who refused to deliver mail a few years ago because there were chickens in the road. [Wow that is another story in itself]

I got a text from Starlink asking if I was okay. Had my car been picked up?

I can't say that I was really ticked or even bored. More annoyed that my faithful 'Ru had taken a crap on me. I kept trying to figure it out but I am no mechanic.

The view out my side window. 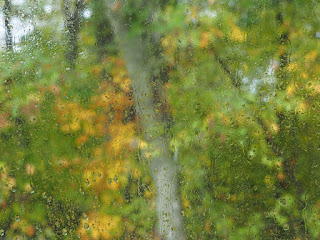 My good friends trying to help... 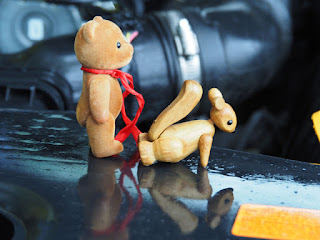 And yes, I take a small camera bag with me everywhere. 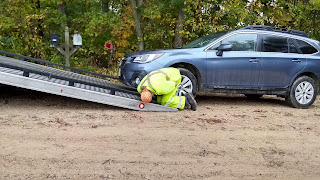 I thanked the driver, Craig, and decided that telling him I had been waiting for 5 hours wasn't going to do any good for anyone. I'd just sound like a whiney woman.

Starlink and Roadside Assistance texted me again to see if I was okay and had the car been picked up?

Well dang.
The wait? Meh, it was a long time. But it happened at near home and not on some obscure highway. I busied myself with imagining projects and watching the rain as well as inspecting bushes and trees.

I'd talked to Rich a few times and he was fine.
We had oatmeal for supper. I was in no way making a big dinner.

Today, Friday, I will get a ride to LaCrosse and be dropped off at the dealer. My Guy Seth said I could get a loaner. Good. I miss having my second beater car around to use in cases like this.

Anyway. The diagnosis will come today.

Aside from the frustrations and angst of not knowing what happened to the vehicle and having my planned day tossed way out of whack. I think I did well.

Everyone involved was kind to me. And that made my day bearable.

Maybe one last note. Starlink worked beautifully. I had my doubts about it when I renewed my subscription thinking I'd never need it. But it did what it was supposed to do and had I been in dire straits, Starlink would have sent me a Lyft or Uber to take me to a safe place. That lady actually seemed to be genuinely concerned for my safety. That counts for a LOT in my book.

Modern technology sucks sometimes, but in other ways? Awesome.