I was pretty excited to be able to hike with Aurora again. This time I'd get to meet THE Tank!
This was a view of fog along the river bottom on my drive to KVR. This spot is considered a small backwater for the Kickapoo River. The highway twists and turns along this river with multiple bridges to cross.
During floods most locals know which back roads to use to get around the low lying areas that have water across the highway. 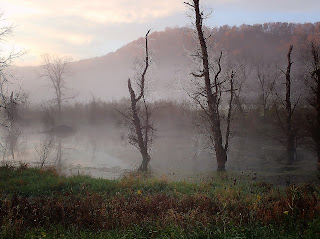 I brought my crappy little IR camera with me just for fun along with my pocket camera.
We hiked out of Willow Camp and headed down towards Old 131. I hadn't taken this particular route since last winter with Bill. It is a great hike to stay out of the winter winds. 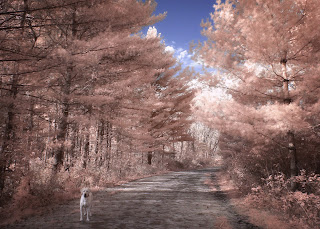 Tank [in infrared]!
One of the most entertaining labs I've ever encountered!
And yes, he adores sticks. To see him in person was so much fun.
Tank was Mr. Playful and seemed to carry a smile on his dog face no matter what the situation he is in. I hate to admit it, but he made me miss my days with my big dogs. I just wanted to get down and hug the heck out of him.

The best part was having two vehicles so we could park in one spot and hike to another spot without having to do loops. Here is a screen shot from an app on my 'stupid' phone called map my walk. It works pretty decently and for a free app, it isn't too bad. 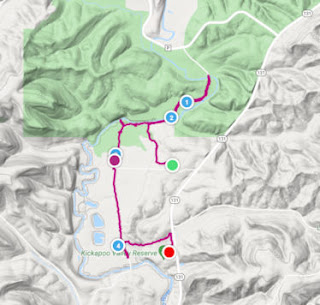 This is one of my favorite spots to stop and just take in.
This spot I call. The Ponds.
There are actually two sets of ponds. This is on the west side of the trail.
First shot is in Infrared,
second done with my pocket camera. 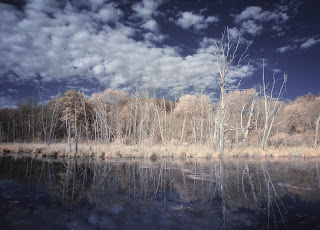 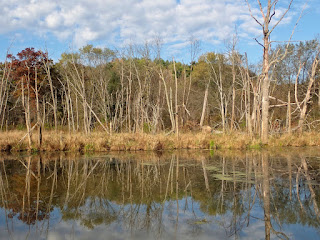 I tried so hard to get a good shot of the neat old oak on the edge of the pond, but it didn't really turn out very well.
Here is the Quiet Kickapoo. It is a very deceiving river. It is mostly very shallow and slow. Except where it isn't. Two years ago two women had to be 'water' rescued not far from here when they got tangled up in a log jam.
The Kickapoo will trick you. With a few inches of rain it can become a raging river that covers roads. The Reserve was supposed to be a site where they would build a dam to stop the river from flooding those places south. 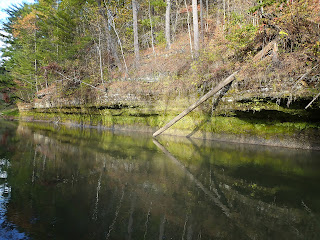 It never went through and we now have all these beautiful acres of land to explore. 50+ miles of trails to hike. I have two trails left to do before I've walked all of them.
Most all of KVR's trails are well maintained, not something that was done when I rode mules on it in the 1990's. Back then the land was a free for all with local kids and their 4 wheel Monster Trucks and winches. Parties were held down near old Campsite G with a rope off the bluff to swing out and drop into the river.
I recall the Rainbow People overtaking the place one year and riding through a camp of drunk, high, and naked people ... some of them covered in Kickapoo Mud.
KVR has an interesting history. 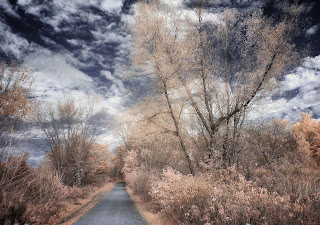 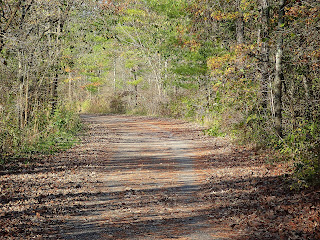 Now it is quite tame and well kept.
We saw some pheasant hunters. I had to chuckle. The one dog we saw was hugely fat and obviously still hunting with his master. Both master and dog were aged, but still out there.
I have no clue as how pheasant hunting even works. I had a coach at CrossFit who hunted with his lab/pheasant dog and he posted photos, but other than that? No clue.
KVR shares the land with hunters. In fact every county park allows hunting on its lands. It is a huge attraction for tourism and locals which is good for our local towns and B&B's.
Me? I used to hunt raccoon with hounds at night. I always thought that hunting the trickster at night was more fun. Those days are over of course. But I still pause if I hear a hound baying in October.
Whoops...that was way off track.
Our hike ended with about 4 miles of walking and looking around. We stopped at this last pond which is another one of my favorites because of the reflections it has to offer. 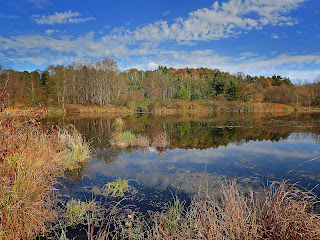 When it isn't wet [rarely], there is a trail that goes right around the edge of this pond. I was able to grab a few shots of Canada Geese nesting on one of those clumps of grass this spring.
Here is the same pond in the middle of summer but at sunrise with a lot of fog! 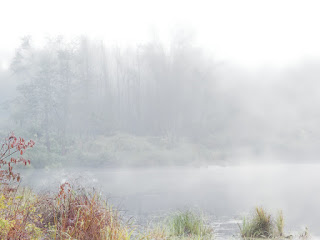 I guess I never will tire of visiting this place.
It changes its looks with the weather and seasons.
January 1st I get to map out my plan of getting all of the trails hiked and turn in my paperwork for the Trail Challenge.
I have only two trails left to explore that I haven't done before. So I think I'll be well prepared for the challenge.
It is always more fun when I can share it with someone else.
I hope we can do this together again.