I've always enjoyed the birds. My grandmother was one of those who could ID a bird by their song.
We'd be picking berries and she'd cock her head and say "Bluebird" and nonchalantly continue to pick.
I'd look around to spot what she'd heard and sometimes she'd point the bird out to me.

Grandma had a pet Robin. Nope, I am not kidding. She had found a robin fledgling and raised it successfully. The Robin would perch on her shoulder and hang out with her any time she was outside. Eventually the Robin flew off and we wondered if it would return in the Spring.

She called the Robin Hubert. 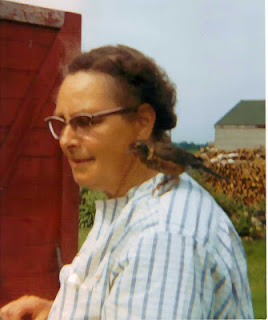 And Hubert did return the next year.
I thought my Grandmother Pearl was the most amazing person on earth. She knew so much Stuff. Now I am beginning to understand how she got to know stuff.
She observed. She also kept detailed notes every day on the weather, what birds she saw and anything else that Nature provided. She was a Naturalist, a Master One at that.
Over the past year or so, I've found myself becoming an Observer myself. I've had more time on my hands due to the Pandemic and being a Caregiver.
Last night found me outside late observing the Catbird. I think this is the first year that they have come to our yard or it is the first year that I've taken time to notice. 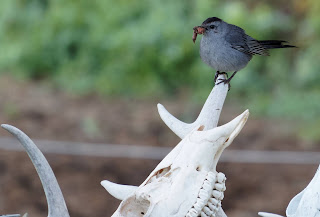 Her color is not something that makes you go Wow, but she is so interesting. She/he find grubs and arthropods in the yard. So I would say they are pretty helpful birds and good to have around. I enjoy 'her' calls and watching her.
Last night she followed me around the yard as I was checking on my shade garden. 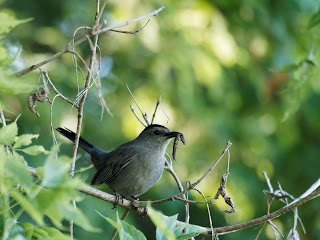 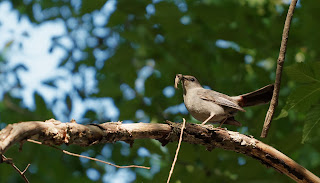 I am pretty sure that she wasn't actually following me, but looking for her fledglings to feed. And, it could have been a He as they both share the duties of caring for their young.
I've grown quite fond of the Catbird. I didn't know it was related to the Mockingbird and Thrasher families until I did some digging. My dad's favorite bird to listen to while he was living in Virginia was the Mockingbird. Try as I could, I never got a decent photo of one for him. We did enjoy standing on the Commons Trail and listening to their songs though.
I do enjoy Orioles and after the Dog Attack [previous post] Charlie and I spotted a nest along the road. I had to drive by there this morning to go get milk, so I parked and watched for the Oriole.
I stayed in the car and shot out the window so as not to disturb them too much.
Most of the shots were the common bird shot.
I was pleased to snatch a shot of the Oriole scolding me! 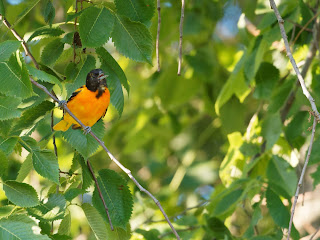 I'm still going to blame Aurora for directing my observation powers in a new direction this year.
The used lens is not super easy in dim light.
However, I did get the not quite full moon before the clouds obscured it. Handheld shot...so okay...
happy dance! 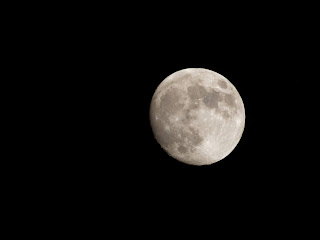 I think I'll take it out tonight for the rise of the Strawberry Moon?
I could not get this doe for the life of me... 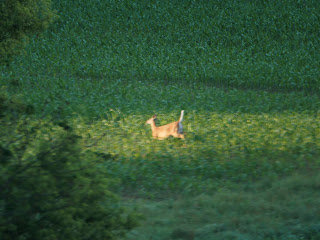 On my way back to the house I stopped to take a look at the milkweed on the corner of two roads... 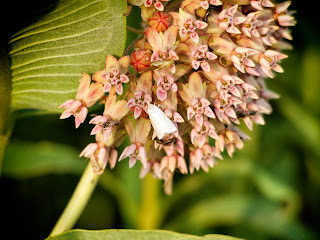 So. I can get a fair close up of insects with the lens, I can get a nice shot of the moon, but running deer at dawn? Nope.
Oh crap. IF you are still reading this I have one last observation to give up.
The bird that leaves BIG holes in trees. Here it is in action. 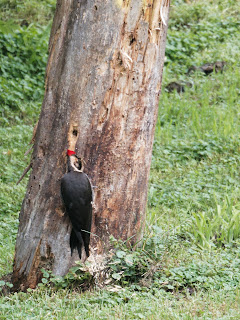