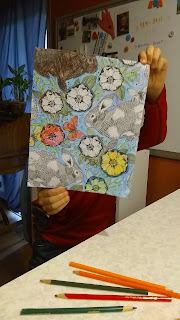 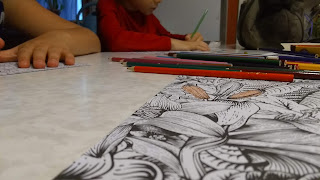 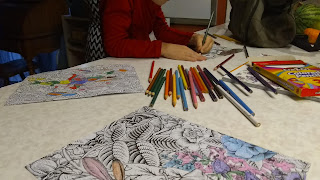 So my good friends/neighbors had an opportunity for a planned night of celebration out and an overnight in another city. Situations changed and the Grandma that was scheduled wasn't able to come and stay with the kids.
Lauren ran an idea past me and I jumped at the chance of hanging out with the kids. Their 12 yr old has been vaccinated and the other two have been following the standard Covid precautions. Lauren teaches children in Wuhan China English as a Second Language. To say that she has insight on Covid 19, is an understatement.
Okay. I will leave the Covid issue out of it from here on in.

The result was that I agreed to come up and spend the evening and sleep over while they were gone. Having a responsible adult around? A must in our minds. And besides, Rich goes to bed early and sleeps until about 8 or 9 anyway.
Lauren will be the one watching after Rich in a couple of weeks when I go see my son Eddie.
First thing Allie asked was 'Can we go buggin'? I jumped at the chance and we went up the road peering at different plants looking for crab spiders, moths, and various insects.
We didn't get far before the rains came. But we did find a few insects.
Not the best shots, but fun anyway. Always more fun with a sharp eyed youngster along.
The brown marmorated Stink Bug is below. I have no idea why it liked the bird poop. 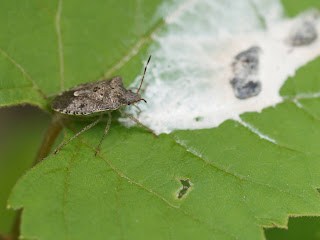 This was a Little Sulfur according to the common name. The scientific name is Eurema Lisa. I think that is a really cute name. It wouldn't stay still and moved a lot as the raindrops hit it. I tried to get its face which appears to be green with tiny black eyes?
It sure was a challenge. 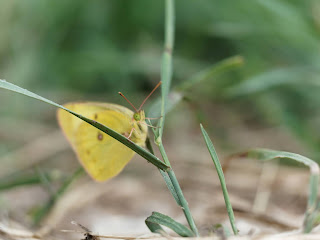 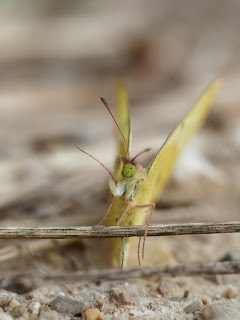 I can imagine it having something to say in the above photo.
I brought an adult coloring book that I'd found in my MIL's belongings and the two youngest kids sat down at the counter and we proceeded to chat and to color.
The Tween wasn't into that and politely excused himself to do other things in his room.
Eventually it stopped raining and the kids asked to go out to their playground and play. They showed me how to use Alexa to play music and I colored while they did their thing. It felt strange asking Alexa to play songs for me, eventually I just opened Pandora and let the music flow while I colored.
I viewed Allie's Bug/Insect collection and admired it. She really does love insects and hopes to become an entomologist.
The youngest treated me to some of his practice songs on his piano.
The pups needed more attention from me than the kids. I gave out many belly rubs and Stella was even kind enough to snooze with me on the couch.
About 4 am the storms rolled in and dumped inches of rain in a very short time. Thunder rolled and rumbled. Stella moved closer to me. My smart phone said that 4 to 6 inches was expected out of this downpour and to watch for water over the road.
I got up and finished coloring my picture and then as the storm subsided I went back to sleep with Stella.
By 8, all the kids were up and had something to eat. The oldest handed me some Kringle and said I should take some to Rich. I texted mom and dad to let them know things were all good and was it okay for me to go down the driveway?
I'd called and talked with Rich, he was fine. But I was dying for a cup of coffee.
The folks said I was good to go and they were on their way home.
Huh.
My big night out.
I really did have a good time!
Stella: 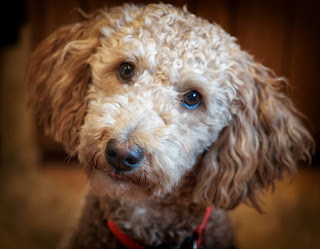 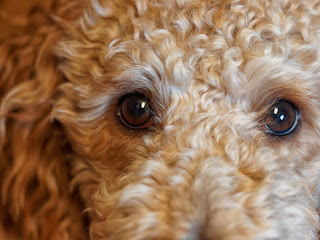 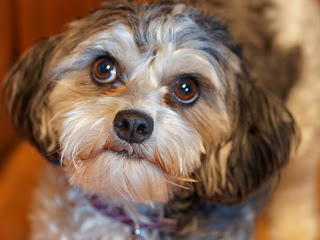 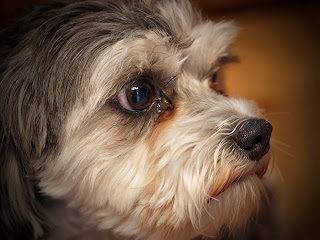 Total rainfall in our was 2 3/4. It rained lightly on and off the rest of the day which was exactly what we needed.
Posted by Val Ewing at 4:13 PM
Labels: Basil, coloring, fun with kids, good neighbors, night out, overnight, Stella, tween