"Hey I want to go with you on one of your morning hikes." Says my friend Bill.
I get up very early.
"How early?"
Old people early.
"Hah, I'm elderly, I get up to pee at 3:30. But I go back to bed and get up at 5 and 6 but go back to bed until CrossFit."
So what is Bill Early?
"What do you mean?"
I mean what time could you go realistically?
"I'll pick you up at 5?"
Text me when you start your pickup.
Truthfully, I would have gone earlier to 'catch' the predawn sky in my plans. But I thought I'd best not push it at all. Bill was an afternoon hiker but had recently discovered that mornings were best to beat the heat for doing outdoor stuff.
In the summer, I can't sleep past the first breath of predawn. I can't help it. I use that time to go check the fences, or walk on the ridge to watch the deer grazing in the cropland.
There is something pretty special about feeling like you have the world to yourself at that time of day.
It is almost an intrusion to have the rest of the world wake up too.
Bill is a neighbor and friend through CrossFit. He likes to complain that he is very old. He isn't. He is only 4 years older than I am. He is in his second year of retirement and true to form, he is busier now than pre retirement. He likes hiking as a form of relaxing exercise, but also has decided that he needs to get to know the area he has lived in for so many years but never had the time for.
I wanted to show him the beauty of early morning. The slanted light, the magic between dawn and day.
And... my husband feels more comfortable if I have someone going with me on my crazy excursions.
Of course I was awake at 3:30. I pondered which place I should take my friend.
So I decided to 'shoot' the Milkway since it was presenting itself right outside my porch.
That way I could be useful and ponder at the same time. 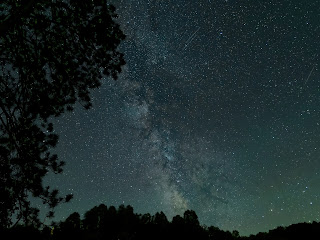 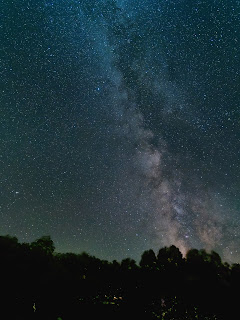 The lights in the lower half of the photo above mark my neighbor's solar lights on the dog fence and the streaks belong to the fireflies.
The whole purpose of the morning hike was to get Bill excited enough to go with me to shoot the Milkyway or the stars above the ponds at KVR. Or to just watch a full moon set/sunrise down by the water.
That thought was two fold. While at the ponds, we could hopefully catch a glimpse of the Trumpeter Swans or other cool birds in the early morning.
Text: 4 minutes.
Text: Okay, I'll be here.
At 5, Bill picked me up. [First time in a vehicle with anyone outside my family.]
We parked as the sun was just coming over the horizon. It filtered through the wooded trail as we hiked up towards the rock outcropping. This short trail is all uphill and I can usually march up it quickly. No way was I going to make this uncomfortable for him. I matched his pace and listened to him breath.
"This is beautiful!" He kept exclaiming. The morning light was indeed enchanting as we walked right the light filtered through the heavy canopied woods. 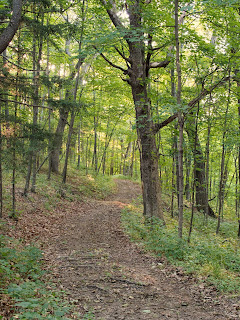 I led him through the narrow trail up to the rock. To my horror I saw that the poison ivy had really done very well in the drought.
I asked Bill if he knew what poison ivy looked like. He didn't. So I helped negotiate the trail the rest of the way to keep his bare legs from rubbing the leaves of Three.
We'd missed the brilliant colors of dawn over the valley ....but.... 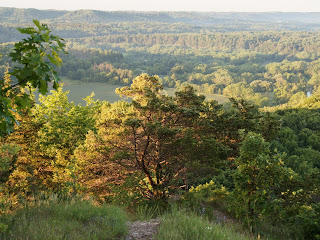 The first view was enough for Bill to softly exclaim.
Wow.
wow...wow.... 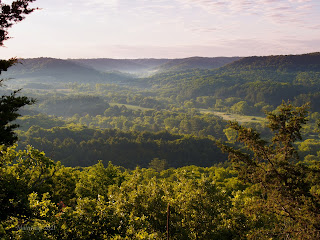 We spent about 20 minutes on top looking at the light, the forest, the mist, and the view. 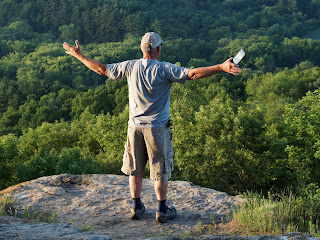 And as promised, I had us back on the road in time for him to get home, take a short snooze and make his 9 am CrossFit class.
He was animated on the drive and asked if we could do this again.
I let my idea of a full moon set and sunrise combo percolate with him a bit.
Next time I get smarter and bring coffee with me. I missed having coffee on the rock.
Posted by Val Ewing at 6:50 AM
Labels: after sunrise, BH Rock, daybreak, early, fun, hiking with Bill, KVR, morning