This was one of those amazing sunsets that just goes on and on and on.
There is something beautiful about just watching amazing colors to start or end a day. 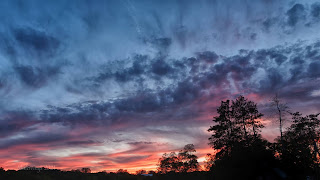 I know I once said that I didn't use tons of extra planning and preparing for taking photos. I was an off the cuff type of person.
However, just lately with the partial lunar eclipse a bit ago and then with the upcoming June 10th partial solar eclipse, I started to do some serious homework! 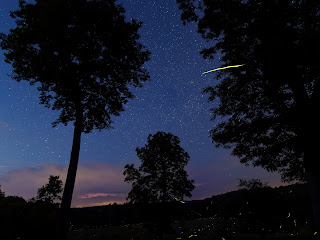 One bit of that homework was to learn how to use the camera I have to the best of its abilities. I have a decent lens for night work and I figured out how to get the stars in focus with both 'Focus Assist' and the Starry Sky feature on my M5. 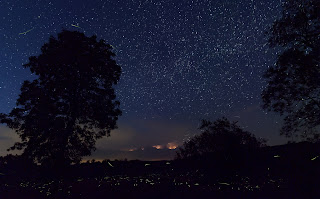 I intended to go out to the pasture to do some practicing and I if nothing else 'shoot' some lightening bugs.
The photos above are a bit dark [duh, it is night!], but if you click on them I think you can see them larger and with a bit more detail.
I realized there was a storm cell off to the east and the lightening bugs were everywhere. So I decided to try something a bit wild.
My first try was a mistake. I must have bumped the camera or tripod while it was shooting its LiveComp. 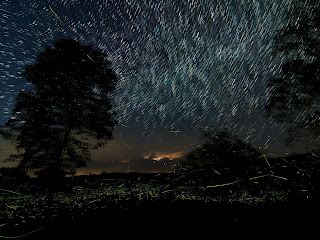 I wanted to show the mistake. Did I touch the camera? I don't recall, but the effect was certainly dizzing!
So I decided to 'do' it over and I hoped that the storm would still do its magic.
The first one is a 15 minute star trail. It's okay, but dang soo much is going on! 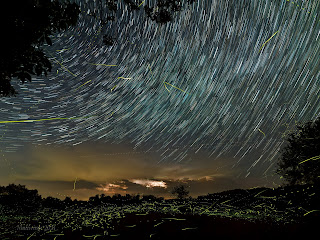 So I tried another and then just shut it down after about 7 or 8 minutes and I liked it much better. Odd how two shots of nearly the same area just minutes from each other are differently colored. I think there was more lightening going on with this second shot. 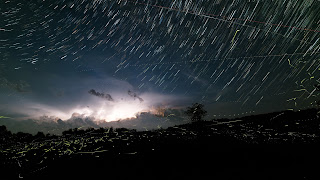 So what was the whole point?
I guess practice. 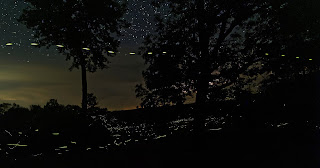 So that was the practice part. Scouting and planning for trying to photograph the partial solar eclipse was the next step.
So I leave you with a pretty photo I shot of a Swallow Tail I tried to chase in my flowers. It looks like the verbena is a huge attractor! 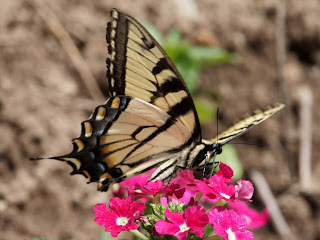 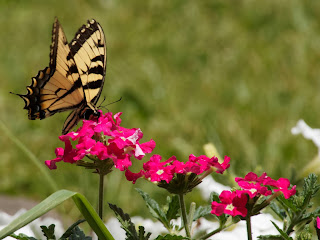