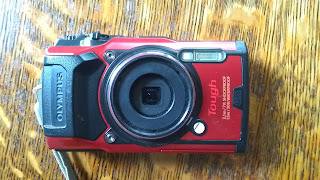 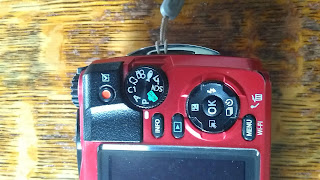 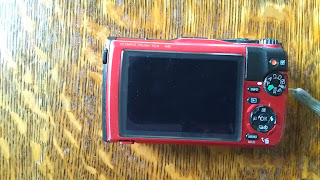 This dandy camera arrived December 14th 2019 and it was love at first unpacking. First off, it is heavy duty and weather proof. It's name says Tough and it is. I've dropped it from my mules, dropped it in the snow, fumbled it in and out of my coveralls and jackets, and walked with it in downpours and snowfalls.

I've worn the paint off one of the edges and basically I've been surprised by it.
It is not a DSLR camera but I've even put it up against my those cameras in some still life tests. The zoom is not something I use often but I do use the macro features A LOT.

The Olympus Menu has always been a confusing thing on cameras and this one is no different. The macro feature menu allows me to do macro, in camera stacked photos [I think this feature is the coolest. I normally can do it without a mini tripod!] With a tripod, you can also take frames to stack later in a program like Helicon Focus.

There is a microscopic feature that is the bomb. They call it Microscope instead of Macro. 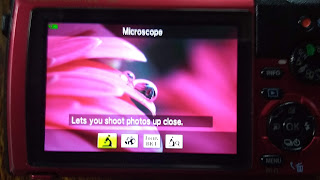 This is the mode for the following shot I took yesterday while hiking in the rain of raindrops on a dandelion. 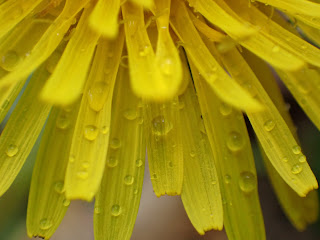 In camera focus stacking. Wow.
Super cool Olympus feature, but this one comes in a little pocket camera.
The Olympus OMD EM 5 Mark III has it too but it only works with certain lenses. 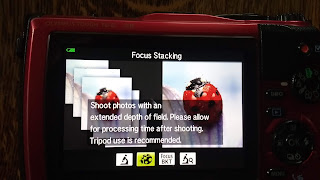 And it works pretty well. 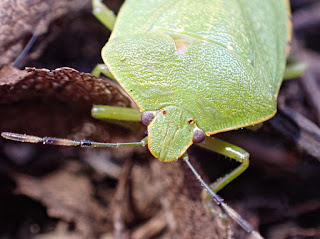 This feature called Focus Bracket takes several photos and lets the photographer stack them in post process. This is fine and you would want to use a mini tripod.
I rarely do this only because I think the hand held Focus stack works well for me. 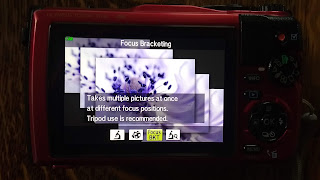 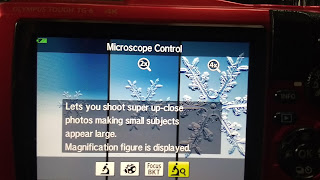 Check it out. I ended up getting a ring light that attaches to the front of the camera. It works pretty neat also.
Super Duper Close!
Snow flake 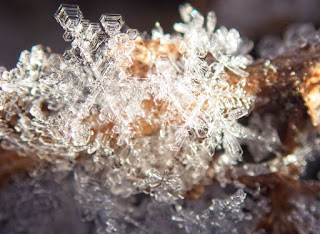 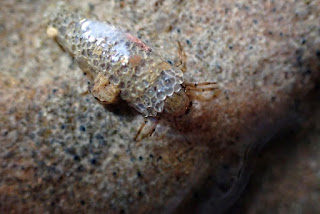 I stuck the camera in Landscape mode and took this shot of the little gargoyle in my Forest Garden.
Easy peasy. No thinking, just point and shoot. 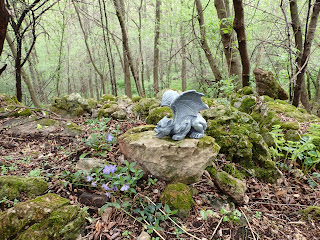 Other handy menu items are sunset and indoors. For great sunsets, I am not impressed with this camera. It lacks a bit of pizzaz in picking up the colors, but if that is all a person has, it does great.
However it does take pretty cool video in slo...motion! It does eat up the battery if you do a lot of video. There is a self portrait mode too which actually works pretty nice.
Does it produce the best photos compared to other cameras? I honestly don't know. I don't Pixel Peep and I don't care. I need a camera that will take abuse from me and is handy to attach to my belt. 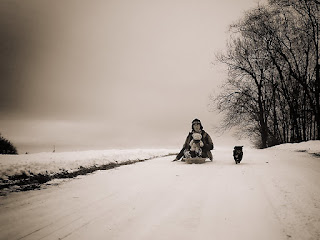 It also has a cool feature which I used. It has a timer you can set and then ask the camera to delay the first photo and take a series of shots. That is how I got most of my 'snowy' adventure photos this year.
Last note. On the dial menu there is C1 and C2. I've never used them. But if there is a particular 'way' you like your camera set up, you can preset your desires and set them to C1 or C2.
Posted by Val Ewing at 5:17 PM
Labels: i like macro, little red camera, micro, my affair with Olympus, Olympus cameras, Olympus Tough TG6