The weather statement had called for heavy dense fog in the early morning on Sunday and Monday.

I love morning fog now that I don't have to drive through 30 miles of ridges and valleys in dense fog on twisted roads that some demented twit dreamed up. Actually, the roads are old established roads and are notorious for being steep, twisted, and difficult. 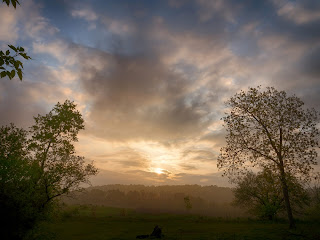 I wanted to experiment with fog and longer exposures. What I did find ~ and it makes perfect sense now that I think about it ~ that a longer exposure like the one below ~ gave me a 'star' effect on the sunlight coming through the leaves!

Was it the combination of the 100% humidity and the light plus the 1/4 second of exposure? Well, I guess. I'm still learning about this thing called photography. If you want to see a large version, click on the photo. I didn't 'see' it until I got back home and brought it up on my laptop. 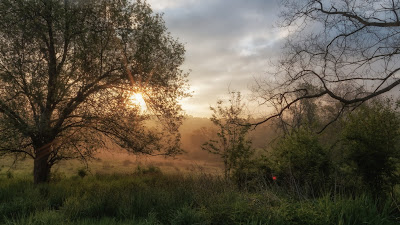 I experimented with a 15 second exposure in the meadow to see if I could get more of the fog that was slowly wafting through.

It sort of worked. The fog/mist can be seen moving past the branches in this shot. Nothing to get excited about except that I now know that I can set up for a foggy shot in the woods if the conditions are right to get that eerie feeling. I've just never tried it before. 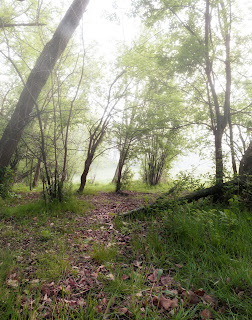 The fog lifted and the air cleared. 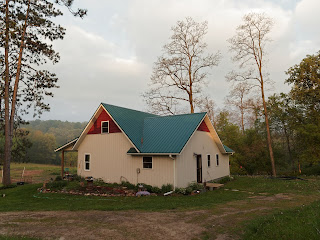 Monday morning was even foggier! What a delight. I just grabbed the Infrared camera and headed out to wander around.
At the fence line to the east and across the meadow. 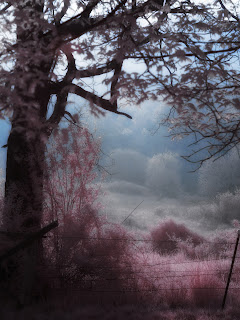 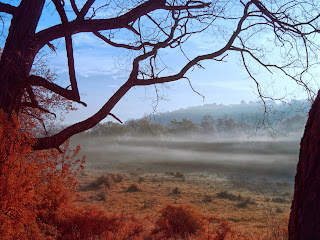 Lil' Richard through the window while I was grabbing some coffee... 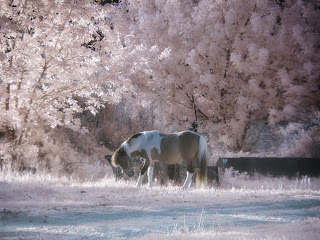 Sundance in the area I have been working on for the past few years to clear of burdock and brush. 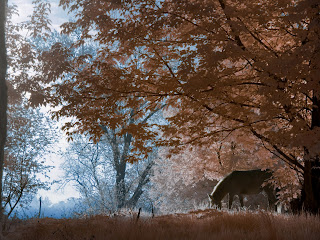 The Greeter in my Forest Garden. 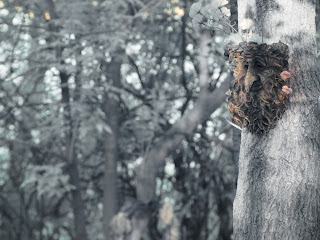 Rain now...
We have beautiful rain.