It is IR Season

So many photographers that experiment with Infrared Photography literally put their cameras away once late fall arrives.
One of the reasons I've become fascinated with it, is because it is sometimes very difficult. Many times the shots turn out like crap.
I do try to find shots I can take in the winter when there is no foliage to reflect the classic white leaves and grass. But IR is so much more than that.
There are certain elements that really make IR pop and other elements that simply make IR nothing but a HUGE dud.
Here is a winter shot of Weister Creek in infrared with the elements that work in my opinion.
Water
Sky
Clouds [oops, no clouds! Just bright skies!]
Sunlight
Water
Ice
Reflections
Green Pines
I tried this very same shot with my regular camera and it didn't impress me at all.
Shot with a Canon ELPH 180 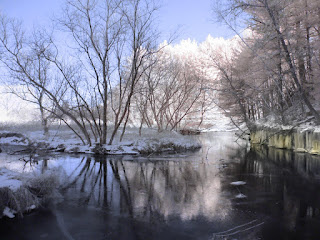 Other winter photos can be found here: In all things of nature
Now I have to laugh because the standard rule for interesting IR photography is those things I mentioned. Water, sky, clouds, leaves. None of those were in that winter walk. It was overcast, cold, with a gunmetal sky at times. I used my pocket camera that I stuffed inside my winter coat to keep it from freezing.
I read an article by PetaPixel I think in which the photographer they interviewed said that 90 percent of his photos were tossed when he used IR. He didn't shoot unless it was summer, he didn't shoot unless he had sun, clouds, water, and sometimes a building. He went for reflections in the water too.
Let's note here that this fella was a pro. He sold his photos.
Me? I'm not a pro and don't want to be. I just want to experiment and explore.
A shot from my adventure last week...shot from the Beaver Dam. 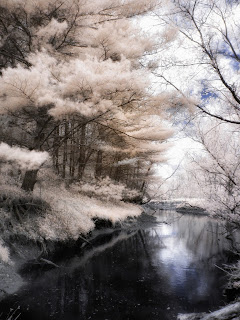 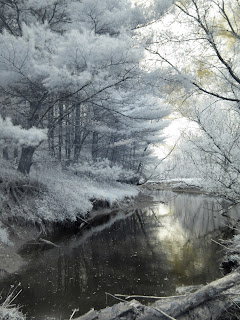 When the clouds moved in  and I tried other shots, they just ended up being total duds.
I just reviewed them and tossed them. Nothing here folks!
Here is one I would have tossed, but I just had to mess with it a bit. 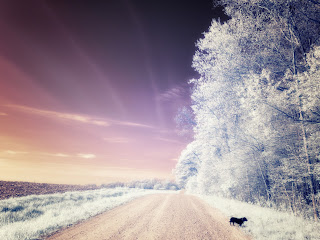 It was the sky that fascinated me. Without the IR filter, the clouds were nearly invisible. The nice thing about IR is that no one expects certain things to be a certain color.
Just some fun here while I was checking fences. Fence line above the creek in the Wooded Pasture. Yep, I did a channel swap and played a bit. Pink leaves and Turquoise sky? 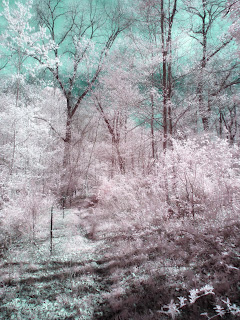 Then there are those moments in which elements present themselves and you just have to go for it. 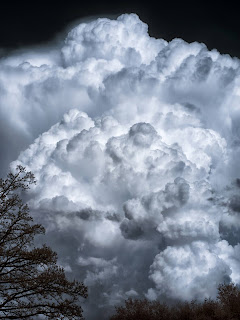 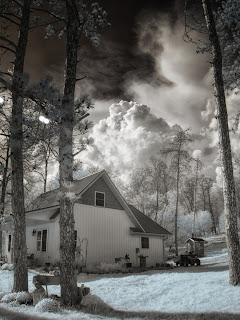 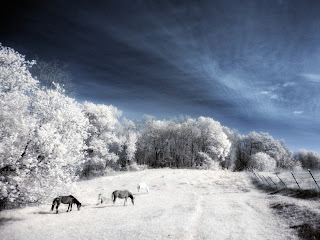 I'll keep experimenting because that is so much fun.
Time to get back to work. I hear the critters calling my name.
Posted by Val Ewing at 6:33 AM
Labels: clouds, colors, grass, Infrared Photography, IR Season, just for fun, leaves, sky, water, Weister Creek