My wild red heads. That is Sunshine in the front, she is 23 years old and some days acts like her young sister behind her. They are always ready for some fun. Which in Mule Terms means Bucking and Farting. 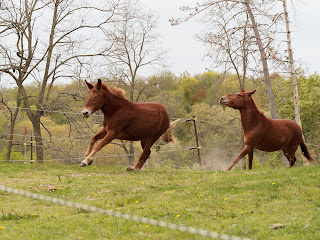 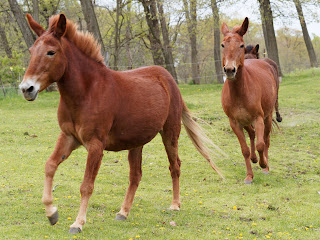 It was time to move them to the Forest/Meadow pasture. Without our regular rainfall, our pastures have really not recovered well. But the grass is always greener on the other side of the fence, right?

I have a rotation that generally works fairly well. Mules love the grass. The photo below is where I concentrated an area for them to graze as they usually pass by this section and it gets tall and uneaten. 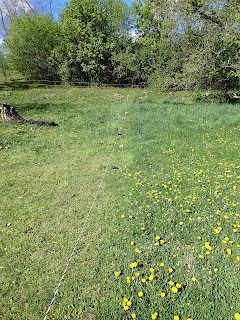 Turning them out to the forest means they have a meadow but will have to forage in the woods for more grass and nibble on briers which they will do. Often they are lazy and don't bother with the woods.

So far so good. They have all been put back together. Old Fred looks a bit rough but he is happy he is grazing with his girls. I have a lot of grooming to do to everyone who are shedding like crazy. The horse is just about shed out already. Mules generally start to shine around the first of June. Must be the donkey in them! 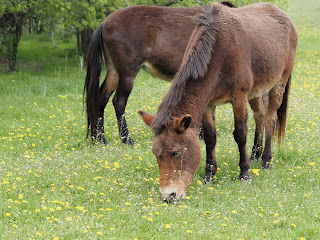 Sundance inspects an inner fence. She is looking into the Buckthorn Woods. Grass grows in there and I have some Burdock to clean up before they can enjoy that area. 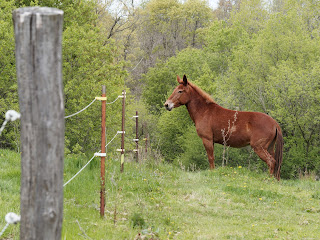 After 24 hours the little mule herd seemed to be at peace. They are back to being one unit.

I decided to take a nice long wander about in PeeWee's. Rich wanted me to hunt morels and it was a good enough excuse to pack snacks and water in my little backpack and take off. It was Mother's Day and that meant I got to choose what I wanted to do ... sort of.

I walked the south hillside of the first valley and found an old cow trail to follow. Weirdly enough I noted that someone had walked along the same route and marked some trees. Curious, I followed the trail to the fenceline and then headed up the steep hill we once called Mule Killer Hill. There was a steep and long hill that would take the piss and vinegar out of our young mules.

I followed a narrow deer trail near the top. 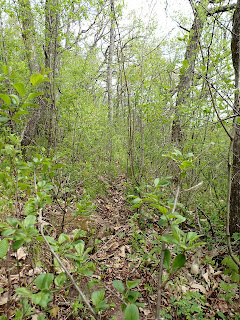 I started thinking about the fact I hadn't seen or heard of the 4 wheelers in weeks. Then I thought about how much easier it would be getting around while riding Sunshine. 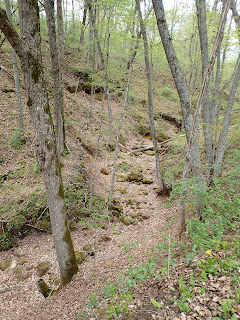 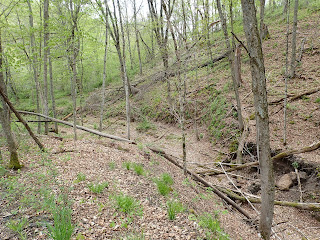 I finally decided I'd had enough 'hunting' around. The only fungi I found was near the creek and those were pheasant backs.

I toured the side of the hill and crossed the fence onto our land. Something caught my eye and I stood still.

I only had my little red camera hanging from my side. 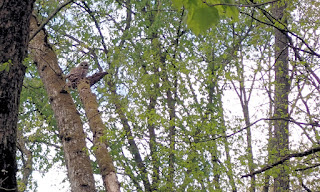 The owl wasn't interested in me. But I watched it. I took pictures. It never turned its head to look at me until I made a kissing noise. Then it gave me the once over and continued to chirp.
I left the owl to its business and headed home.
Back in the woods I heard:
Who...who who...who cooks for you!