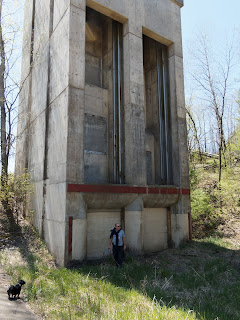 The photo above is the very infamous Dam Tower. Bill was marveling at its construction and how out of place it looked. There is a lot of great history and some NOT so great history of how this reserve came to be.

Local historian Brad Steinmetz has written a book on it. He also updates his blog about LaFarge once in a while. I find it interesting because I know the area fairly intimately now that I've lived here for nearly 30 years. I married a local so that affords me 'local' person status.

The Dam that Never Was is pictured here in a photo around 1975 when the dam project was stopped. 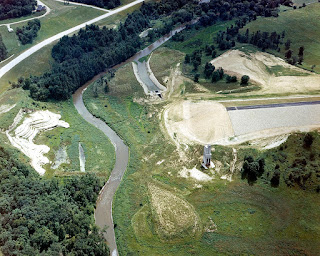 There is no photo of what it looks like now. But the dam tower is where Bill was standing. We are so happy the reserve exists. And on the other hand we keep in mind the heartache of those who lost their homes and farms to eminent domain so many years ago. The dam tower stands as a reminder of this controversy that still exists today.

We looped around the ponds close to the visitor center. Bill had never hiked these trails yet. We were able to see some Sandhill Cranes. 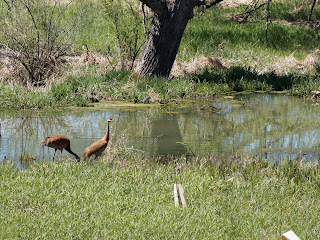 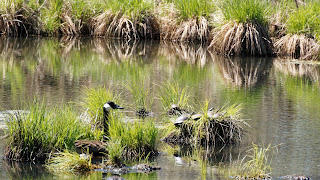 We really enjoyed the casual walk along the river bottom. It was warm yet because it is so dry here now, there were no bugs! Charlie had a tough time with the heat and the tall grass. He did ask for a 'lift' and I obliged.

We took a rest at covered bridge #18 and ate apples which we both shared chunks with Charlie. He is foodie dog. He will eat whatever a human eats that includes lettuce and tomatoes! 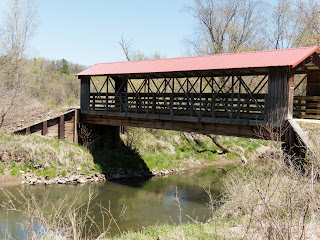 We found blood roots and a variety of wildflowers growing in the shadier areas.

When I got home Rich asked me if I'd go out and look for Morel mushrooms. There probably wouldn't be any, it is early and it is very dry. Dry enough to have a Red Flag Warning for Saturday.

However, who am I to turn down a chance to muck around in the forest? I put my macro lens on my camera and filled a water bottle. The best things in life are being able to wander about the creek and the land without any chore that needs doing.

No watch...
and I left my cell phone at home.

I really didn't want to be checking the time anyway.
Within ten feet on either side of the creek, things are bright green from the moisture in the air. Away from the creek the forest looks pretty dry and the dominant color is still brownish.

Ferns are beginning to uncurl and seek sunlight using the moisture trapped under the heavy layers of dead leaves that cover the soil.

At least there is that.

On the ridges and fields dust devils are whirling about.

But on the rocks in the creek I found some moss preparing to spread its spores. 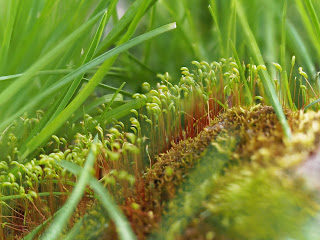 I found Bishop's Caps but no Morels. 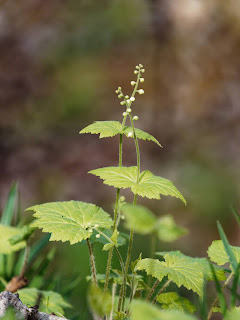 Near the top of the ridge the wild strawberries were blossoming. 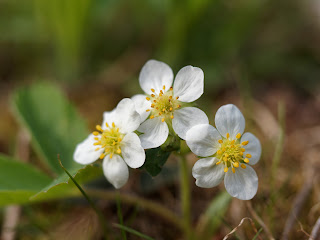 In the summer pasture I found so many things going on with insects. I waited forever for this ant to pull up his/her head but it was so busy collecting pollen! 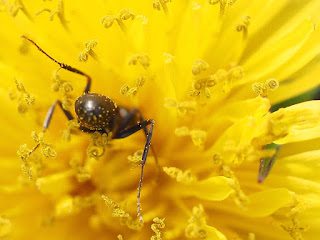 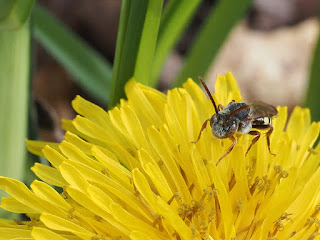 And a side view of this little creature. 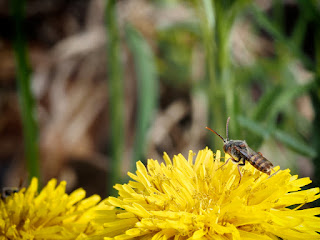 I never paid much attention to insects until the last few years when I decided that it would be a fun challenge to photograph them. I have been inspired by some incredible work I've seen others do.
There it is.
Being curious again.
I liked wandering. I found nothing but neat little things.