.... well, you know the sayings! I will let you complete your own sentences.

Here's Fred staring at the porch door as I got put my boots on Friday morning.

They look cold, but aren't. I free feed hay and they have heated water along with cozy woods. 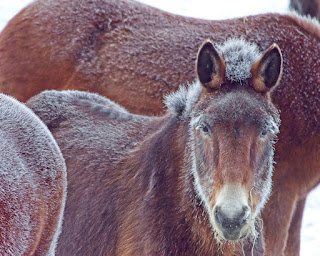 By the way. Fred is 37 according to our records. He seems to be doing much better this year than he was last year. Fiesty as all get out. He bosses the bigger ones around. Other times he goes off by himself and plays the Grumpy Ol' Mule and sleeps next to the huge oak tree.

By 9 AM my co-hikers begged off from going to the ice caves. I don't blame them, one of the kids was missing his boots.

I was restless as this was a planned day. So I waited a bit for the sun to come up a bit higher.
Then I was on my way to do exploring.

I am known as the NUT who loves winter. And I am a Winter Geek.

I'm going to include a photo from a gazillion years ago of my father on a night he prepared to go cross country skiing. He was ALL in on winter. Imagine this, when I visited him we could ski at night for miles and miles. Our conversations were about weather, skiing, techniques, and nature. 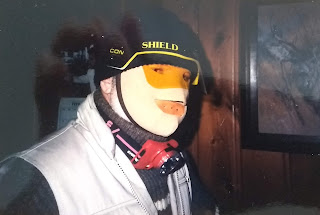 Dang! He looks like an original Horror Film Slasher!

He studied cold weather and how to dress for it. Imagine how he would be amazed at how cold weather clothing has improved since the 1980's!

I was not the only nut out there. One older lady was skiing and there was an old gent skate skiing. His movements were rather fluid and it was a pleasure to watch him glide by. 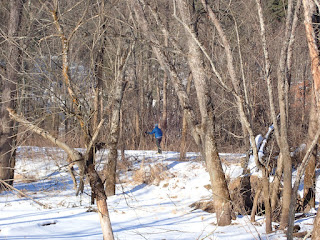 I decided to do some off trail sight seeing. I knew I'd walk into the wind for about 1/2 mile but then I'd go into an area that was protected by woods and bluffs. 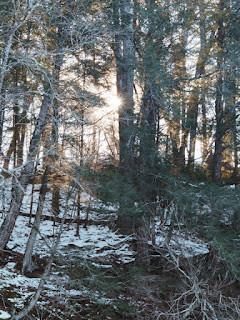 The river seemed frozen over, but I won't walk on it. I know how deep and swift it is near the bluff. 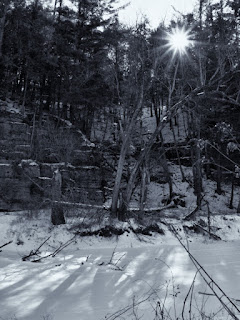 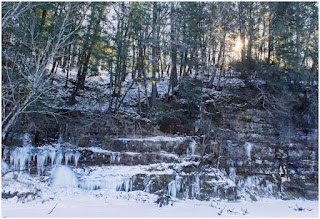 Getting the shots right were really hard and I am pretty sure I didn't do it justice.  I was shooting towards sunlight and dark rocks.

My hands got cold. I'd put my mittens back on over my knit gloves. I did more walking and admiring more than anything else.

Bear suggested we move into the sunlight. Bear is usually right about things. 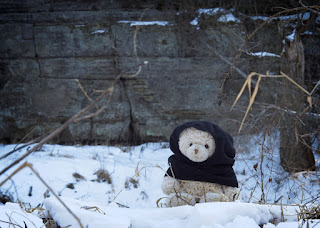 I cut through the frozen backwater pond towards the trail and the sunlight.

The sun was very welcome.

Bear and I walked alongside the trail with the wind at our backs. The sun filled us with warmth. I crunched along and thought how fun this trail would have been to ski with my father.

Bear agreed with me. I like Bear, he is a pleasant but stuffy fellow. He reminds me that life should be enjoyed and no matter what, a person doesn't have to be lonely if they have a friend like him. 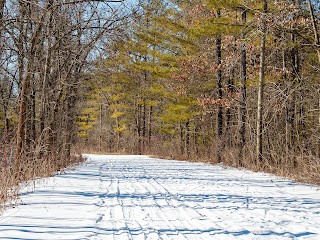 It was cold but it was refreshing too. 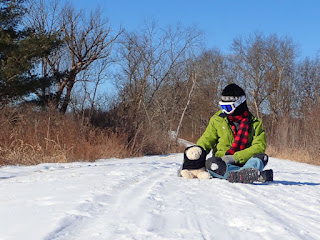 Bear is a good partner. He never complains about anything.
Not even my driving. 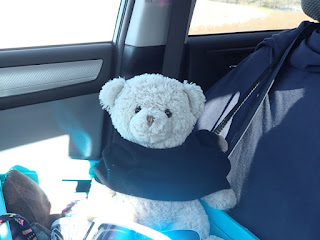