So.
Basically the doc said I should be okay unless something more happens. In simple terms my older eye had stuff that is pulling on the retina. It caused the flashes of light and the weird things.
Take it easy, don't be lifting a lot of weight. I'm not sure he understood that 15 to 50 lbs is not much weight to me, but for now I'm going with it. I will behave myself and put myself on 'light duty' for now.
I was told it is okay to hike but be reasonable. Pfft.

The Fixer. Well, that's me.

Hubby couldn't get the skid steer started after he charged up the battery.

The man is a whiz with a skid steer and we've had a few of them over the years. This last one is his pride and joy. He came in the house frustrated and out of breath. He dropped on the couch and proclaimed that he was good for nothing.

I made a couple of phone calls. One to the guy who was fixing the mower. It will be delivered tonight or tomorrow night.
I called St. Joseph Equipment Company and they had a guy in the area.

I swear, if IT has an engine, I cannot fix it. Give me a dog, a horse, a mule, or even a donkey and I can get them to do most anything for me. Anything that uses gas? They are mysteries.

The electronics wouldn't work because the battery had died and the switches all shut off and needed resetting and a relay went bad. It took the tech guy about an hour to figure it all out and he was super nice [I'm sure the bill will be nice also].

I gave Rich the news and he beamed, he can't wait to get out and grade the driveway. I worked out a plan with Stan the Tech to get Rich out at least every two weeks to keep the 'steer' running. Stan also laughed and offered to take our machine to his house and bring it back when we needed it. He could keep it busy!

And before Rich got ill, our skid steer was always busy.
Like clearing brush and going into places to get stuck..... 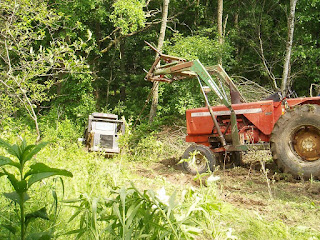 Or digging out an Oak stump that we were told couldn't be dug out. Um, yeah, he stuck it good and we used a truck and a tractor to get it out of the hole, but by golly he did move the stump out!

Back in the day, Rich would often get a supervisor to ride along for easy work. Morris loved riding in the skid steer with Rich. 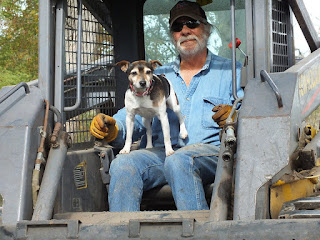 One year we used it to transport a Dexter Cow into the shed when she was injured. 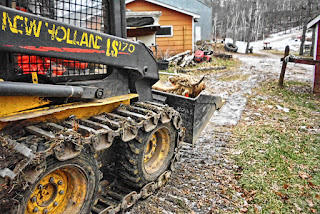 And this is the machine that has always done the chores around the place, the heavy lifting and moving of large bales of hay, plowing snow, digging a grave for a beloved equine, or pushing downed trees out of the way so they could be cut up. 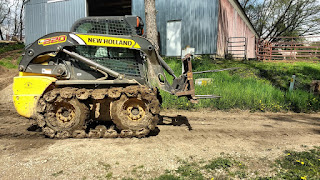 This machine is where Rich feels joy.
He is chomping at the bit to get out tomorrow and do some 'skid steerin'.
The Fixer put a smile back on his face.
It was a good day.
And yes, I am following the doctor's advice and have a follow up in 3 weeks.
This turned out to be a good day. The other half is still smiling.