Buggy Adventure along the Wintergreen Trail

I was going to try and identify all of these before posting. That is what I normally do.

Some of these are going to get a general guess of what they are like the following that I found along the Wintergreen Trail in the Kickapoo Valley Reserve.

Rich said he was 'ok' with me going for a morning hike. He didn't seem to like it or really agree to it, but I promised not to take a llllooonggg trail and I would get back before lunch time.

Since the Reserve had up to 7" of rain in spots, I knew that it would be buggy. The river had risen out of its banks and blocked several roads but those were open again. I thought I'd take the Wintergreen Trail since it runs above the river.

Right off the bat, I saw some cute little fungi. So I squatted to get a closer look and The Killer Mosquitoes attacked. I realized that I'd forgotten bug spray and wanted to kick myself.

I finally dug my head bug net and dropped it on over my baseball cap. Let the little buggers swarm me!

Charlie and I sought relief at one of the bluffs overlooking the river. The sandy soil was not conducive to the skeeters and we spent some time gazing at the muddy 'Poo and mourning the huge cottonwood that had succumbed to the latest flood. 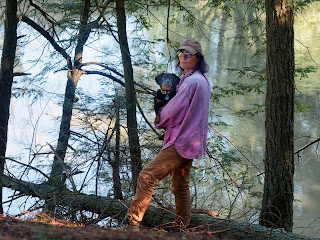 I made the executive decision to continue on. Most people stop at this point and return to the parking lot. The trail is really rather easy but mushy in spots and there are some stairs made out of rocks. The terrain is not bad at all, but nicer without the bugs. Fall, Spring, and Winter are the best times to hike this. I wanted to find fungi though and knew I had to brave the bugs.

My hands suffered and it was a new experience to 'shoot' while looking through netting.

I didn't do anything fancy but took quick shots and moved on. 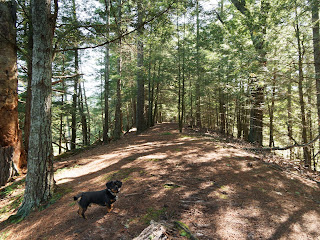 Once we got into the pine forest on the last bluff, the bugs weren't so bad. Still, a person didn't want to stay still too long. I gave Charlie a treat for being so good. I looked down the side of the bluff and eyed some places I'd like to climb down into when it wasn't so buggy.

Some of our cool finds on this part of the trail:

I don't know what these were at all. 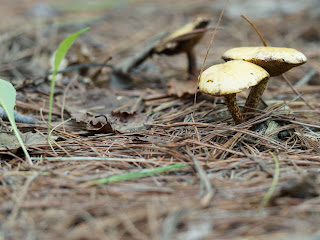 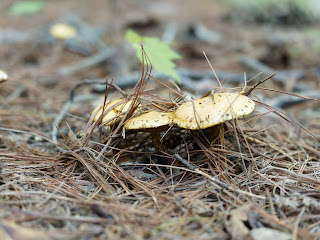 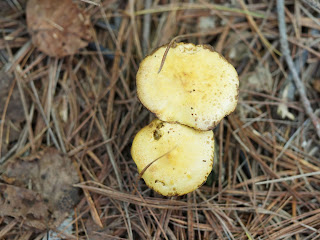 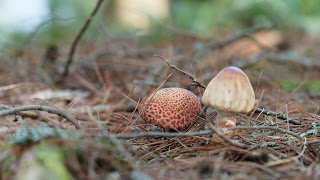 I'm pretty sure this was one of the Coral Fungi 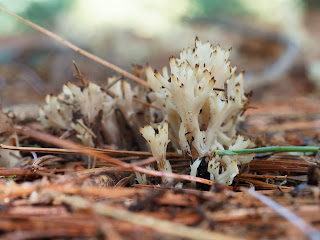 They hadn't grown very tall but I was really happy to see them. 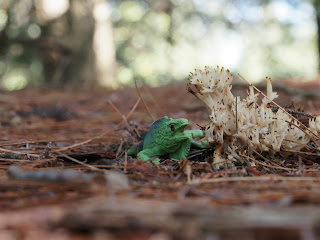 Now this next fungi/mushroom was pretty cool. I actually braved the bugs to get a decent shot. I found them also underneath pines and in a damp area. There is a small spring that runs over the rocks nearby on this part of the trail. In the winter it looks like this.... 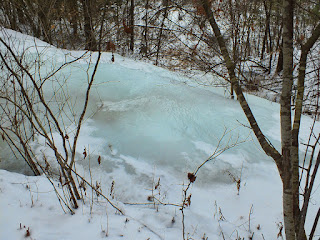 So Sunday morning, I found this! 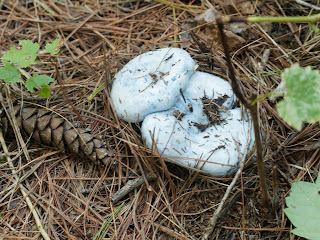 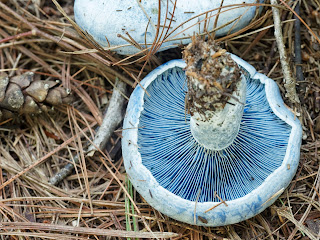 I believe it is Lacatarius Indigo or more commonly known as Blue Indigo. It was stunning and there were more hiding in areas around the trail and up into the woods.

That was quite the find.

I can't wait to go hiking again, though the next trail will be on dryer ground and not in low areas.

I am still catching up on all of the cool slime molds and other things I found in the days right after the rain. It was hot and muggy which the slime molds used to their advantage.

Fall is Fungi season if all works out right!