The best laid plans o' mice and men/ gang aft a-gley. ~Robert Burns.
From the poem: To a Mouse

These words came to me Friday for so many reasons. I decided to look up the 'quote' and read the poem. The words were used by John Steinbeck, but he took them from the poem written in 1785.

We humans look forward and back while the mouse only lives in the present.

My plans took a turn and I was really not happy about it. But then I decided to not walk around the house and be a Grumpy Grouch. I made use of my time by getting appointments [for myself and the 'Ru] done and so much more.

Things worked out just fine and our day was enjoyable. I even got to go out for a bit to hunt slime molds and strange fungi.

I know my time was limited because the forecast is for dry weather coming up. Find the slime mold before it dries up! 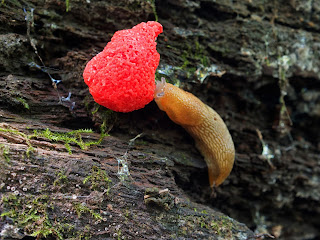 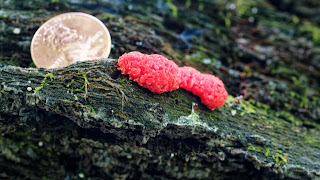 Rich mowed Friday like the dickens and I did the hillside slowly. I think it would have been worse if I let Rich do it and tip the mower. As it was, when he started it up on Saturday he had a melt down. There was a puddle of 'something' under where he parked it.

After an investigation I showed him that he'd obviously run over something he shouldn't have with the mower and busted up the filter for the hyrostatic...something or another. He got upset and angry and blamed it on the shop. I walked around the yard and found the protective cover to the filter and showed him wear he had backed up into some angle iron and pipe in his 'junk' pile and sheared off the cover....and dented the filter putting a hole in it.

I asked him why he mowed so close and his reply was that he didn't know it was there. I went around to the other side and spray painted other pipes white and blue.

Is his 'driving' and memory worse? Um, maybe. But for me to take away his mowing privileges certainly would be a slap in the face. He just plain forgot he had stuff there. And he really likes to mow.

I was proud of me for not playing the blame game and yelling at him. Instead, I'll make another trip to the shop and see how we can get the machine fixed again.

I filled Ol' Smokey up with gas [my Crappy Lawn old semi self propelled mower], checked the oil and fired her up. I tackled a section that Rich had been telling me he would do. It was knee deep and quite the adventure!

I ran Ol' Smokey out of gas and stuck her away for the next crappy project. I have one more tough and rough section to do but decided to go with plan B. Pony Mowing. 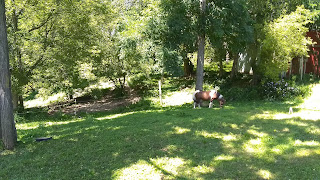 I use Sven first who eats the icky weeds and then Lil' Richard comes through and eats the grasses. If I give him 24 hours there he will crop it all close to the ground. This is a spot that has to be hand mowed because it has not yet been graded out. I've got to get the trees cut down first and then hire someone to come in and grade it.

I dropped my plans for KVR but ...

Charlie and I went this Sunday morning. We found some radically cool fungi and slime mold both at KVR and in our woods.