Here is a shot of Saturday morning's rain gauge. It rained hard off and on between 1 AM and about 3 AM. Lightening flashed non stop as did the thunder. I laid on the couch and was alerted by my weather app that there was a tornado watch, a flash flood watch, a flood warning, and a severe thunderstorm warning.
Also there was a lot of lightening strikes. 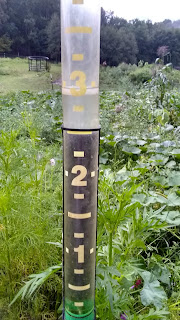 Well, I just laid there and watched the show out the south windows with the Quiver Dog who shook everytime there was a boom. He watched too. I guess Charlie was curious about the lightening.

He twice asked to go out and twice turned around and decided to cross his legs and wait until the storm stopped.

I finally slept and woke up to silence and dense fog enshrouding our hollow. As things lightened up, I pulled on the muck boots and decided to go check on how the critters faired over night.
Lil' Richard was standing in the driveway. He did have shelter from the storm under the front of the 5th wheel flat bed. But he had been busy rolling in the gravel to do his morning ritual of grooming.

The mules were walking around eating various weeds and grazing for the short grass. They too, had covered themselves with mud. It is one of nature's finest bug repellant and apparently it feels good.

I headed towards the creek checking to make sure no more tree tops had fallen onto fence lines. As soon as I stepped into the forest, the skeeters made their appearance and I pulled on the head net. I stopped half way down the trail and listened.

The summer birds were gone. No calls from the Orioles, Catbird, Wrens, and the Bluebirds. I heard a stray Robin. But the forest was a song of crickets and water dripping. I could actually hear water running in the creek which would be a first this year.

The shot on the right shows the creek bottom on August 8th and the left one was Aug 28th. The tiny arrows point to the same rock ... sorry that the shots are not perfect as far as being exactly the same. 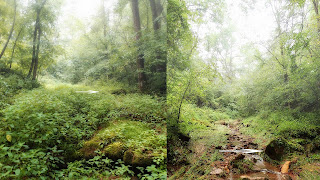 The there is me. I set my little pocket camera on a rock and hit the self timer.
If you look closely it may be apparent as to how wide and high the furious waters ran. It moved boulders and logs.
Never underestimate the power of water! 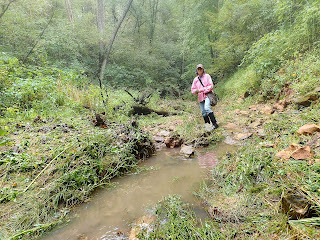 In places where things got jammed up and then let go the clearing of the plants is more evident.

The kids had built a rock castle out of some rather heavy rocks here. It got washed away and the rocks placed somewhere else. 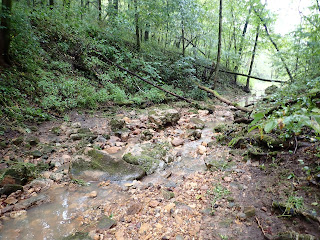 I am glad the creek was cleaned out like this it sure makes rock hunting more fun and spending time listening to the water is like hearing music.

Our temperatures at least have made a turn around. It was beastly hot and humid on Saturday, but thing have settled down this week.

I can't wait to get back down into the creek and spend some time just mucking about now that the temperatures have become a bit more livable.

Charlie can accompany me then as he can travel without getting stuck in the weeds.

Posted by Val Ewing at 7:00 PM
Labels: after the flash flood, after the rain, cleaning the creek, creek, hike, walk