What on earth can I do when it is screaming hot out and it is raining every day? Monsoon time!
Dog Days of August.
Monster Skeeters.
And very scary storm cells... 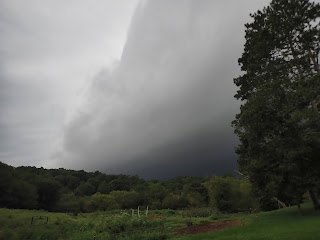 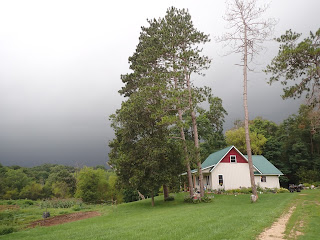 This one actually just had wind in it and blew right through. The temperatures dropped for a bit and then the sun came out and the heat went back up to miserable.
I did go out for a walk up through the woods to drop off some mail after the storm passed with Charlie. In a few spots, the bugs weren't too awful, but in others?
.......OHHHH my!
You may be able to see the swarm of very hungry skeeters attacking the netting. My father in law gave me this head net so it is pretty old, but very useful. I have about 4 others too, as I've tried different kinds, but this one works the absolute best. 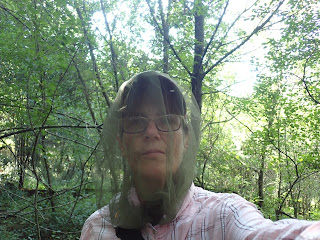 I did find some cool fungi, but I'll get to that later.

I needed to 'do' something.
The other half was watching boxing on Showtime at Full Volume.  I couldn't deal with the constant noise.
Mowing was out, his mower still needed to have more hydrostatic oil stuff in it and the ground was still mushy.
I needed some 'porch' time and some peace and quiet.
I am so pleased that we had outlets put in on the porch. Charlie and I can sit on the porch and enjoy a nice breeze from a large fan. He can sleep and I can read or do something else. 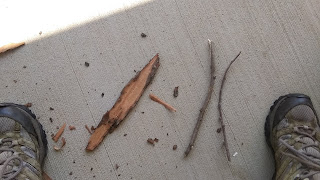 I wanted to 'find' a small chair appropriate for my larger Teddy Bear. Something I could carry into the woods for doing 'stuff'.
I checked out some online shopping sites and was horrified at the ugly stuff they had for sale. The choices were cheap looking plastic chairs that were pink, ugly, and overpriced.
I gathered down branches from the last storm and some bark.
I whittled the bark off from the sticks and instead started to figure out how to build a tiny table for the tiny bears. 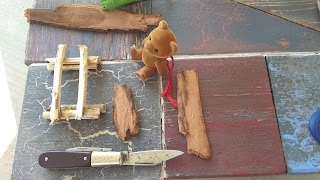 I am not a woodworker nor am I much of a carver. But I can peel sticks and use imagination. I wanted to concentrate on something other than running amok in the woods with the heat and bugs.
With a glue gun, I was able to make the 'table' just high enough for Lil Bear to sit on a bark chair.
I'd made a stick chair once before and it fell apart.

I have watched videos on line and have decided that I am not talented enough to use all sorts of the woodworking tools hubby has. I'd cut my fingers off for sure. 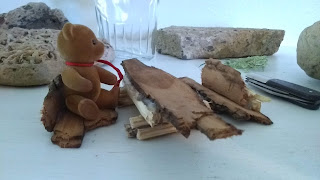 These little bears can be found in the kid section of most toy places.
I think they are called...Calico Critters. I am lucky to get hand me down toys.
I looked up little houses for them out of curiosity and was not pleased with the plastic cheap houses.
I am forming a plan to make my own little bear house. Every fun idea starts with a notion.

After all, I started on the primitive furniture and it isn't turning out so badly.
I even encased some flea bane flowers and chicory in the table top to imitate an epoxy topped table. 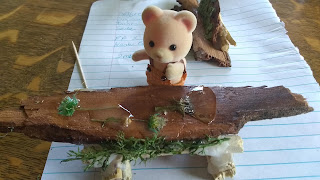 Oh wait, why on earth would a person like me put an effort into toys? Well, I think of how we played as kids. We made 'scenes' with our toys. We called them Set Ups.
I mean I could pick up a hobby that was meaningful. Like sewing or perhaps doing something practical like putting an effort into baking or ... some such thing. Maybe I never lost my love for creating and playing, right? [Generally, August is my month of putting up produce, but this year we only grew sweet corn, and that is coming on late..]
I figured if the Bears had a table to eat at, they might want to invite friends over for a meal. 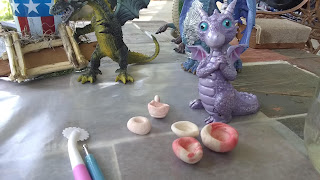 I took out the leftover Model Magic I had tightly sealed in a ziplock bag. I dabbed some drops of paint on my fingers and made some tiny bowls with a couple of dragons watching over my work.
Sorry, crappy picture...pointing below.... 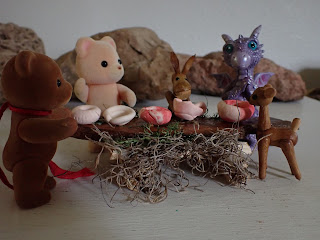 I did get a couple of great books, I'm reading one right now about the disappearance of Geraldine Largay on the Appalachian Trail. Geraldine was a woman after my own heart who met a tragic end when she got lost. 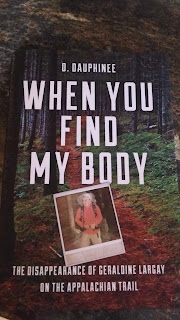 One of my dreams is to take on a long hike. Not the AT but perhaps parts of the Ice Age trail here in WI.
Posted by Val Ewing at 7:56 AM
Labels: head net, hot, hot and humid, making things, muggy times, not much, rainy days, skeeters, tiny bears