How do we love slime molds and fungi?
Well, I assume not a lot of people like it.

I don't know why insects, slime mold, and fungi fascinate me. Maybe it is because they are part of such an incredibly small world that we never stop to look at. 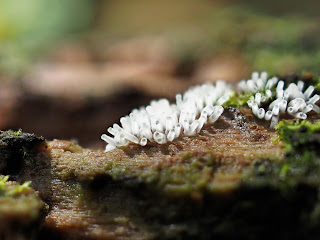 Take your pick. Hopefully I can go back out today and see if this grew at all and that might help ID it.
This slime mold [?] is smaller than a pencil lead.
Who am
I? 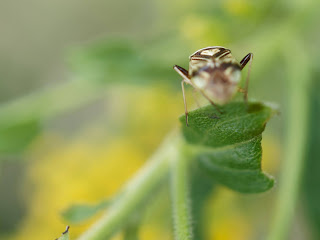 I don't know! There are possibilities, but none of the beetles I found while searching was this tiny. This insect is perched on one goldenrod blossom, that makes it very small.
More cool
slime molds 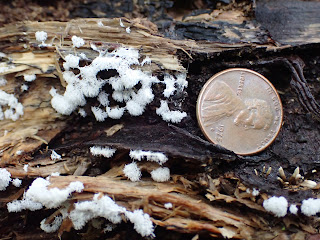 The penny is used to give the viewer an idea at the size of the cool white slimey stuff. It actually feels rather sticky. But its webs and details are so intriguing.
More cool
strange slime/fungi
white 'stuff' 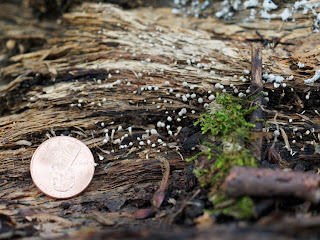 Of course, this could be white footed slime which if it remains in a moist and warm place would develop into something identifiable. But the forecast looks dry for the next 7 to 8 days.
And then on to my favorites. The Dog Barf/Vomit or another name? Deer Barf!
Or perhaps Scrambled Egg Slime.
Growing on my
mulch.
Harmless but strange! 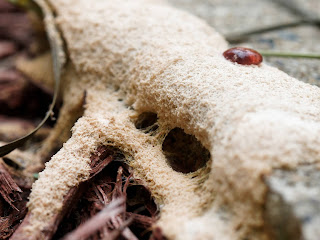 Growing on a stump in the pasture. 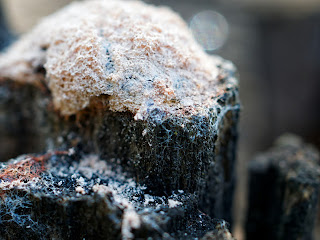 My favorite fall insect. The Orb Weaver. She decided to set up in my Petunias and has been catching those awful Japanese Beetles that destroy my 4 O'Clocks!
Golden Orb Weaver
Garden 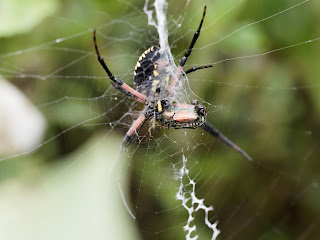 I like her, she is very productive. I've seen her wrap up about 2 of these beetles a day. I'm sure her 'kids' will love what she stored for them!
Lastly.
My only decent star trails/Perseids photo. I sat in the driveway yesterday morning and watched for a while before I decided to try and get a photo. There were 3 meteors that flashed through, but because I used LiveComp, the star trails sort of hide them. This was over my house which was Northwest and not the direction I was supposed to be looking. 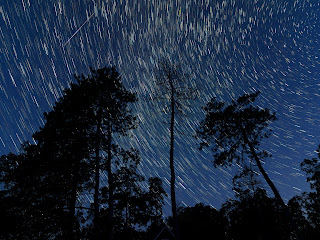 And for those who 'see' things. I took a shot of a Teddy Bear cloud. I spent all morning trying to get that SD card to work. I lost it all by reformatting it. That is the first time in 10 years that happened to me.
However to save the day, I took a terrible shot through the screen of a Duck while we were eating supper.
Ducky or
Bird
in a wire Cage! 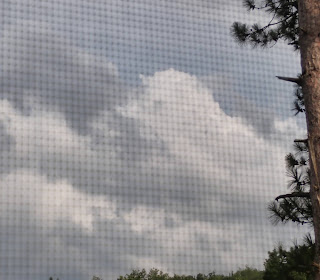 There.
I am off to find more curiosities in small places.
I still am not allowed to do strenuous things. So I am ducking out of mowing and taking the afternoon to go explore a refurbished trail at KVR.
[Crossed Fingers...that is what I wish to do!]
Posted by Val Ewing at 6:22 AM
Labels: cool bugs, Dog Vomit slime mold, insects, macro photography, macro stuff, naturalist curiosity, Orb Spider, white footed slime mold, white slime mold