Rites of Passage into Spring. 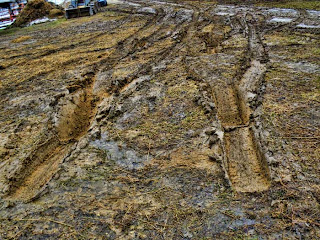 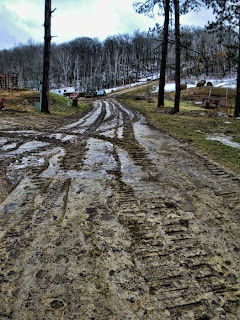 Him: I'm going out to hook up the hay hauler to the truck.

Me: Oh, okay.
[Get's busy doing some laundry until I hear the roar of the diesel engine. Over and Over.
Walk to window, peer out,
Him is in the truck trying to back up into the squishy part of the yard, the truck is flinging mud...uh oh]

Me: [above the engine roar I make a slice across my throat... he stops and I approach]
Um, why don't you go get your skid steer and pull the hauler out onto solid ground and then hook up the truck.

Him: Truck's already here, I'm hooking up...maybe with the extra weight I can get out.

[I scratch my head and look at the truck which is in 6 inch holes with all 4 tires gummy with clay and muck...thinking~~this would be a Kodak moment, why didn't I bring the camera?
Then thinking his reasoning makes no sense what-so-ever.]

Him: [Jumps in truck and revs it up.
Vroom, Vroom! The mud flies the wheels spin helplessly.
I am reminded of a scene from the movie *My Cousin Vinny*.
He grits his teeth and revs harder twisting the steering wheel this way and that.]

Me: [Make large motions in front of him so that he knows he isn't going anywhere. I make the cut motion again.]

Me: You are stuck, you are only about 4 inches from the undercarriage of the truck now.

Him: [Opens door and looks down.] Damn. [He says another curse word or two and then steps out of the truck. He looks at me and points at the truck.] You'll have to drive it! [Slugs off through the mud and muck.

I enter the truck, not much of a step up for me as it has sunk so low into the soft clay.]

Out comes the skid steer. 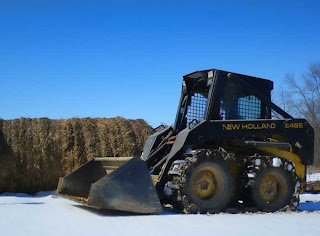 I've done this many times so I ease the truck into gear and put my foot on the gas. Gently, steady, sturdy...the skid steer bucks a bit as the tracks with spikes dig into the hard ground under the driveway muck.
The truck moves forward, I know I am still in muck because the truck won't steer, we are just sliding out.

Him: [Motions for me to stop]

Him: Gotta get going!

Me: Okay!
[He drives off the mud caked and goobered tires flinging chunks as he goes.
I look back at the mess and wonder why when he first got partly stuck, what in the heck made him think that going at it harder would get him out?]

It is our Annual Right of Passage into Spring.
The soft ground, soggy, mucky driveway,...and getting stuck. 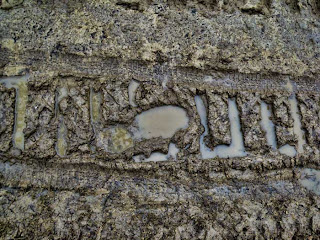