Charlie and I took off to a trail I hadn't been on since 1996. Hay Valley Trail. It can be a very long trail, but if one watches for another trail called the Washout Trail and takes that, a loop can be made back to the parking area.

I also knew that skeeters were going to be an issue. 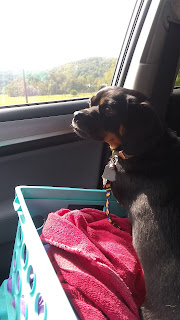 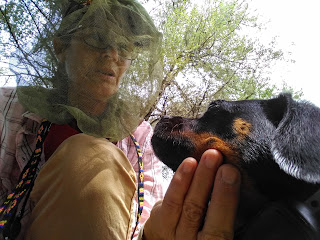 Here we are at the trail head with a little pep talk from me to my Trail Leader. I've been wearing this net and have gotten so used to it that I forgot I had it on. I tried drinking from my water bottle with it on! That was hilarious. It may look stupid, but it is a life saver when the bugs are out!

I took my pocket camera and brought my Infrared camera with with 2 funky colored and cheap filters along. I chose the bright yellow and the blue. 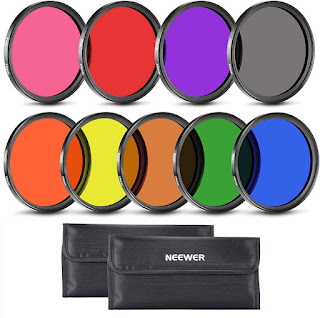 I've seen others experiment with filters like these and yes, they are cheap and generally not very useful.
But, I really enjoyed experimenting.
This was the start of the trail with the Yellow filter on.
I took this same shot with my little pocket camera and it really did not pick up the nuances of the sunlight and path. It was green with dark areas and overly bright areas. This is one of the places that Infrared does shine through. 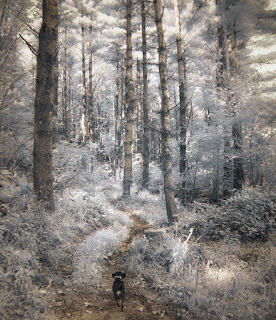 Off the trail I was able to spot a lot of small orange mushrooms. In fact if the bugs were NOT so bad I would have really had a lot of fun searching. But I didn't know how long the trail would take us to do, so I grabbed some shots with the little pocket camera and kept moving. 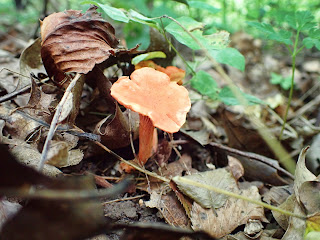 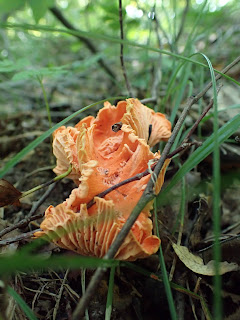 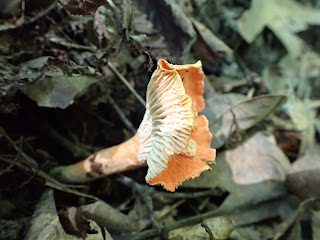 We found the foundation that was on the side of the trail. I do know the history behind the foundation. An old gent told me that this was part of the farm his parents had been removed from.
He'd buried his toys in a box not far from there and had always hoped to go back and retrieve them. This had been part of their Ice house where they kept things cold before electricity and refrigeration. 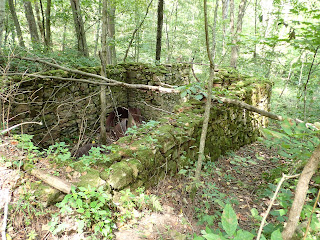 Foundation shots with Charlie - inspecting photographed in Infrared with the Yellow Filter on. 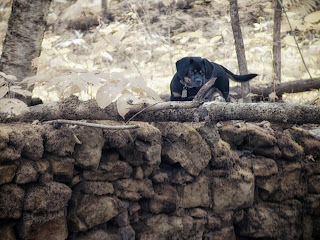 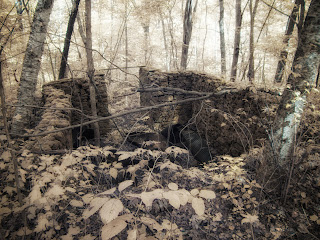 Just when I thought Charlie and I had missed Trail marker 10, we found it. 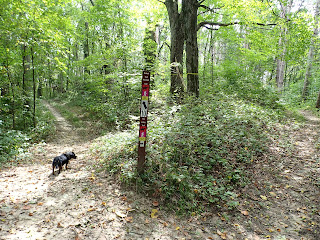 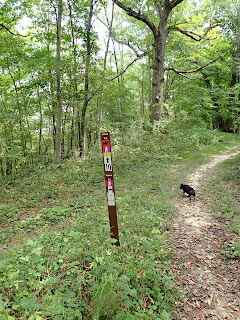 IF you are on foot, YOU do not want to take the wrong trail in this section, well, not if you are planning a loop. The Hay Valley Trail or Bailout Trail will take a hiker far from the trail head at Camp U.
Bringing a physical paper map IS recommended, do not depend on your cell phone for directions. Many areas have no coverage.
I thought of someone who sees faces in trees when I saw this old oak. He looks confused about the trail signs too. 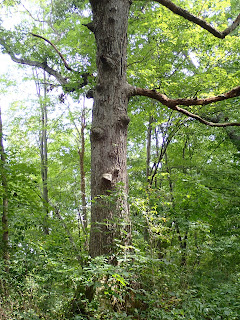 The tree on the left is dead, however if one looks down the valley past this tree, one can see the Kickapoo River.
At this point the trail has made so many switchbacks and turns, a person can be completely disoriented. One needs to keep in mind that the trail stays on the west side of the river and in its twisted up and down way, it runs basically north and south. 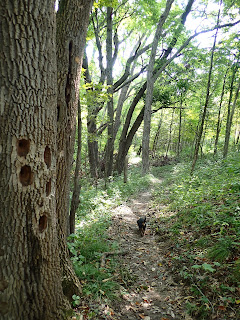 This is on the Washout Trail where Charlie and I had a small break for eats and water. I also put the blue filter on for the rest of the hike. 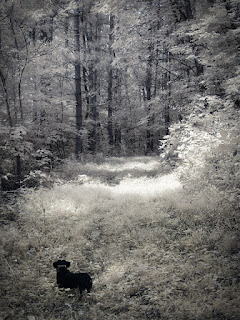 The Washout Trail is a hiker only trail. Aptly named as there are places that do wash out and water runs off down the middle of the trail. It is scenic and enters a majestic maple forest which stopped me in my tracks.
There was no way that I could even attempt to catch the incredible greens and dappled sunlight.
I tried and failed with the pocket camera. However. I can really see hiking to here when the maples turn and bath myself in the golden Autumn light and leaves! 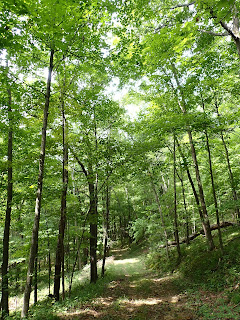 I knew from the map that the trail would connect back up to the Hay Valley Trail in the valley and I'd cross the new bridge back to campsite U.
When I approached the valley floor there was a trail split.
One went left and uphill, the other went down and around a huge open field and into the woods.
I swatted skeeters and opened the map. No such split was noted on the map. There was no markers and both trails looked used. I walked around the field trail for a few minutes and decided this one probably could be it, but it felt wrong. I could hear vehicles on Hay Valley road where I had parked.
I took a reading with the map and the compass and decided to take the other trail. Halfway through that trail I came across trees that had blown down and had not been cut up. At that point I realized I was not on the proper path but probably on a trail used by the reserve workers when they did work on other areas of the ridge above me.
I muttered a word or two to Charlie who was now dragging his butt. I picked him up and went on.
I ended up on the edge of a marsh that connected to the Washout Trial. My choice of going up and then down to the marsh worked out better. Less water to walk through and it was shadier. 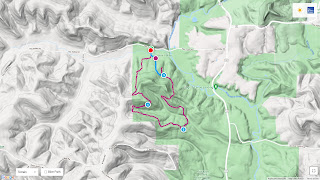 We made it back to the car and then walked to bridge 6 and admired the quiet Kickapoo River. Just last week it had been raging over the road where I stood.
One last shot with the blue filter and the IR camera and we headed back for snacks in the back of the 'Ru. 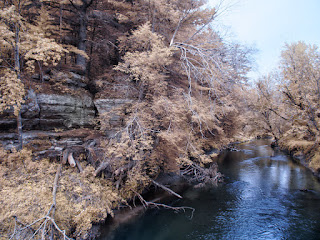 We came, we adventured, we survived. And the skeeters never carried us off.
I will do this one again in the fall and in the winter.
I doubt this trail is often used by hikers. Not because it is really difficult, but that it is a bit off the beaten track.
That makes it a Great Trail in my book.
Posted by Val Ewing at 8:18 AM
Labels: compass, decisions, Hay Valley Trail, hike with Charlie, hiking, Infrared Filters, Kickapoo Valley Reserve, maps, Trails, Washout Trail