There is something about aging that is great and wonderful and also so interesting and sad at the same time.

Of course none of us young folk ever thought that we would age. Surely we would never become like our Great Grandparents, Grandparents, or evenlike our own parents.

Oh what a surprise! My father would have been 103 if he were still around. My mom? How did she become someone frail and in her later 80's?

My husband had warned me when we first met that he had severe health issues from his days in the Army and overseas. But we became soulmates and that cannot be changed by anything!

We forgot that aging would creep up on us too. I used to roll my eyes a lot when others would complain about their health or how many scans they did, or the meds they were on. Rich and I would wonder would we make that the topic of our everyday discussions?

Then Covid-19 arrived and I could no longer visit his mom twice weekly in the nursing home. It dawned on me that Big Berthie was lonely for family, even if she had forgotten about where she used to live and had lost memories she used to have...she never forgot about her son or daughter.
She would recall that her daughter would call, but not recall why her daughter didn't visit.

She would talk to Rich nearly daily but not recall that he too, was a very ill person and had trouble getting out and about.

Some days I'd visit her in the home and she'd be asleep in bed. I'd sit in her room and read a book or return when I knew the staff would get her up for a meal.

I used to think that going into a nursing home to visit would be too dreary, too nasty, and maybe I'd catch something from all those folks I'd see in wheelchairs and laying in beds. Or simply by being there amongst all those folks too frail to live on their own that I'd catch Sadness and be Sad.

What I did find was the reverse. I found that visiting at meal time was actually quite enjoyable. There was laughter and jokes along with insane conversations that only could occur in minds that didn't connect to the Wifi. Or to put for others to understand, they had a bad sector in their hard drives [or brains]. Rebooting was not the solution. We just went with the flow.

Covid-19 has changed the very fabric of our social equation. Isolation for those who have health issues is more severe than ever.

My husband says he'd rather die of a heart attack than Covid. He never wants to see the inside of a hospital again. His experience on the Covid floor last year when he did not have Covid was insane.

He can remember that. The Bubble Heads and Space People in the middle of the night. The drugs and the nightmares.

So we set rules down. I get food and supplies. He stays home. He has always been a bit of a loner, but at an auction or other event like that... he used to be so sociable and outgoing.

He does love company even though he says he doesn't. He doesn't want company because he doesn't want his past friends to hear him talk with Aphasia or see him struggle to breath.

Seeing his daughter or grands or even his adopted 'kids' from Missouri make him smile and grin for days.

And so the other day... I was monkeying around with stuff in the kitchen and happened to have my camera near me. I turned and so this. 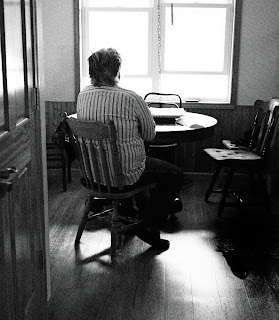