We had a hard frost Sunday morning. I thought I'd take a walk to the creek and around the pastures to see if I could find anything 'frosty' and cool.

I pulled out my 30mm macro lens. The one that you have to get down and dirty with. Well, not really down and dirty ~ but only if you want to...and I often can be found nearly laying in the dirt or on the forest floor bugs be damned.

First let me say that we have an incredible forest around us. There is so much to see that it is overwhelming. I have to go to the ridge to get a landscape shot. The woods becomes a place of little things to notice and see. The tiny flowers, the moss, the lichen, the fungi, and the insects. I seem to notice and enjoy finding the little things sometimes more than the Big Picture.

Here is a dandelion from the yard on Saturday. Those little curls just beg to be photographed. The flower on its own isn't impressive, but what is inside it...is.

[Shot with the microscopic feature on my TG6 Olympus pocket camera.] 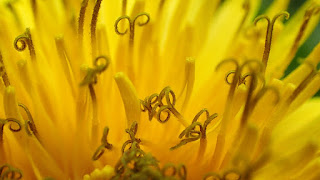 I have no idea what kind of insect this is, but it has pollen on it from the dandelion so I imagine it uses it as food? Shot with the 30mm lens. The frustration of this lens is my inability to 'get' all of the insect in focus. 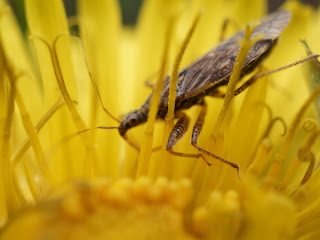 So I went searching for frosty things and bugs. The sky was unremarkable other than the sun just coming up. I spotted a doe who whistled at me and ran off. But I was more interested in the tiny things I could find. 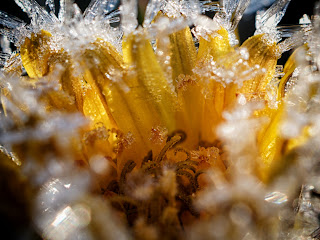 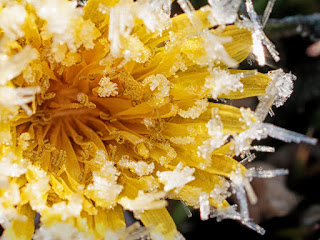 I was pretty excited over the dandelions. When I showed these to Rich his reaction was rather ambivalent.
The ice crystals were pretty damned awesome.
I decided to head on down into the woods and see what I could find along the creek. Was it warmer near the creek? Or was it colder?
My shadow in the frosted pasture. 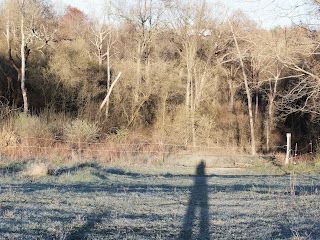 It took me a while to get to the creek. I kept stopping to peer at tiny flowers coming up and looking at the violets that were still closed against the cold. Berry briars had frost on some leaves as did the multi floral rose bushes.
The sun was peeking into the creek and a tiny bit of steam was rising from the water. By mid summer this creek will be obscured with Jewel Weed and other plants. The view in early spring is always amazing. 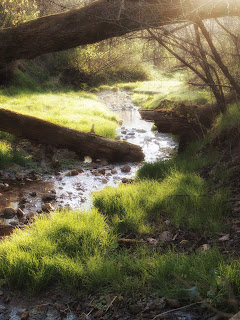 I went in search of moss. Who would have guessed?
This type of moss had leaves like cups that caught the moisture in the air. I thought this was ingenious. No wonder moss could live through droughts. This moss was just above the creek on a rock. 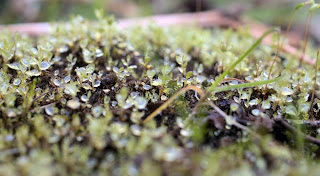 And this moss was on another piece of wood. I noted that it was 'flowering'. Well they really don't flower but do release spores. The blue is the creek just below the moss covered log. I have NO idea what type of moss it is. 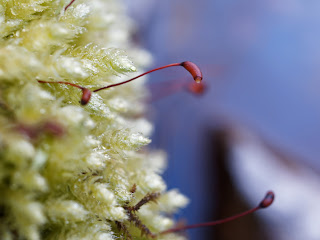 Imagine my delight to find some more moss that looked like the little spore things had exploded!
I think the proper name for this may be Sporophyte but do not hold me to it. 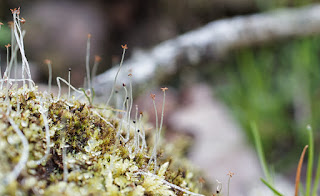 Here it is cropped in tighter.... 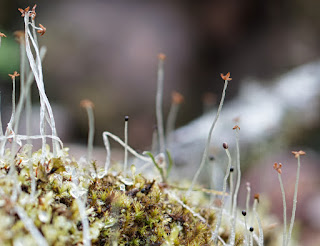 I also found many ferns beginning to unfurl. The maidenhair fern is one of my favorites but I found about four different kinds. 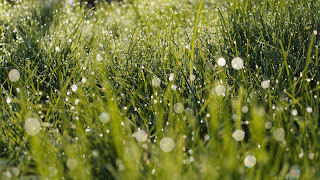 I do like tiny things. That world is so fascinating.
Looking forward to today's weather as we are supposed to warm up to nearly 70!
Posted by Val Ewing at 9:35 AM
Labels: 30mm lens, creek, dandelion, frosty, hike, macro photography, morning pasture, moss, spores