I had an idea how to do Ma & Pa's Trail and pass by the remnants of the ice caves. I dislike straight out and back hiking.
So I dove deep into my memories of riding this area pre KVR. There now are 50 miles of hiking trails.
30 years ago it was more like 100 miles of back and forth trails.
When KVR took over, they eliminated many of the equine trails due to erosion and safety concerns for the people and their equine.
I knew from ancient memories that it was possible to make a loop from Pott's Corners to Ma & Pa's and back to Pott's corners. It is recommended for hikers to stay on the trails so they don't get lost.
Those old trails still exist and I wouldn't take a horse on them.
My fellow explorer, Bill, came with me. Bill is an amazing hiking partner. He doesn't mind me pointing out little things. He doesn't mind it when I stop to investigate something I see.
He doesn't mind following me into the unknown.
Bill has no sense of direction, he tells me. But he has a sense of wonder. He is retired from being an IT guy. He can whip up a spread sheet and do financials in two seconds flat.
He can fix just about anything and rebuild a mower or bicycle. He is curious and loves to fix things.
I find it amusing that he puts his trust in me not to GET lost.
Charlie is my other great partner. He has a knack for finding deer trails which are often old equine trails.
Here we are on the Ma & Pa Trail which eventually crosses Weister Creek. 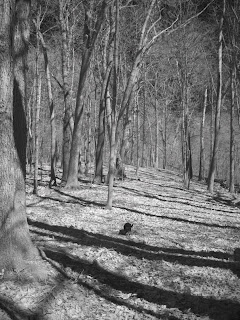 If memory served me correctly, the bluffs along the creek had an old trail. I can recall riding along the bluffs both above and below. I remember our group stopping so they could point out The Hole in the Rocks. Bill and I found the hole and the early spring sunshine shone right through it. [Can you believe I did NOT take a photo?] 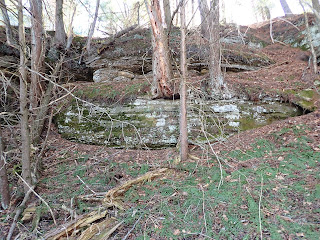 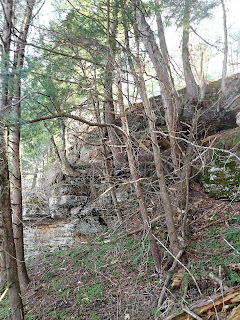 I was more concerned with finding the faint indentations of the old trail.

With cries of delight I climbed a bluff when I spotted some very cool Lichen.
Dragon Horn Lichen. See the pine needle on the left? It is tiny but bluish. Some cool things about this lichen, apparently is glows under UV light. I think the name is just cool. [Taken with my TG6 pocket camera] 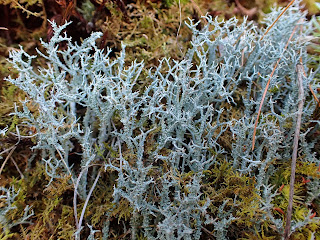 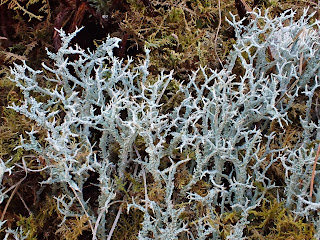 Charlie led and we followed the faint trail. Bill asked me if I knew where I was and I said I sure did. I stopped so he could get his bearings. We listened for the road traffic and then I pointed out that if we followed the Creek we'd end up at the Ice Caves.

He gave me a look.

Soon enough, we climbed a steep old trail and crossed an icy ravine. I asked Bill to take the lead up and over. 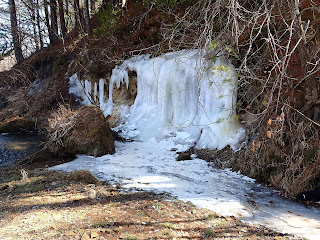 And then there we were. He recognized the ice formation from earlier this winter. 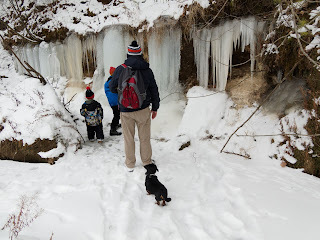 We took a break and then headed back to our vehicles. 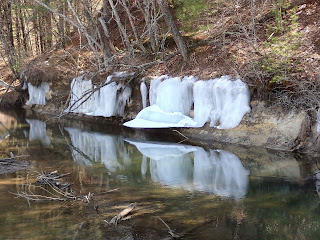 The icing was probably going to be gone after this weekend of warm weather.

Mission accomplished.
We did a neat hike without backtracking and covered 2.8 miles according to the Map My Hike App.

no one got lost.

However. I need to go back and 'shoot' a picture of the Hole in the Rock.