The Supervisor decided he needed to sit on hubby's lap and oversee his 'couch realm' today. He is definitely shows a preference to hubby.
I am just the slave to Charlie. I feed him, potty him, walk him, and tend to all non couch needs.
Charlie waits most mornings until Rich gets up before he gets up.
During morning Imbd TV, Charlie rests with his head on Rich's leg.
Don't get me wrong, the dog loves his long walks. Yesterday we got a nice one in and Charlie got to chase two squirrels and one rabbit.
He spent the afternoon snoozing next to The Boss. Rich has even allowed Charlie to occasionally take naps with him on the bed! 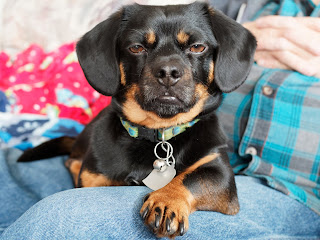 The afternoon...while the guys snoozed, I washed the stairs and peeled off the old butterfly stickers. I was ready for something different. I was going to leave them plain, but I like something on the stairs so it isn't all one color and to give the steps definition while running up and down them.
Yeah,
I'm a dork.
It was fun adding some cheer to the stairs.
I think this summer I may repaint every other stair white. The paint I use is porch paint and it really holds up well to foot traffic and washes up nicely. 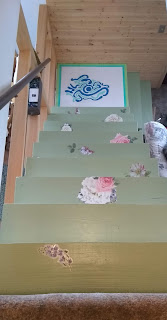 IF I had my way, the walls in the house would not stay pure white. I would add color here and there.

I brought in the rocking chair I have on the porch. I'd purchased it two years ago for about $5 dollars. I painted this chair last year with a few different bright cheery colors.

I was going to hand paint a design on it, but then decided to go with some of the leftover stickers I had. 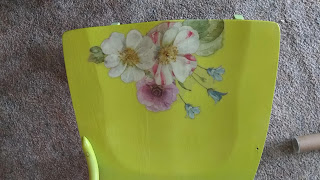 Done!
It sits on the porch to greet folks as they walk up to the house. 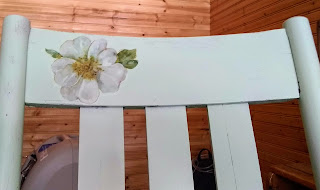 I sit in the rocker often during the summer. Lazy afternoons are spent there reading or just day dreaming. Charlie has a rug I put on the bench and he sits on that so he can observe the yard from a higher perch.
My last thing of the day was to order fencing supplies to re do some of the mules' gates and add a third electric line for Mr. Pony Baloney and Goatie Goat to graze some problem areas. They cleaned up a hillside for me last summer so I have an area for the two of them to work on this year too. I have to replace some insulators in the woods where deer have gone through the lines and busted them.
Today? I pick up my new glasses! It will be nice to be able to see the distance again. Poor glasses may have been a big part of my continuous headaches over the past year.
Posted by Val Ewing at 7:17 AM
Labels: Charlie, couch, rocking chair, stairs, stickers