So just after chores the other night the power ... blam

I didn't get too excited because we have 'smart' meters. They notify the local electric company that the power is out and things get fixed.
After about an hour, I texted my neighbor asking her if she was out. I had no internet, no land line [it sure makes a case for having a Hardwired phone and no wireless phone]. My cell phone was at almost nothing percent with no bars.

Since I didn't hear back from the neighbor I started to walk up to the top of the hill to knock on there door. By this time ol' Grumpy was having fits. His mindset doesn't do well with things like no electric. They had power and she'd call it in for me.

I grabbed a headlamp and sat down to read a book. Grumpy started pacing and yelling. I should have called, I was wrong, why did it go out? How come? I explained the best I could that ALL technology had failed us at the moment. The Electric Company didn't get notified and we had no hard wire phone and the cell phone was useless unless I went to the ridge.

More yelling. I started reading wishing I had more battery so I could tune in Pandora. Hmmm. I could start the car and go charge up the phone, drive to the ridge and listen to music.

"Lipstick Powder Horn Mushroom. Description: Fruiticose grayish or greenish slender, unbranched stalks arising from a finally scaled surface and topped with a blunt red tip..." I tore a scrap of paper and wrote on it:
Found March 23 in the morning midway up a hill on a mossy fallen oak log with 3 or 4 types of mosses mixed in. NW facing hillside--very shady in summer. No idea what all the different mosses are as of yet but will search the moss book.

[Photo taken but obviously not posted with no power] 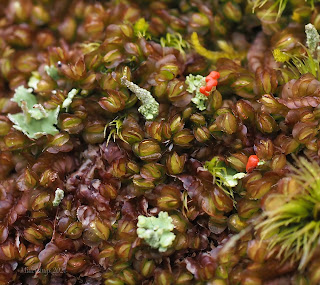 Another note to self:
Look up a bit more info on macro and in camera stacking along with Helicon stacking.

I got up to get a drink of water and there was more yelling. I was wasting water. I reminded Grumpy that we were on a shared well and the pump was up on the ridge and it had power so we did have water.
Long ago I'd talked to a counselor regarding this sort of behavior. The best advice I ever got was to not think of him as the rational person I usually knew. But to call him in my mind Irrational Man. Really nothing I said or did would change Irrational Man's mind.

I opened up a notebook and started to make a list of things I'd like to explore with photography this summer. Small things in particular. The nasty icky ugly weeds that grow. Fungi? Lichen? Mosses and Liverworts. Things close to the ground. Poison Ivy? Tick weed, wild parsnip, and hawkweed.

Eventually two trucks slowly came down the hill. Vernon Electric. I walked out to talk with them. I kept my distance and the first guy checked the meter and then quizzically looked at me and opened up the box on the post next to the meter.

"Here is the problem," he said and pointed his light at a switch. He pulled it down and then pushed it to ON.
Apparently it is the original on off thingy that controls all the other thingies.

"You might want to call an electrician and have him fix this. It is odd that its a 100 amp. It is old. Update it to a 200 amp."
I shrugged and pointed out that I had no idea that box was something that was ours so I never touched it. I apologized for not knowing that but also was very relieved that this incident happened as we needed that box to be upgraded.

I suppose it was missed when we upgraded the house in 2016.

Grumpy was hovering when I came in. I explained to him about the box and that I'd call our electrician in the morning.
He was calm and wanted to watch some TV.

I marveled at how his mind worked. Crisis over and all was forgotten. I wanted to really get back at him in some way and remind him that he'd hurt my feelings.

Irrational Man. It just works that way.
Jake will be showing up in a few moments and I'll need to go back out.

I asked Grumpy if he would be okay without power while Jake worked on the box.

Update sort of....
Don't feel bad for me, I'm used to this. Yes I was really upset at his inability to understand reasoning. I had to walk outside and stand for a while and take a few deep breaths. This is what a CareGiver does. Screaming back at him would not have made anything better.
I kept telling myself I was better than that. The worst part is not having a way to release the pressure.

I so need to get back to CrossFit! Be well.