One day at a Time

We'd met with the Speech Therapist at the VA. The young lady was fresh faced and new, doing her internship with Veterans. I sat quietly while she did an assessment. I think that was the hardest part for me, watching my husband struggle with certain things.

However, the ST said he was doing quite well and normally they weren't able to see 'stroke patients' this soon after a stroke. She felt that he would make great strides.

Rich isn't sure about the great strides. But the therapist kept encouraging Rich to challenge himself with tasks, but to remember that when he got tired it would not go as well.
She looked forward to meeting with us next week.

We got home just as the first thunderstorm hit. The animals were eating hay quietly and the grand kids were sitting on the couch watching a DVD on a small portable player.

After the second round of storms blew through [we made a quick trip to the basement when that storm came through], the kids broke out a new deck of cards and asked their Grandpa to teach them some card games. 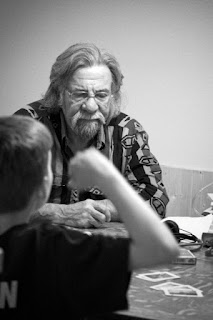 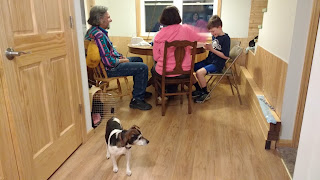 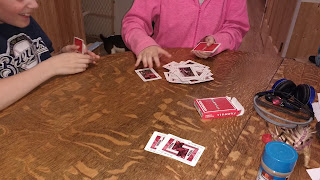 Without really knowing it, the kids were helping with Speech Therapy and Cognitive Thinking skill therapy.

Yesterday was a busy one even though Rich didn't think it was. We put round bales in with the gelding lot, the calf lot, and the cow lot.
For lunch we went to the local restaurant and had a really great meal with the kids.
We stopped afterwards to see Rich's mom.

For a person who has had a stroke just 12 days ago, that is a lot of activity.
I could tell that he was getting rather tired.

Our week has been busy with visiting helpers and drives to the Madison VA for appointments. Not to mention the phone calls I have had to make or receive for more appointments and follow ups.

After the kids left, Rich proclaimed that he needed to rest. Indeed he did.

I thought I'd run down to the "Morel Area" and see if I could find us a handful to cook up as a tasty treat.

I found some rather large ones on the upper north side of the creek bed. 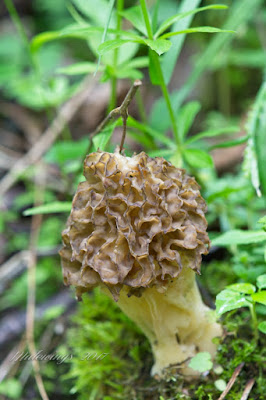 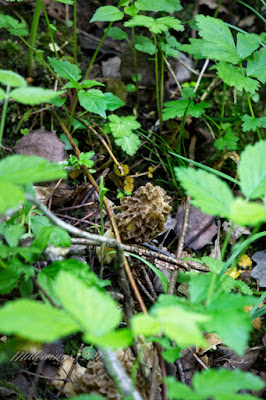 Morris and I gathered up a small bunch and headed back home. I walked fast, but still managed to stop and photograph some wild Columbine, wild Geranium, Jacob's Ladder, and wild Strawberry flowers. The Mayflowers are blossoming now.
I wanted to head to the back valley to photograph the Trillium that litter the north hillside.
And I thought to myself.
Perhaps next year.

This spring was going to be too busy for long wanderings.

I took a slightly different path than normal home. The storms that blew through the night before had uprooted an old oak tree which fell onto a box elder, which fell onto another box elder and basically made a huge mess.

Unfortunately, it laid across our hot-wire fence. I do have to say that the fencing we use is amazing. it is 1/4" soft braided rope fence. After Rich cut a chunk out of the log we were able to replace the broken insulators and the fence was back on and hot.

And no. He probably shouldn't have been running a chain saw. However, it needed to be taken care of. 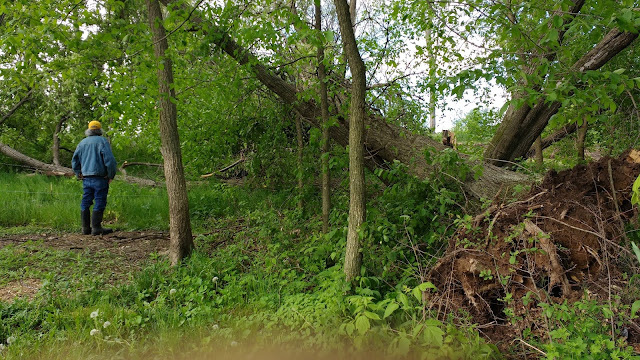 It basically wore him out physically. And I told him that the rest of the work would just have to wait until we had a chainsaw party. 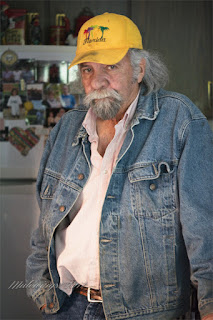 “Love does not begin and end the way we seem to think it does. Love is a battle, love is a war; love is a growing up.” James Baldwin
Posted by Val Ewing at 5:48 AM
Labels: After Stroke, after the storm, cards, downed trees, fixing fence, grand kids, life on the farm, Rich, skills, speech, therapy, updates