Conversations on the Porch

Yesterday was designated as "Quiet Rest Day". We'd had a busy Saturday visiting with our Farrier pals for graduation.
We ended up being the last guests to leave. The guys sat in one of the rooms and conversed, telling stories and laughing a lot.

My stepdaughter Stephanie called to let us know that they would not be able to visit and do fencing. Dennis may have gotten a flu bug so they were staying home.

There was somewhat of a chain reaction to that. Rich called his mom and I could hear her through the phone. She decided that she was going to go get "The Flowers and put them in the cemeteries herself, but she didn't know how."

I'd forgotten about that 'tradition' since in my family we don't know where most of us are buried and some of the family are just ashes spread hither and thither. In death I want to be a free spirit myself, spread to the whims of the winds.

I volunteered to help do that, but not until Tuesday. Rich seemed to be still bummed over the phone conversation so I checked the weather and said we'd go fishing on Wednesday.

Then I checked my paperwork. I wanted to smack my head again. I had VA and Gunderson Lutheran phone calls to make and arrange. I had to change GLHP appts and confirm that they are authorized by the VA. That meant phone messages and people getting back to me. If I made the calls and was absent from home I couldn't deal with them. [Later I smacked my head. Cell phone!]

I told Rich that we were having a rest day. He went back after breakfast to lay down. Speech and language comprehension was foggy for him. I told him the brain needed a rest.

But the fencing I'd put off still had to get done. I texted my neighbor and per our previous conversations,...Justin had volunteered to pound posts. He is young and strong and likes to pound the posts. He also volunteered to mow our yard at some point. I checked those worries off my list.  Fencing to commence today after the chores are done. Mowing ... I was off the hook!
Then Justin offered to help me figure out how to start our little tiller.

I sat down on the porch and felt slightly guilty about not working on something. So I got out my paints and grabbed an old skull that had been sitting out and was badly weathered. 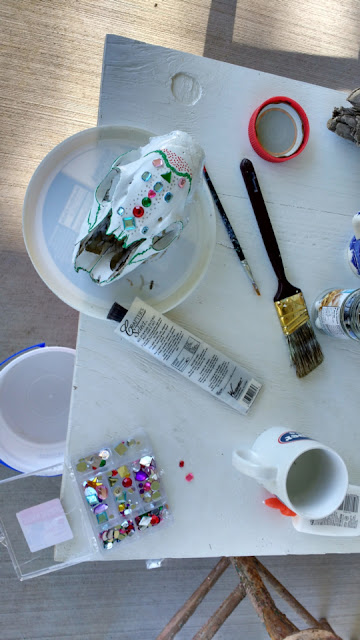 I didn't intend to make it a piece of 'art'. I just kept messing around with it while my mind wandered and I listened for Rich to wake up.

When he did come out on the porch he sat down and stared out across the winter pasture.
"How am I...going to." He waved his arm at the donkeys and mules basking in the sun.
I leaned over to listen to him. I wanted him to be able to finish his conversation.
"How can I?" He made a motion with his hand and then dropped it.
"The animals? Selling them?" I prompted.
"Yes. I can't talk good. I can't...find...the words."
"I can make the phone calls or we can use speaker phone to do it." I offered.
He sighed and nodded. He looked out again and asked, "What happened to me? What did they do to me?"

The details of his stroke are confusing to him. We went through the process slowly. I went over what happened with him telling me some things. The stroke, the 911 call, the ambulance ride to Vernon Memorial. Slowly and quietly we went through that day again.
He shrugged and looked out. "It isn't all there." He searched for words. "I can't...find things?"
"You can't remember things?" I asked.
"No. I don't remember going to Vernmorial."
"Vernon Memorial?" I prompted.
"Yes." He makes a motion next to his ear. "Then they scrambled it in ... my head. They ruined my head. Broke it."
"The blod clot stopped your brain from getting what it needed and it broke some parts that help with your understanding things," I said carefully.
"No. They broke me." He answered and sighed.

He asks about the surgery and we go over how the surgeon went through his artery and to the brain to bust up the clot. I demonstrate it with a hose and a paint brush.

He seems to understand then asks why he has to go back.
"To see the guy who worked on your brain?" I ask.
"Yes."
"Well he wants to see how you are doing. And prepare to fix your aneurysm."
He doesn't recall the doctor or us talking about that.

He is a guy who wants the truth. I explain that he has an aneurysm in his brain also that should be fixed sometime late this year.
"Will it kill me? Am I dying? I feel like I am dying." He states. "I am no worthless."

His eyes are troubled and I reach out for his hand over my paints.

I want to say we are all dying and hand him cliches, but I don't. We hold hands and I quietly say, "You are not worthless. You are not scrambled. You are my husband that I love very much."

I move my chair next to his and we hug and hold onto each other for a long time. Silence. His hand squeezes mine.  I think, "Yes dear, if the aneurysm goes, you will die instantly and without any pain. It troubled the surgeon, but it is like a sword hanging above your head. However let's take things as they come, day by day." But I stay quiet. He doesn't need to be troubled by something like that when he is struggling each day to comprehend things.

I am reminded of the morning I sat with him in the hospital when we struggled to communicate and he kept asking about being "Alone."
He had been frightened by his brain turning on him and was afraid of being 'Alone'.

No my dear, I will not leave you alone. I will be here for you.