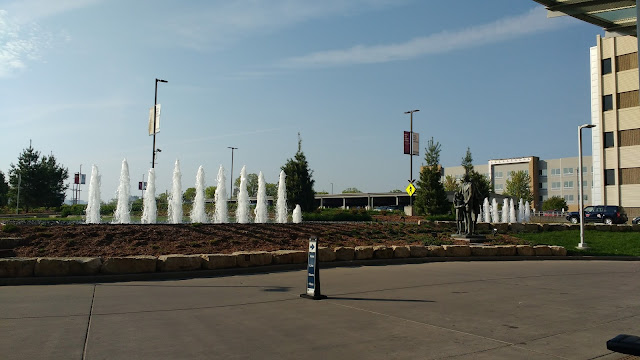 A person's life can change in a flash of a second.
One moment I was getting ready for work, the next moment threw me into a bizarre life turning event.

In 2015 during Rich's cancer treatments, he had a TIA. The Neurologists from University of WI said that if you have a TIA, your risk for future stroke is higher.

Well, he had a CVA or cerebral vascular accident on Saturday in the predawn hours. The ambulance transported him locally and the trauma center was notified by local ER.
By the time I caught up with him at the Trauma Center in LaCrosse at Gunderson Lutheran Hospital, they had prepped him for surgery and were whisking him out of the room.
A kindly white haired man took me to the side and we talked about what was happening.
Turns out this kindly white haired fellow was a Neurologist. He explained that they were going to 'go in and remove the blockage' and they had enough brain to save.
He also let me know that the brain was a mysterious thing in a way and only time would tell as to my husband's recovery and progress.

I'm going to spare you the details of the past four days. And say this.

I am married to the most amazing person. He impressed Physical Therapy so much by his physical gains and strengths, that he was released and allowed to come home with constant supervision.

The area of the brain that had an 'injury' relates to speech and some thought process.
When words evade him, we have been finding another way to communicate.
Too much going on at once can be a bit confusing.

We have some real work to do together.

And some serious fishing to get done this summer.