Gardens and Donkeys and Ponies

Well now those things really don't mix together now do they? Or do they?

So why on earth would I even put them together in the same blog post?

Well because I worked on these things in the past couple of days.

The new garden. It is in the place where all of the 'stuff' from remodeling sat most of last summer and through the winter. I dug it up after cleaning up the bricks and pieces of carpeting. I hauled the mess to the dump. One huge load that filled the back of the Jeep cost only $10 to get rid of.

Anyway, I looked at the huge ugly bare spot and decided early that this would be a fun spot to put some iris's and maybe some other plants.

And the project kept growing. I put in 50 vinca plants and tossed in some other transplants.
Last week while we were at the hardware store, I begged for a garden cart and hubby agreed to buying me one. 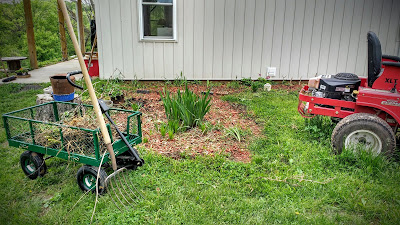 I am using old rusty and busted up buckets as planters again this year. I think they make a fun contrast to the beautiful flowers growing inside of them. 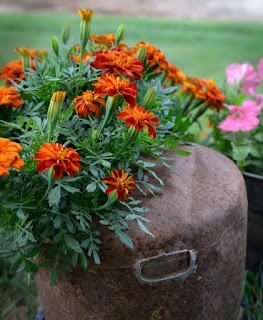 
So I began to add a few things like a brick border. Bricks I found in a pile over by the garage. And some rocks from another garden.
I just place things and then constantly rearrange them.
I thought just to be fun I'd add a Yard Gnome. I am not a fan of Yard Gnomes, but it would be a fun little twist anyway. I also considered a Dragon.
Someone notified me of this item: The Gnome Massacre 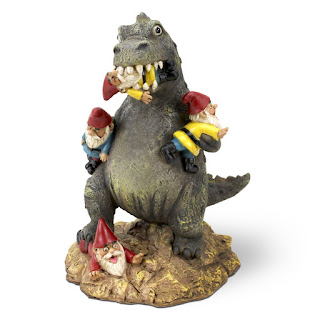 Now this would be perfect and would definitely satisfy my strange sense of humor.

I looked it up on Amazon and some other sites. My finger was itching to hit the 'order' button. I may still do that.

Imagine my surprise at finding some marigolds sprouting up in the 'new' garden area. I tossed last year's marigold blossoms and dead heads into the 'junk' pile. Apparently the seeds were good!

I've arranged the odd rocks I collect while hiking in Awesome Creek. The neighbor kids call it Dog Poo Rocks. I admit, they do look like dog poo. But they are such odd rocks, I have to have them somewhere! 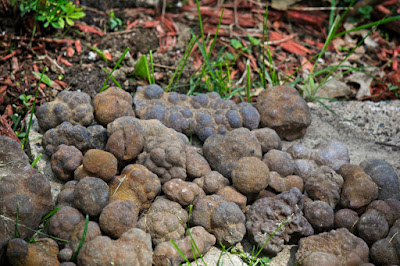 Someone else said I needed to put some of my 'skulls' in the garden for display.
Hmmm, that would be interesting too. I should take some of those old skulls and paint them.

These flowers begged me to purchase them at the store. I walked by the Petunias and was ready to put some into my cart when I stopped and looked at these. 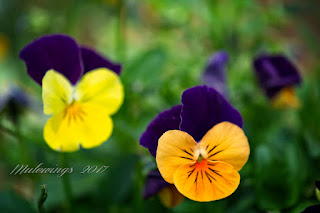 My father was pretty fond of these flowers. I've heard them called Pansies and Johnny Jump Ups.
My father called them the Happy Flower. He said they looked like little smiling faces. 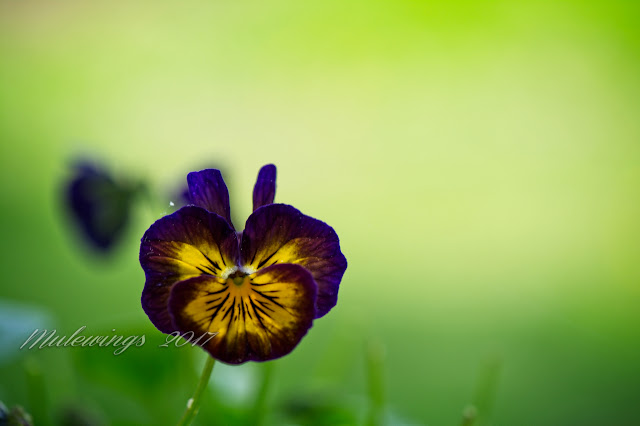 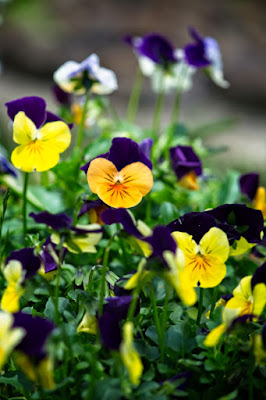 So I brought these home. Some will go in containers and some will go in the East Garden and ... well, I haven't thought it out yet, but the flowers will all find homes.
And I will smile at them.

I thought the porch could use a freshening up, so while waiting for a shower to pass, I washed it and scrubbed it with a barn broom. 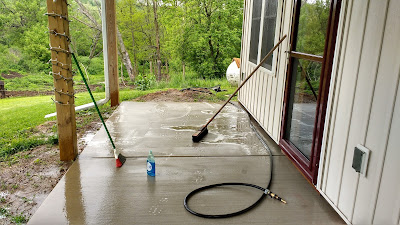 Then I while hubby took a nap, I went out and decided to do something about the troublesome area on the north side of the Big Shed.
Bob's Pen had turned into muck so I thought Bob could do me a favor and clean up the grassy/weedy area I had thought I could keep under control with a weed wacker. And I thought "Why waste the gas on a mechanical tool, when a donkey could do the job?" 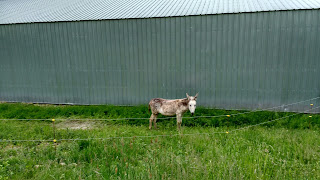 This is a poor shot from my cell phone, but you can see that Bob is quietly working on cleaning things up for me.

Next week I have some summer pasture work to do. I need to clean the brush off the electric lines. 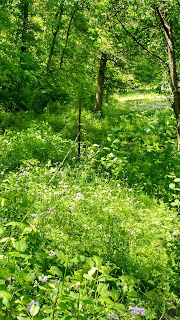 And I have to fix Lil' Richard's tie out line. He has some work to do also. 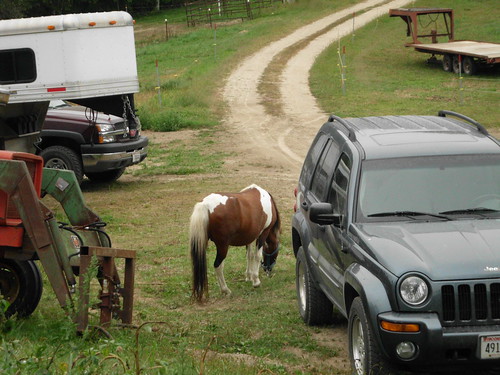 Last but not least, I must include my Supervisor.
Mr. Morris. 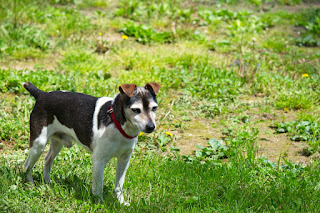