15 and the Farrier Visit 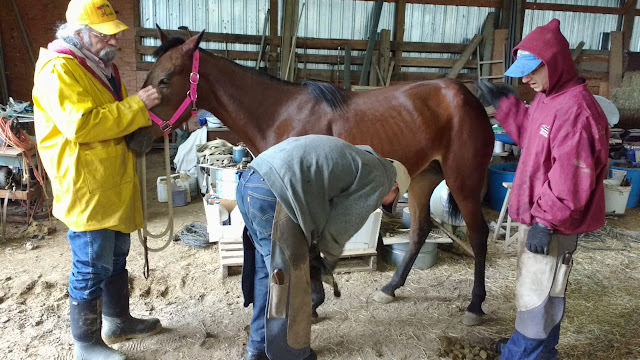 The weather was miserable. Cold, wet, rain, cold...wet, wet, cold...well you get the idea.
Dan and Danny Tesar came and we introduced them to our new horse/pony we call 15.
Yes she came from an Amish farm and needs a bit of filling out yet, but we have been so surprised by her super laid back and gentle attitude.  She was supposed to have been 'a good rider'. But as things go at auction, she really isn't what we would call well broke.
That was okay.
Rich and she got along so well. She allows him to do most anything with her. And she will accept a saddle and work with a bridle.

That was pre-stroke. We haven't messed with her except to feed her, clean her area, and brush her a lot. We had a bit of trouble picking up her back feet and I had meant to have her over that before the Tesar's showed up.

The Dan's worked quietly and patiently with 15 and trimmed her feet. She had a bit of an issue with her back feet. But the guys worked with her and concluded that she was not going to kick, she just didn't really understand and was a bit confused and frightened about having her feet worked on.

Rich stood talking to her quietly. She seemed to completely trust him and most of the time stood perfectly still.

As Dan and Danny finished up ... well something occurred that I'd never in my entire time with Rich seen him do.

15 closed her eyes and dropped her head to Rich's chest. Rich leaned forward and planted a kiss on her face.

I poked Dan as Rich turned to take her back to her pen. "Why I never! I have never in my life seen him actually kiss a horse!"

It is obvious that 15 is very important to my husband. She has touched him inside like no other animal I've ever seen. Not even his beloved Fred Mule.

We dragged in wet donkeys from the winter pasture and got their feet trimmed. Some donkeys behaved a bit badly. Normally they are calm and sweet. Dan thought perhaps it was the crappy weather.

I thought a bit and then realized that normally we have all of the donkeys clustered around when trimming. It was probably a herd sour issue. That explained that attitude of our quietest donkey.

Once the weather clears up, the donkeys will get summer haircuts and be bathed. Even Eddie the gelding I raised will be sold. However Bob, ever calm and steadfast Bob will stay. If ever there was a handsome, gentle laid back Jack, it is Bob.

I need to stop here and thank Dan and Danny Tesar of Dan Tesar Horseshoeing Co. for their excellent work and generous gift.
Rich is still pinching himself.

Hey...it isn't raining at the moment! How about some rain? It could get dry!
We only had an inch yesterday! 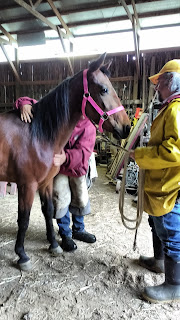