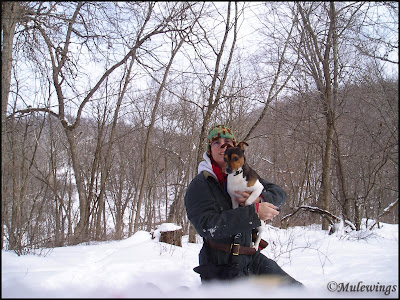 I got out! I really did! Not as early as I wanted to, I would have 'caught' the heavy frost and probably gone up on the ridge instead of down into the valley. Morris was very happy to go along although he probably doesn't look like it in this picture.
By the way, have you ever tried sitting down with snow shoes on? That part isn't hard, it is the getting up again that can be tricky.
I had a great opportunity to shoot some wonderful little water falls shots, but with no tripod the timed shots turned out...well awful.
So I'll just have to go back on another day.

I certainly surprised a bunch of snowmobile riders who didn't expect to see a dog and a person with a camera! I saw their helmets turn towards me as I fired off a couple of shots...with my camera, not my .22 pistol. They were the only disturbance we had out there.
It was a wonderful day adventure. At one point I climbed over rocks [picture this with snow shoes on!] to sit on a huge rock to get a better angle for a photo. I slipped a bit and gasped. Next thing I know I had a wet JRT who jumped into my lap.
I don't know if he was trying to save me or get warm.
But he stuck his wet snowy nose right on my polarizer filter.

Well no harm done. We trudged through the ice crusted snow to the end of the valley and I used my little video camera to catch some sights and sounds of the water falling over the rocks.