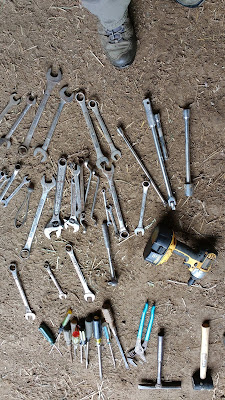 My husband is notorioius for not organizing his tools. He just drops them on a piece of plywood on top of a couple of saw horses.
Yesterday I need one tool as my project was to take apart the old picnic table that had rusted through.

After not being able to find what I needed, I started to unload the plywood and place it on the shed floor so I could see what we did have and didn't have.

I found screw drivers that I have thought I lost while fencing. Obviously they went back into the messy pile to be buried under debri. 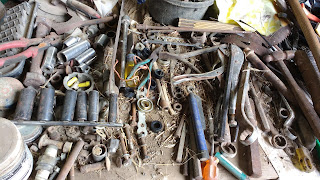 While searching [I never found the proper socket] I did find some other items of interest. 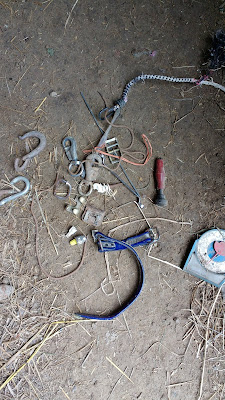 Broken things. Things of no use. They were also stacked on the 'table'. I sorted through some things and tossed them on the floor. I realized that I needed to find the tool I was looking for and not get sidetracked by the messy table.

I did find a 7/16 little hand wrench thingy... it worked. Along with a sledge hammer and a pry bar, I spent a few glorious sweaty hours dismantling the old picnic table.
I had to get creative as some of the bolts wouldn't unscrew, they were frozen in rust.

In the end I completed the task. 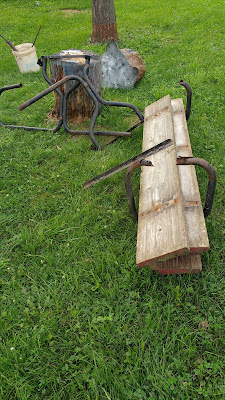 "You didn't mess up my tool bench did you?"
Ahhhh, I love how he thinks sometimes.

Mean old me. I pretended I didn't hear him and used the sledgehammer and the pry bar on a particularly difficult section. I then used bolt cutters to get the job done.

No cursing, no swearing, and no blood was spilled in the dismantling of the old picnic table. But one more job that had been on his list for over a year was now done.

I may get sidetracked the next rainy day and actually organize that horrid mess of a table. As of now, he has no interest in using it.
Getting him to leave the house is a monumental effort one I fight with every day.

However I should say he has fed the donkeys for two mornings in a row. I consider that an improvement.

Next up, the broken glider.
If I could only operate a chainsaw safely. All bolts on that are frozen/rusted solid.

Oh...what happened to those bits and pieces of 'saved' broken stuff? They went into my bucket of things toss away. I am cleaning up junk...one small bit at a time.

I have a full schedule for this week. But still plan on finding time for a couple of projects.

I imagine if I clean up the 'tool' table, it may come as a nasty shock to my husband.
I think I'll do it anyway. I'm still looking for that socket wrench.....
Posted by Val Ewing at 6:21 AM
Labels: broken things, cleaning, dismantle, junky, messy, old stuff, picnic table, shed, tools, why do we safe stuff?