So what has Charlie been up to lately?

Well he has been busy but I've been careful because of the high heat and humidity.
He comes with me in the evening and some mornings to help me do the chores. Well, he thinks he is helping, but he mainly just follows me.

My husband thinks Charlie is bull headed and won't come when called. And that is sometimes true especially if he can hear the neighbor kids or the golf cart that the parents have. I explained to Rich that all the children and Lauren come down on the golf cart to visit Charlie and take him for walks when we are at VA appointments.

Charlie adores the neighbors and absolutely loves the kids. They in turn love him back as he is not big nor is he intimidating.

Charlie still watches for birds to chase willy nilly through the yard. He enjoys sitting on the porch and overseeing his kingdom from his 7" perspective. He watches cattle, birds, mules, the sky and turns to listen to noises from afar.

He has learned that the porch fan is great for blowing away bothersome bugs and gnats. 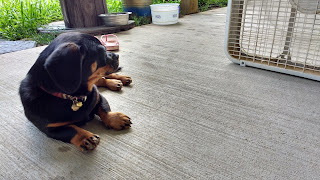 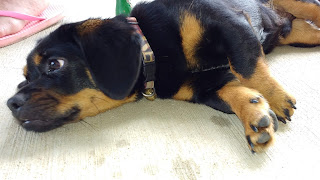 Taking a snooze with someone on the couch while they are reading is also a popular 'sport' of his. 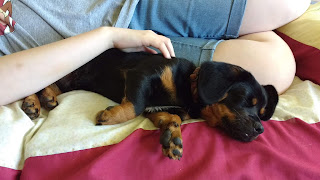 He prefers children to snuggle with like this. Occasionally I do lay down and read and he will come and stand on the couch and stare at me until he finally decides I'm worthy of his company.

He understands electric fences now too. Last week he touched a bottom wire and since then he refuses to walk by that particular spot.

He supervises me while I move the yard pony from one place to another for spot grazing around old equipment. He wants to become friends with Little Richard. But I think the size difference puts him off. 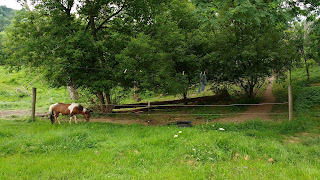 He will dart in to grab a fresh pile of pony manure and take a big bite. I think he does that just to make me screech "NO NO NO, ICK ICKY ICKY!"
I swear he smiles at me.

He likes bugs. He likes toads.

He loves to wake Rich up in the morning by laying on the bed next to him. I set him on the bed and the two of them go through a morning ritual of sorts. 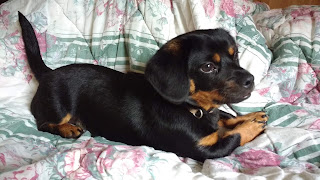 Charlie sometimes prefers to just lay back down and snooze.

He has a new funny and odd habit. He loves to go behind the couch where I have the clothes rack and the baby gate stored. Sometimes he just lays there and other times I think he plays games back there.... 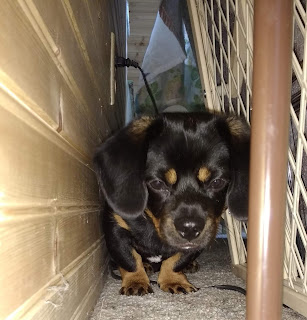 I need to figure out how to get him to grab the dust bunnies and do some cleaning back there too.

Charlie remains a sweet tempered dog with a huge heart. 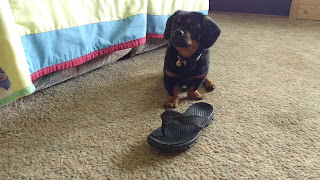 He loves slippers and flip flops. He doesn't really harm them anymore, he just likes to carry them around and rearrange them.