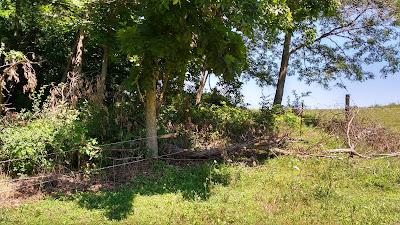 Fence fixing. This was a simple fix. That is until my Kenosha Pal teaches me how to safely use a chain saw. I knew the oak branch would eventually come down and the storm two days ago did it...

Without a lot of extra work, I just re routed the wires and it was good as new. The soft rope fence stretched but didn't break.
I was back in business.

This will be the mules next rotational pasture, they pick and choose differently than the Dexter cattle do. I'm even negotiating some pasturing for my neighbor's goats. I call them the clean up crew as they eat what the mules and cattle won't. What a perfect way to clean up the woods! Multiflora rose and briers BEgone!

While fencing I found ground bees. But they weren't the wasp kind. I was nailing temporary insulators to trees [think about carrying 15 t-posts through the woods for a temporary pasture]...when I heard and saw bees buzzing around near me. I kept going and walked slowly to work on another section of the woods.
When I came back they were still there. I stood still and watched them. Finally I saw a tuft of leaves that they were going under and into the ground. I made a mental note to not disturb them while putting up wire. The bees were foraging out to the wildflowers in the woods and they were very tiny and not colored like the ground bees that are so aggressive.

I tied Little Richard out next to the garden so he could use his pony power and do some organic trimming while I was working on other things. 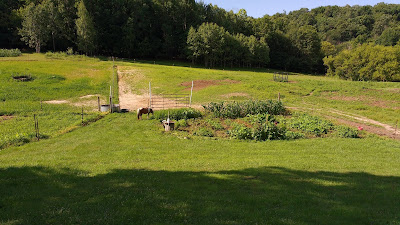 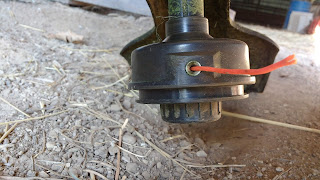 Rich came out and mowed part of the yard after instructing me on how to operate his mower. Is is a country clipper with a 'joystick'.

Time for me to start buckling down and learning how to use our machinery.
While he was preoccupied with the mowing, I sat on the 4 wheeler and read the instructions.
I was able to start it and turn it around and park it so I could mow in its spot. 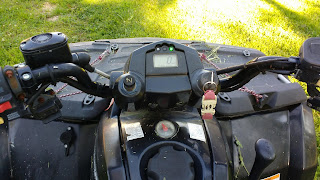 Hmmm. After supper I took it for a drive around the yard, then I drove it up the hill to the neighbor's house. 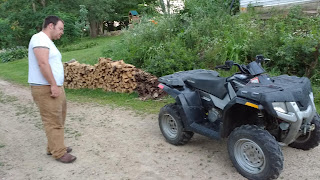 My neighbor came out and looked it all over with a bit of a glimmer in his eyes. I told him to take it for a spin and then teach me what the 'stuff' was on it. How to check the oil, brake fluid, and where the lights were.

Mr. Neighbor did and then showed me how to put air in the tires along with checking it out. He then asked if he could grease it. He'd gotten a new grease gun that attaches to the zirks and wanted to show me how it worked.
Mrs. Neighbor began to milk her goats while Mr. Neighbor worked on the 4 wheeler. Then Mrs. Neighbor came out with a frosty Pina Colada and life suddenly was very good.

I'd set Rich up with a Western Movie and so I had a bit of extra time to listen and learn more about the 4 wheeler.
After we said our goodbyes, I drove off with the lights on and got the mail then carefully drove back down the steep hill and parked it so I could hook up the little trailer to it and pile the fence posts, insulators, wire, and post pounder in it for the next days work. I was tickled to death. It meant I could make one trip instead of several. My alternative was to drag all of it in a 'sled' to the woods.

I stood in the dark, under the skies and just beamed. I felt energized and powerful.
Next up?
The Country Clipper and the ultimate? The Skid Steer. And...chainsaw? Eeeks...

I know that I need to learn to do these things on my own because eventually I will be solely on my own. This doesn't make me happy, but I am a realist. 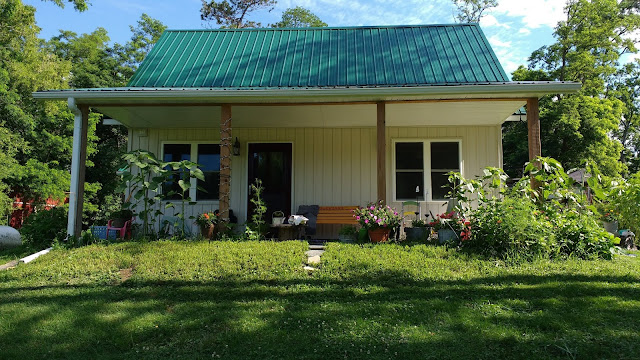 I love our little house and would like to stay here for a while longer.