One foot at a time.

I did fence off two sections of yard over the past few weeks, but the other day I decided, enough was enough,...I went to where hubby had bought his country clipper and got a used walk behind mower.

I also asked the gent we purchased the Clipper from to come out and help me figure out how to run the damn thing.  He is a good guy and will come out and give me a lesson!

So I went after the yard which was over knee high in places.  I attacked, the mower plugged.  I stopped, cleaned it and attacked again.

Over and over with frequent breaks ... I worked hard and harder. Yes...that wasteland is a part of my yard that I had to 'wade' through to hang laundry!

I worked all afternoon and nearly until sunset to hack at the yard.

Finally, the first mowing was done since last fall.  Can you imagine?
Since we'd had so much rain I didn't want to just fence it in and let the critters have the run of the place, I would have had a real mess on my hands.

Though after being exhausted and hot, I mulled that thought over and decided that maybe...maybe...it could have been an alternative.

I was hoping that having a mowed yard would help my husband's mood when he came home.

The grand kids were here and all were awaiting our arrival.  Steve had his week wacker out trimming, Steph was using my little mower to trim other areas, and in my absence they managed to make the yard look even nicer. 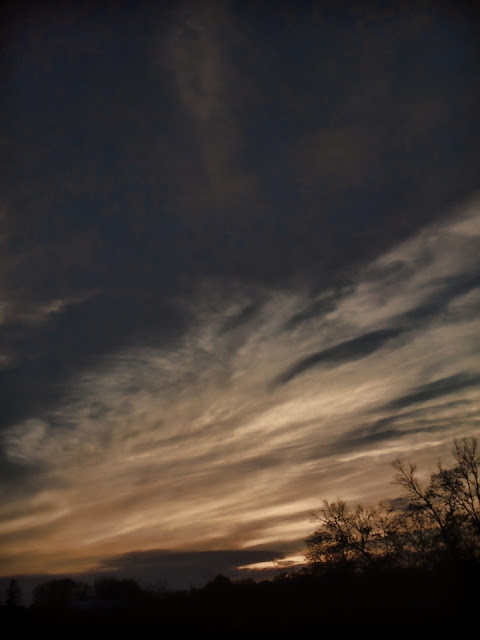 The sunset wasn't like this last night, it was rather dark and gloomy, almost threatening.

But all critters are fine, most everyone is on summer pasture...and I have 200' of electric fence to finish putting up and then everyone will be out in the woods and meadows.

Life almost feels peaceful today.
Grand kids are still sleeping and Morris is patiently waiting for them to awaken.

Morris will be going back to 'Uncle John and Aunt Nancy's' house tonight a we have another long week ahead of us.

He loves his job greeting patients at the Chiropractic Office.

Posted by Val Ewing at 7:08 AM
Labels: kids and morris, yard work