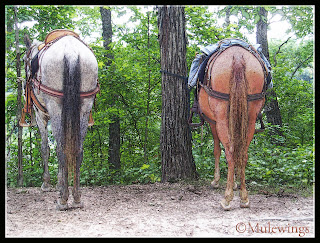 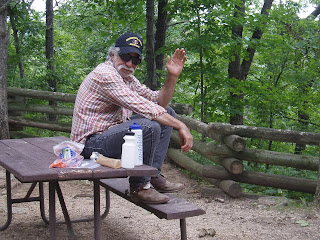 We decided to take Mica, hubby's grey mule and Sunshine to Wildcat. It was a spur of the moment thing.
Mica had been pastured all summer long and hadn't been ridden for over 6 months. I rode Sunshine ... she is sweet and an easy 'get on and get off' mule. She may be a bit short for some folks, but she's just right. 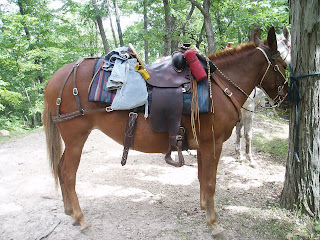 Not only that she has all sorts of 'little' mule power. Rich said she was a bit 'goofy' the last time he rode her at the park. [I think it was the rider not the mule!] 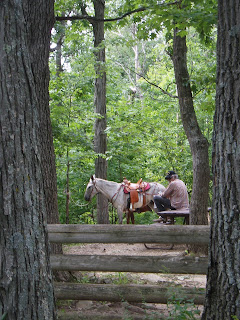 We had a picnic of bologna, cheese, and crackers. We rode, rode, and rode.
Mica is a fast walker and Sunshine showed she could cut the mustard by keeping up.

We had a laugh.
When we left camp, we ran into a group that was heading in. We made a short loop and came back through camp...that same group was now reclining. They waved and asked if we were all done in...
We laughed and said 'Heck no...we were crossing to the other side to do the Roscoe Trail'.

About two hours later we ran into them again while we were eating lunch. They asked...'Gosh, you all get around!' 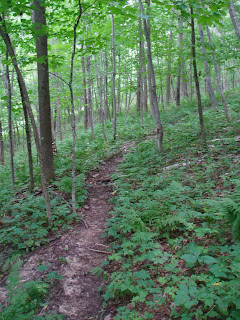 Four hours later we pulled into camp and rode past the same group who were lounging.
They stopped us.
'You guys been riding this whole time?'

We of course patted our mules, who admittedly were tired, and nodded.
'Gotta give these mules something to do...when they want to trail ride...they want to GO!'
Posted by Val Ewing at 7:22 AM