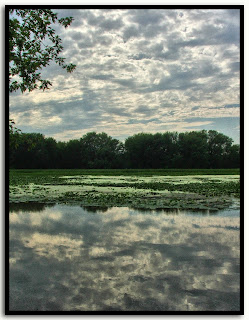 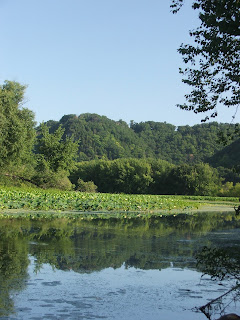 Okay we had a great morning in the backwaters of the Mississippi. We fished in more than one spot and caught a handful of fish!
While I was sitting on a rock in a place we called 'DeSoto Bay' when I looked down at the shore line and saw this little fella...
a snake...

Of course I was repelled at first, I mean SNAKE!
I decided to sit still and watch. 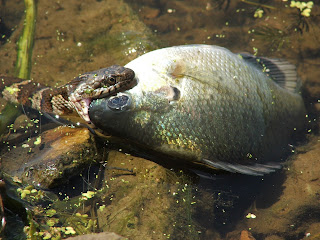 This snake was trying to swallow a small dead fish. It was fascinating. I thought for sure that this snake was a Water Moccasin which are considered very poisonous.
It isn't, it is called the Northern Water Snake, often misidentified according to the Wisconsin DNR site.

Description: This is a medium to large heavy-bodied snake. The background color is gray, brown or tan and is marked with dark brown, red-brown or black transverse blotches, which often fade with age. The underside is distinctive, white with bright red half-moons interspersed irregularly with dark gray speckling. Northern water snakes are usually found in or close to any permanent waterbody but they prefer clean rivers. Their diet includes crayfish, slow-moving fish and a variety of amphibians. This non-venomous water snake is often mistaken for a water moccasin and is subsequently killed. Water moccasins, which are venomous, do not occur anywhere near Wisconsin.

He was pretty entertaining to watch. Of course I had to video him...I mean, come on, what else did you expect me to do!

By the way, he/she finally gave up and swam away.