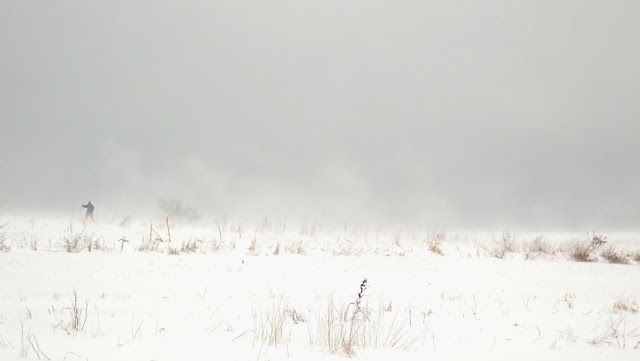 Justine came down with his tractor and cleared the driveway and the little turn around. He said his wife and kids were going skiing.
I thanked him and ran inside to change my clothes and grab my dad's old skies.

I did a very quick change and re-dressed from doing chores into a face hoody thingy, goggles, knit gloves, and snow pants!

I got up to the ridge and put on my father's old skies and took off across the crop field. I caught up to Lauren and the kids out in the wide open.
By the way, Dad's skies were awesome. I literally felt like I was flying. I guess I can't help but smile knowing that I am using his skies. Feels like he is with me in a way.

I suggested we go up towards the woods where we could get out of the wicked winds that had Sno-nadoes whipping up all around us.
Lauren agreed and then stopped for a moment.

"I have an Up-day Gift for you!" she said reaching down inside of her coat.
I smiled at that. Up-Day was giving someone a gift for reason other than making them feel 'Up'.
She handed me a package of extra long socks that had little wiener dogs on them! The package had three sets of socks. The socks will go up to my knees and are thin enough to wear under a pair of my wooly socks.

We played for a while and then headed back to our places. 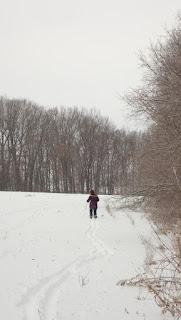 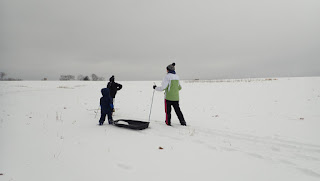 I can say that my neighbor's kids are no strangers to outdoor activities. They take cross country ski lessons in the winter and do indoor soccer.

I did some indoor crafts yesterday. I experimented with polymer clay. I've never worked with the stuff before, but decided to have some fun. I watched some tutorials on making a fairy house and little mini mushrooms and thought I'd try it with the air dry stuff before actually making the home made material I'd seen being used in the videos. 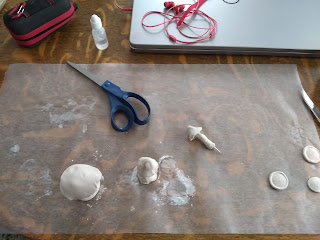 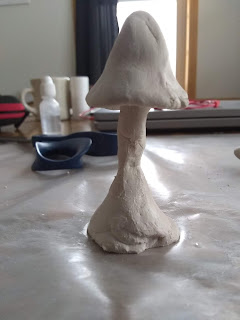 These can be painted after they dry.
I tried making a fairy house which used things I had around the house. 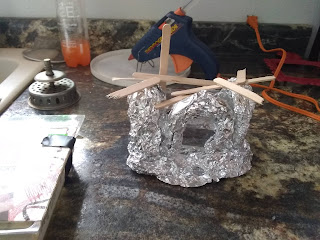 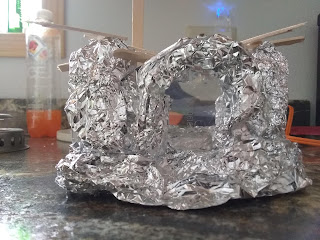 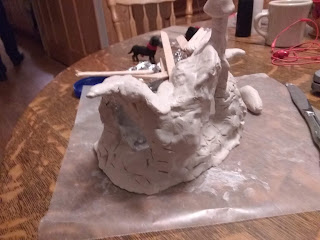 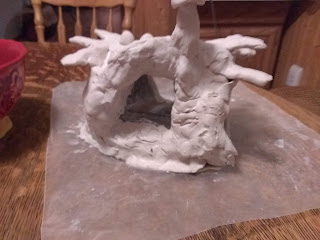 So. Overnight the tiny 'mushrooms' I made have dried out nicely. The lady in the video I watched had said that air dry clay would crack as it dried if used on the project she was doing.

Um. Yep, she was right. This morning I have a cracked up gnome looking house. 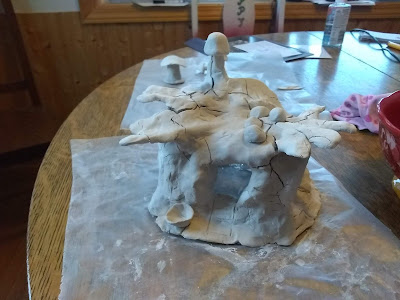 I don't see it as a failure as I can let it dry and then fill in the cracks....or I can leave the cracks and paint it so it looks cracked and gnarly!

The materials for making a air dry paper mache clay with household items is pretty neat. It involves toilet paper, oil, glue, and patching plaster. Who knew?
I can see making that and trying it on one of these wicked awful cold and blustery days.

Then again.  I would probably have to take a walk to the creek to see what has frozen over also.

Oh. One last thing. I was feeling so crafty the other day I bought some felt pieces. When we were kids we made clothes for our trolls out of felt.

I made LIL Bear a jacket, hat, and scarf. After all, LIL Bear needs to be protected in this cold weather too! 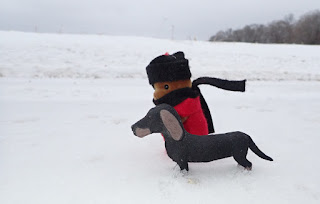 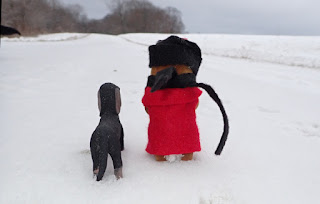 One must bundle up properly while walking your dog!