Rich hasn't felt well enough to go visit his mother. It isn't a very long drive and we could do a short stay.
However he still fights for oxygen saturation. If he walks across the floor...say 10 feet across the house, even with 02 flowing, ... his 02 drops into the 80's and takes a few minutes to come back to a low acceptable saturation.

Talking exhausts him. Quiet conversation between us is halting with a little grunt or look from him. Like clockwork now he gets up about 9AM. I get his coffee, help him with getting his breakfast and meds. By 10:30 he is ready to lay down.
If we are lucky, I fill him in on what I have to do on the 'farm' and errands I may have to run by then.

Today I used his 'nap' time to run to the feed store and get mineral salt for the mules and sweet feed for Mica who needs more calories than she is getting. She is a hard keeper and has been since she arrived her 17 years ago.
I was able to fit in a CrossFit class and I'm glad I did. It felt good and I met some different folks.
All ... very nice.

Burpees, Box Jumping [I jumped on and off a stack of 45 lbs weights], jump ropes, ... that was our WOD at AMRAP. WOD...work out of the day. AMRAP...as many repetitions as possible in a given time. This was after 3 sets of 500 meter rows combined with bar lifts and shoulder touches. No worries, this was all foreign language to me a while ago. But the end result is that I felt good afterwards. I felt relaxed and ready to take on the rest of the day.

I grabbed 50lbs of feed and a salt block and headed home in time to wake Rich up and feed him a later lunch. All was good.

During his afternoon nap, I moved Mica to a separate paddock next to Little Richard, filled the large stock tanks and filled Mica and Lil' Richard's water buckets.

Charlie and I spent the rest of time tidying up some loose end on a few items that needed a quick fix. Like the place where a deer had broken a wire.

I gathered my fertilizer [the kind that melts ice] sand, and old hay chaff together. This combination is my secret weapon for ice.

We are supposed to get some snow tonight that will turn into rain. On frozen gravel roads and driveways that causes the road to become an instant ice rink.
If we get the heavy rain we will have creeks and rivers rising from the quick run off.

Yesterday was a 'free' day. I did chores and not much else. I did put Charlie's Christmas sweater on and took him to see my MIL. I took some shots of her with Charlie and sent them to a few relatives. 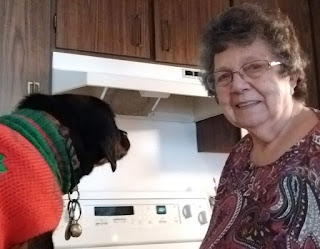 Funny. My MIL has always said she didn't like dogs. She likes Charlie.

Charlie also met another resident who asked if he could pet him. I said yes. The resident gave Charlie a ride in his wheelchair.

Charlie made the day for some of the folks at the elder apartment building.

Yup. I think I'm set up for the winter storm. I wonder if it will track this way or go north?