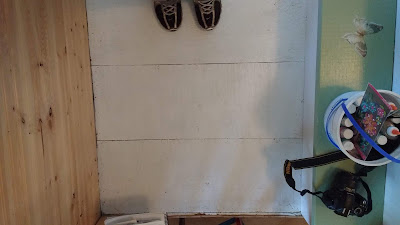 I started with this.
And then I started to just doodle with a pencil. 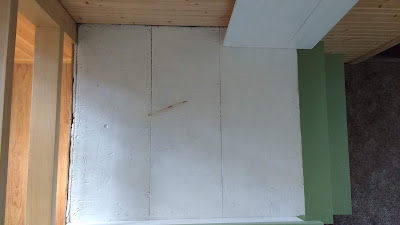 And then I started to doodle with paints. 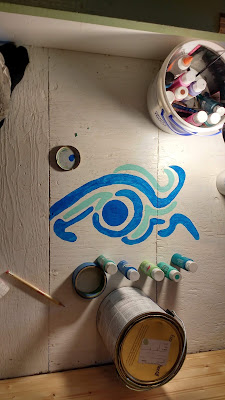 I should have thought this out because after I got the doodling in, I realized I needed to repaint the white surface as it looked dingy with the bright new colors. 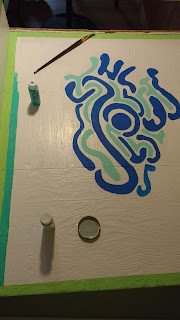 So, I went and got wood filler for the cracks and filled that in. Then painted the large area white and took a small brush to do the areas in between the doodles.

I also got the bright idea of making some trim around it, as if to frame the design in the middle.

Okay, my work flow is a bit bass-ackwards, but it is turning out nicely. 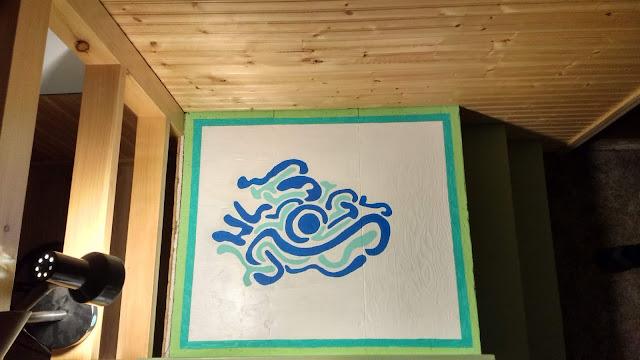 There. That is the almost finished stair landing. I won't be doing any more doodle marks, but will leave it as is. It feels just right to me...not centered, not symmetrical, and certainly it stands on its own. It doesn't match any other color in the house which is fine with me.

I need to put a couple of layers of clear coat on it to "hopefully" help it survive foot traffic when I have company. I may put a soft rug over it during that time too.

The ol' Grumpy Guy didn't complain at all. He watched Netflix and was more worried about what I was making for supper. He didn't have an opinion on the landing at all. At least he didn't voice one.

Rich did ask what I called that stuff on the landing.

I couldn't explain it...

But then I found this...

It just comes out of my subconcious.
If you asked me to draw you a doodle, I couldn't do it.
~~ Lois Frankel

That sums it up in a nutshell.

Posted by Val Ewing at 5:47 AM
Labels: art, colors, doodling, just because, painting, stairs, The landing