Friday was an interesting day, the mail lady pulled up to the house with her 'newer' Jeep and delivered a package. It was a large box.

I opened it and found a letter from my cousin's wife explaining what was inside.
Slides from 1962, 1964, and a vacation that my folks and grandparents went on with my brother to Yellowstone.
Included in the package was an 8 by 10 of a family 'portrait' of sorts. I found this quite unusual as my father was always the one behind the camera and I rarely recall him being in many photos. 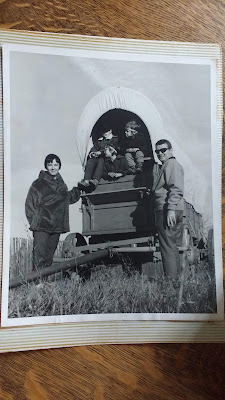 Also inside the box were some items that my Grandmother Pearl had made. I found a spiral notebook that she used to collect her directions on how to make doilies. Samples were included in the book. I imagine she cut the directions our of a newspaper and glued them into the pages of the notebook.
There are some hand written notes on many of the pages. The pencil notes are nearly faded away, but there were some in pen also.

I found the items perfect for some Still Life on a very rainy day.

The pin cushion is one she made and the pins are still in it from Grandma's sewing days. 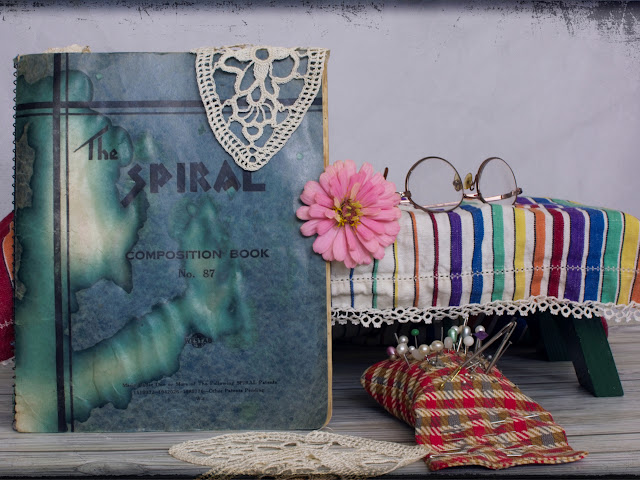 Other treasures include some hand towels that Grandma re-purposed from old beach towels. And some of her very famous patchwork potholders. One is not quite finished but now I can see how she did them and perhaps make some of my own.

I'm looking into getting some slides copied onto a DVD. There are photos of my sister and I riding Babe which was my Uncle's horse. One funny and great shot is of my brother sitting on Dusty backwards and my cousin Aaron sitting facing forward.

I've looked at pricing a slide scanner just for that purpose, but there isn't that many in this batch. My brother I believe has a huge box of slides. I'm going to use a local scanning service first and see how that works out.

I don't have the thousands of slides like my brother does, however I am curious and a bit excited to be able to see some of those old photos ... without trying to hold it up to a light bulb!